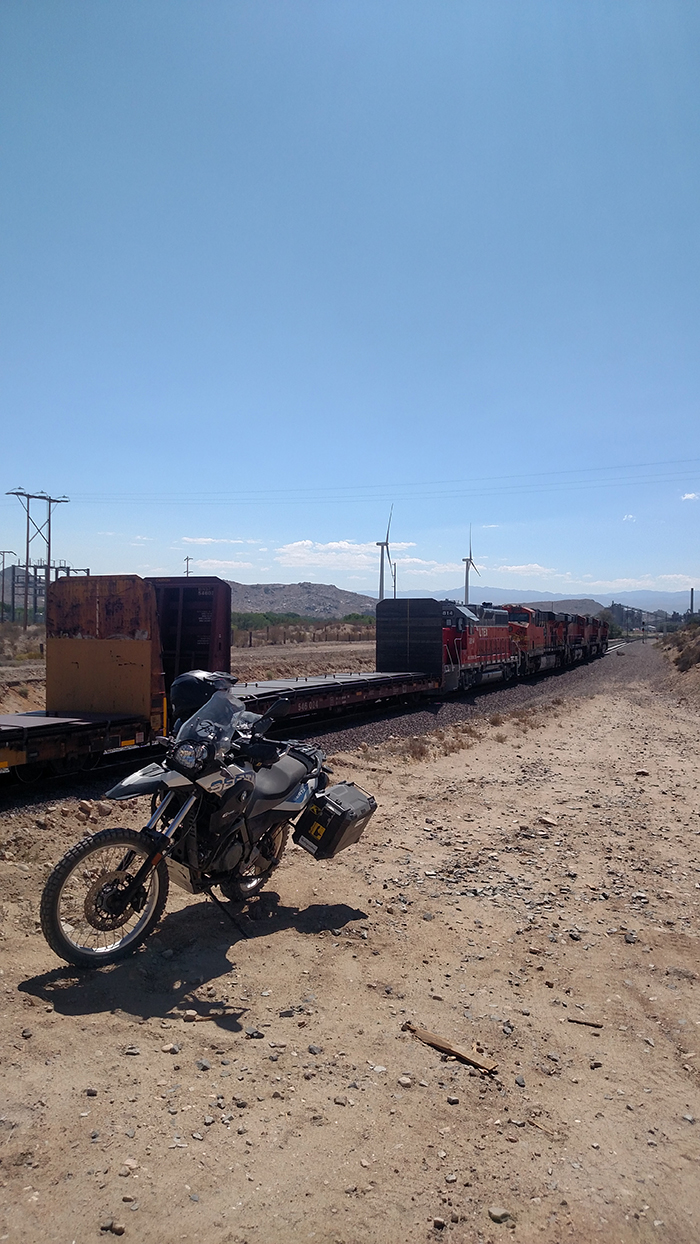 All good things must come to an end. Unfortunately, this isn’t true of all bad things. This was the thought that kept running through my head as I spent two hours attempting to extricate my bike from a small pit that was barely bigger than my bike itself. But we’ll get back to that…

A full year has gone into this gentlemen’s bet between Gary and I. We bought dual sport bikes, learned how to ride them in dirt (and Gary learned how to ride a bike period, as this was his first), we upgraded to BMW 650 adventure bikes, outfitted them for overland motorcycling with equipment, and then learned how to ride the fully laden beasts offroad. However, we weren’t in lockstep on all points. Indeed, because of our personalities, our strategies and tactics diverged almost immediately upon kicking off The Bet. Gary is a “learner” and likes to read about equipment or techniques before trying them. During the course of this year, this generally meant he was much slower to attempt new skills or difficult situations during our offroad training. But once he had done the homework on it, he would generally crush that skill with no problems. I am more of a “doer” who (violently) hurls himself against new situations and obstacles to learn. Sometimes this meant I gathered skills and experience faster than Gary, sometimes it meant a broken bike or body.

I was also much more willing to allow for broken bike parts, though, as I’m more mechanically inclined than my opponent. In fact, just a few weeks ago he happened upon me out in the garage practicing a tire tube change in case I got a flat. I was struggling mightily (because I was doing it wrong…); he took one look at the sprawl of parts and tubes and decided he wanted no part of it. He declared that it was “unrealistic” to expect to successfully get the morbidly obese bike up on its center stand, remove the rear axle, and change a tube while in the wild of the desert. He decided to risk it instead.

One thing we agreed on was meticulously planning our individual routes on Google Earth and creating rally pace notes to guide us on our two day solo journeys across the desert from LA to Las Vegas. A quick reminder of the rules: we each had 100 miles to get out of LA, and then we had to be off any kind of paved road. After that, we each had 30 miles of paved road to use as we wished to get gas or avoid obstacles. Riding was only allowed between 6am and 8pm, and we could rejoin roads within 10 miles of our destination – The Bellagio Hotel. And so it was that we packed what supplies we each thought we’d need, set up our secret routes, and headed out of LA at 7 AM on Friday the 26th of August 2016 – one year from when The Bet started.

For me, the race stared on an almost immediate wrong turn – literally. Gary and I rode together through town and onto the first freeway. Then, at the first freeway interchange he thought we were both taking, I made sure he was in front of me and ducked back off the off-ramp at the last second leaving him careening towards his offroad starting point and me towards mine. It was 20 miles after this, when I was feeling ever-so-smug about fooling him about my route that I absentmindedly merged onto the correct freeway but heading the wrong direction. Instead of seeing the San Gabriel Mountains, I started seeing signs for the beach and the very freeway I had left Gary at. Pulling over and consulting my map, I found I had indeed travelled 30 minutes back towards the coast. After being so diligent at marking my rally notes with the direction of every dirt trail and path I was going to take, I neglected to mark the direction of the freeways. An hour wasted just getting to the mountains that denote the end of Las Angeles and the beginning of our offroad portion.

Finally off the tarmac, progress proceeded smoothly… at least for a while. The BMW acted with aplomb even fully loaded. There were a few sections of my dirt path that were unexpectedly fenced off and I had to use about a mile of my 30-mile allowance to get around and back to dirt, but other than that it was smooth sailing. As civilization faded more and more behind me, I finally encountered the sight that signaled my secret plan – railroad tracks. You see, rather than pick through the spider web of dirt trails and single tracks that crisscross the desert like Gary would be forced to, I had an alternative plan. A good friend of mine pointed out that all railroad lines have truck-wide access roads running alongside them that are smooth as butter at least as far as dirt roads go. And wouldn’t you know it, there’s a rail line that goes directly from LA to Las Vegas. This was my masterstroke that meant even with my wasted hour, I’d still finish ahead of my rival. In fact, I was so confident in my route that I booked the Vegas hotel room a night early because according to my math, I would get there in one day instead of two.

So I came to the first railroad track and immediately attempted to go for it. And I got stuck. Rails, it turns out, are the perfect height to stop my back tire from finding purchase. Gingerly, I backed the bike off the tracks and realized that a major assumption I had made – one that would have been easily testable at any point of the year leading up to this – was dead wrong. I would be stuck on one side of the tracks or another until a pre-built crossing point came up. Undeterred, I progressed forward on my access road for a few minutes when a train came charging down the tracks. That is to say, less than 10 minutes after I had gotten my bike stuck trying to cross the track a seventy billion ton train came down that line at 60mph. So much for the second assumption that the line would be quiet. In fact, I had trains coming along every 15-30 minutes. This became especially “fun” an hour later when I had my first one through four of 14 total crashes.

The rail line had come to a ravine and my access road disappeared or split off where I didn’t see to follow. There was plenty of room on the basalt rocks surrounding the rails for me to get to the other side of this cut in the hill, and I successfully did so. But then following this section, the rail was built atop a tiny culvert that was meant to carry storm water under the line. The culvert was no more than 10 feet long and there was barely enough room for my tires and feet to scoot by on an aggressive angle, but if I slipped I would have fallen 10 feet down into the culvert. Rather than risk it, I decided to ride down the steep side of the culvert then gun it back up the other side. This was a terrible idea.

Fall #1 of the trip came just going down into the little valley no wider than my bike. Fall #2 came after I spotted my access trail off to the right, but blocked by a sandy berm that offered my tires no grip. Fall #3 came after I turned the bike sideways and attempted my original idea up the other side back to the tracks – again no grip was on hand and it was offensively steep. It was midday, 100 degrees according to the forecast, and I was wresting a 400 lb+ bike in full Klim motorcycle gear for about an hour while trains tore by at about head height. Needless to say the headache I felt come on was a bad sign of heat stroke and I needed to take a break. I tore off all my gear, grabbed my gallon jug of water, and crawled into the water pipe for shade and contemplated if and how I was going to get out of this increasingly hopeless situation. The emergency beacon on my chest was ever-tempting as there were only three ways out of this culvert, and I had failed at all of them.

After an attempted rest inside the shaded water pipe – trains going by four feet directly OVER you are even more disturbing than trains going by eight feet beside you – and a good drink of a liter or so of water I had a plan. Firstly, I took the lid off my SW-Motech pannier. Then using it as a shovel, I smoothed out the sandy berm leading back to the dirt road. Then on this ramp I had created, I scattered the railroad’s rocks. Finally, I collected all the scrap wood I could find and laid this on top of the rocks and tamped it all down by walking over it. I had built myself a road to freedom (hopefully), but if it didn’t work my race was likely over and lost. I removed the panniers for added lightness, picked my tire tracks, and fired the bike back up. A train came by to bear witness and I gunned it towards my ramp. My bike scooted up the improvised road, destroying it in its wake, but nevertheless depositing me back onto my trusty dirt road. Never does victory tasted so sweet than when it is snatched from the jaws of an emergency rescue team.

After reattaching my luggage and traveling on for some time, I realized I was suddenly in a race. With an hour lost on LA’s freeways and at least 2 hours lost in the world’s smallest and cruelest valley, there was no way I could get to Vegas before the agreed-upon sunset curfew forced me off my bike. And as this trip had already taught me, the going even on my access trail was anything but easy. In my mind, Gary and I were now neck-and-neck. Suddenly the tent and sleeping bag I brought just to fool Gary were very necessary.

The rest of that day had decent speeds, undeniably beautiful views of the Mojave, trestle bridge crossings, and a few more falls. I had been ingesting Clif bars all day and on my last fall I decided to partake in another and read the nutritional facts. Huge mistake number three (or four; who’s counting?) dawned on me as I realized I had only taken in 1,500 calories all day and would need my last two bars to get me to at least midday tomorrow and the only gas stop of the second day. This lack of energy hit hard as the sun began to set at 7 PM and I encountered my fifth sand patch of the day and crashed a few more times. Although it would be soft for my sleeping bag, I refused to let it beat me or to start my day tomorrow stuck in this horrible excuse for substrate. I pushed on and out, finding solace on the rocks of the train track, and rode on half-blind with hunger and fading light. Finally, at 7:45 PM, just 15 minutes before curfew, I spotted a secluded and solidly grounded spot to camp and preceded to hangrily set up my tent for a night in desert.