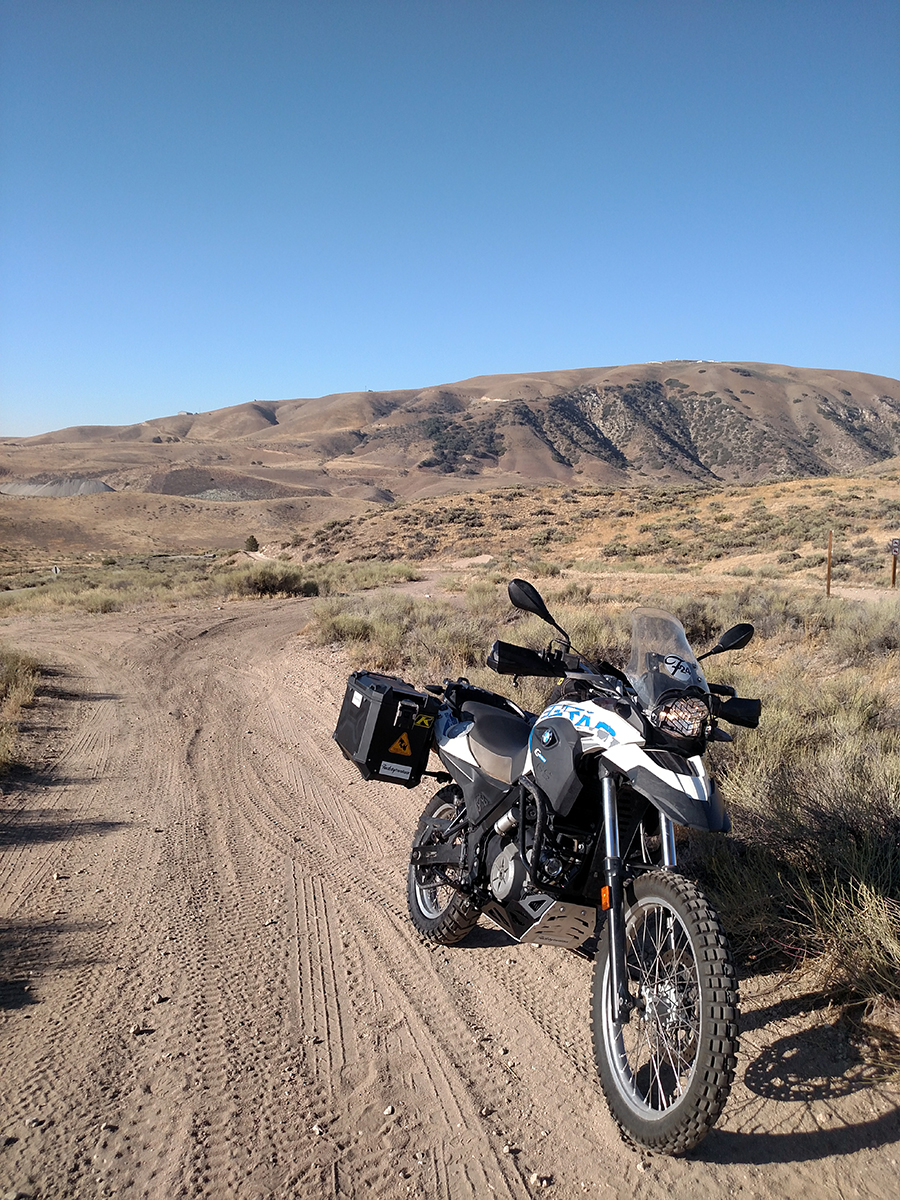 Having started the race on around four hours of not very solid sleep, not eating enough, and generally beating the hell out of my body for 12 hours, I slept like a sack of wet dirt. I slept so well in fact, that I didn’t wake up until 7 AM – an hour after sunrise and the riding curfew ended. Mistake number four, and another hour lost. This day brought much of the same – breathtaking scenery, sand, decent speed, not decent crashes – and was overall proving to be much more difficult than I had imagined. After my last fuel stop, and another protein bar taken in, I was headed towards my last 43 miles until civilization and the finish line.

It was this stretch, this final stretch, where I really had fun. The dirt roads were excellent and allowed for 50 and even 60 mph in spurts, but moreover they were fun roads that the BMW could lean and buck with. 10 miles down, then 20, then finally 30 miles were consumed rapidly. With only five miles until re-entering tarmac, my final disaster struck. It was 3 PM, I was still low on calories, and I was mentally worn down from all the fast offroad riding and the impending end of the race. In the middle of wide-open track, with flat space surrounding me, I hit the only boulder around, smashed off my right-side pannier, spun the bike around and crashed hard. I was beside myself with fury and rather than attempt to fix anything decided to press on. I rode that fury through the last three miles of dirt, harnessed it on the Las Vegas freeway to zero in on The Bellagio at not-quite legal speeds, and finally felt it leave me, now more drained than before, as I approached the check-in counter at 4 PM, not sure what my fortune would be.

The helpful check-in girl didn’t bat an eye at this disheveled human with wild hair, a dirt-colored face, strange technical clothing that squeaked with every movement, and more mud and dust than the marble palace of the Bellagio had likely seen in some time. At first she couldn’t find the reservation – only natural since it was for the day before. And when she found it, her puzzled look didn’t go away. She looked up, and with a fake customer service smile informed me that someone else had already checked into the room.

Gary had checked in at noon; four hours ago, or exactly the amount of time I had lost because of my many and various mistakes. Crushed, I collected my key and squeaked my way through the tourists and their casino to ride the elevator up towards the victor. For 23 floors I debated what I would, what I could say to Gary. Stepping off the elevator, the dread closed in and I made my way towards our room. Resigned, I flung the door open, reached out my arms, and belted out “Congratulations to the Better Man. You deserve it.” At this, he was very confused. With a quizzical smile, he asked me, “Why, did you get disqualified too?” Much confusion abounded. “Did you get my text? I disqualified myself.” I was too off balance to know how to react, but slowly it dawned on me that I had won. I HAD WON! After all the pain, and misery, and effort, I had won.

Over a much-deserved steak dinner that night (after the greatest shower man has ever known), Gary relayed his story to me: He too had a secret plan to follow access roads (power lines for him) that would see him finishing in a single day as well. However, an hour into his offroading time, he ran afoul of a nail and got a flat rear tire – the very situation he had declined to train for. To his credit, he somehow rode that flat tire in sand for 15 miles (that’s basically hard mode) into town. Then he had to be towed 20 miles into a slightly more real town to have the tube replaced. Hours lost, he had to then ride those 20 miles back to his offroad route. This unexpected detour guaranteed he would go over his 30 mile paved road allotment for the race and sunk him completely. He spent the rest of that day offroading on his trail (like a champ), and then stayed at a hotel that night. The second day, he woke up and took the freeway the remaining 30 miles into Vegas since he had already lost, and that is how he got there four hours before I did.

This was a year in training, capped by two very hard days for both of us. The race was significantly harder that I thought it was going to be, and that’s what made it excellent. We both know that the race taught us a lot – in skills, experience, and broken parts. But the biggest thing it taught me was that I want more of these overland motorcycling adventures.

A huge thank you to all the sponsors of The Bet: Klim, SW-Motech, Twisted Throttle, Wolfman Luggage, and REV! IT.

We’ll have video of this adventure coming soon…