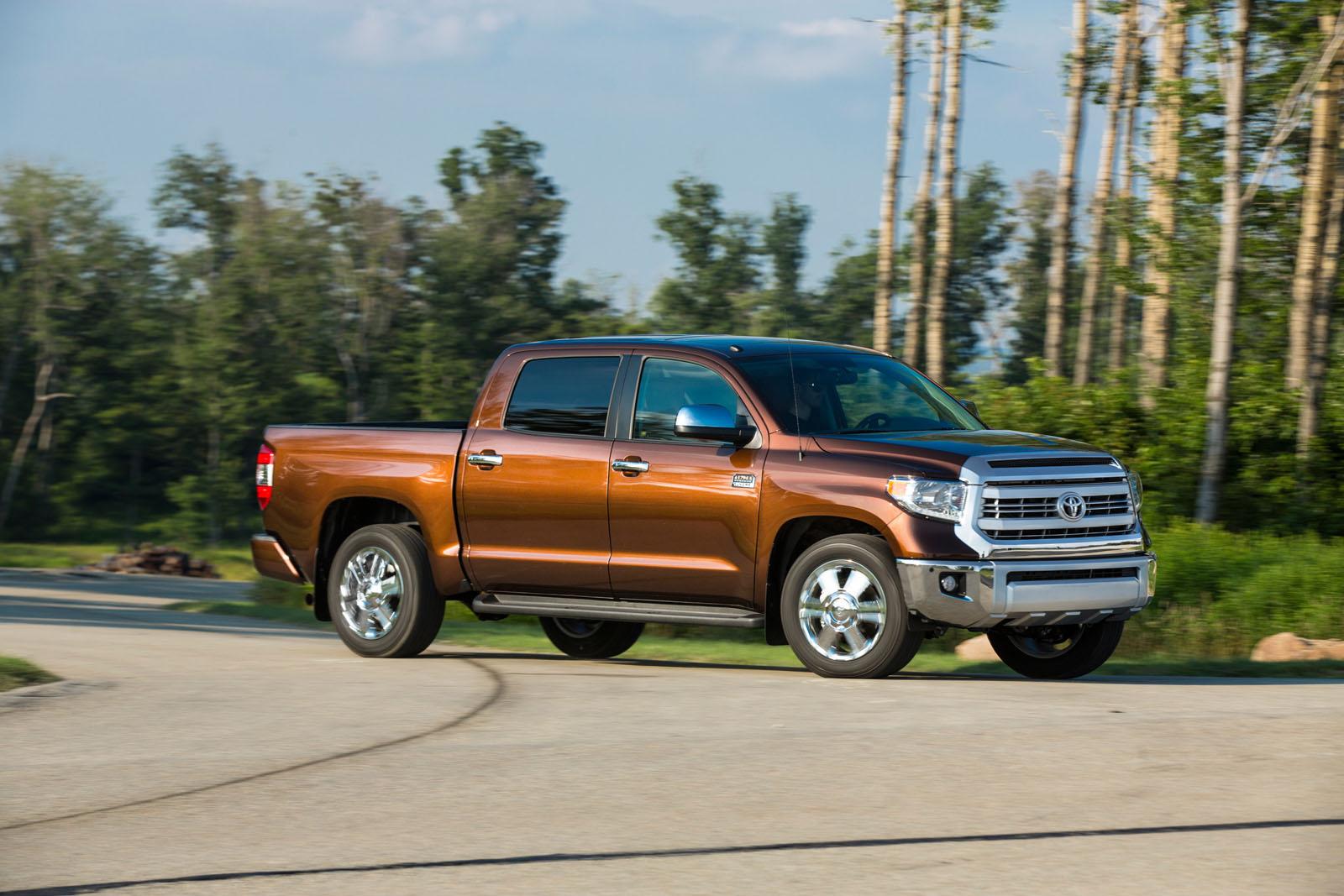 Is the 2015 Toyota Tundra CrewMax winning hearts of loyalists?

We’ve been used with previous versions of the Tundra to provide a pack including a decent workhorse in the full-size pickup segment while being almost the only one taking the off-road concept to its real value and not providing a misleading SUV-like performance in dirt and above-knee snow level. However we also know that the American full-size pickup segment sells to loyalists rather than opportunists so 2015 Toyota Tundra has no other way around than winning the hearts and souls of Ford and Chevy owners in order to get sales done.

There is a complex of choices available for the 2015 Tundra, including the currently reviewed CrewMax 4-door cabin and the equipped TRD Pro offroad package. The CrewMax cabin can hold either 5 or 6 seats, depending on how the buyer chooses to equip. Choices are also available in terms of bed length (5.5 ft., 6.5 ft. and 8.1 ft.) and wheelbase (two options available).

The TRD Pro package is the single off-road focused package currently offered by the 2015 Toyota Tundra. It comes with the CrewMax cabin standing over 18” alloy wheels with Bilstein shocks providing a 2-inch heightened stance, a TRD dual exhaust, front skid plate and a 7-inch Entune touch-screen. All the other elements are taken from the SR5 package which also comes with double cabin or CrewMax. On the outside, unique body elements are separating the SR5 from the TRD Pro.

The 5.7 liter V8 engine is the standard feature on TRD Pro trim, coming along with an AWD transmission delivering 381hp and 401 lb-ft of torque to the wheels. Unfortunately, news isn’t very bright when we come down to the amount of fuel ingested. Tundra scored an EPA average of 15mpg combined, noticeably lower than the segment average. On the other hand, acceleration tests have shown that the TRD Pro trim is able to reach 60mph in 6.7 seconds, being quicker than the average of the segment.

Driving the Tundra TRD Pro makes one realize that there is no way on Earth they could’ve made a better choice of a V8 engine. While it may not be the king in terms of horsepower, it rules the world of towing thanks to its incredible torque output and a perfectly engineered six-speed automatic gearbox. Coming standard with a tow package, the 5.7-liter V8 is able to carry up to 10,500 pounds on its tail. The twin TRD Pro exhaust will be there to get a roar inside the cabin on quick accelerations.

Easy to reach dials and buttons are handling climate control and radio functions inside the Tundra TRD Pro. While the choice of materials and built quality is no more than acceptable (but neither less) on standard issues, upper trims provide nice leather insertions. Front seats are large and comfortable for the times when you want to be pampered while the truck is hard at work. Still, don’t expect a big amount of lateral support; it is still a truck.

Checking in with Tundra’s safety department, we’re getting to see an anti-lock braking system, stability and traction control as well as trailer-sway assist. The cabin comes highly equipped with airbags (knee, front and curtain) both on the front and the rear seats. It’s one of the reasons why the Tundra got a 4-star safety rating on front impact and 5-star ratings on side impacts.

It’s hard to say whether the 2015 Tundra is able to overcome opponents such as Dodge Ram or Ford’s aluminum built F-150. While it clearly overtakes any neighbor in terms of towing power, Toyota Tundra TRD Pro comes along with a disappointing fuel economy rating. Still, the nicer than before interior and a collection of multimedia applications may just tip this truck inside the yard of a Chevy or Dodge loyalist.