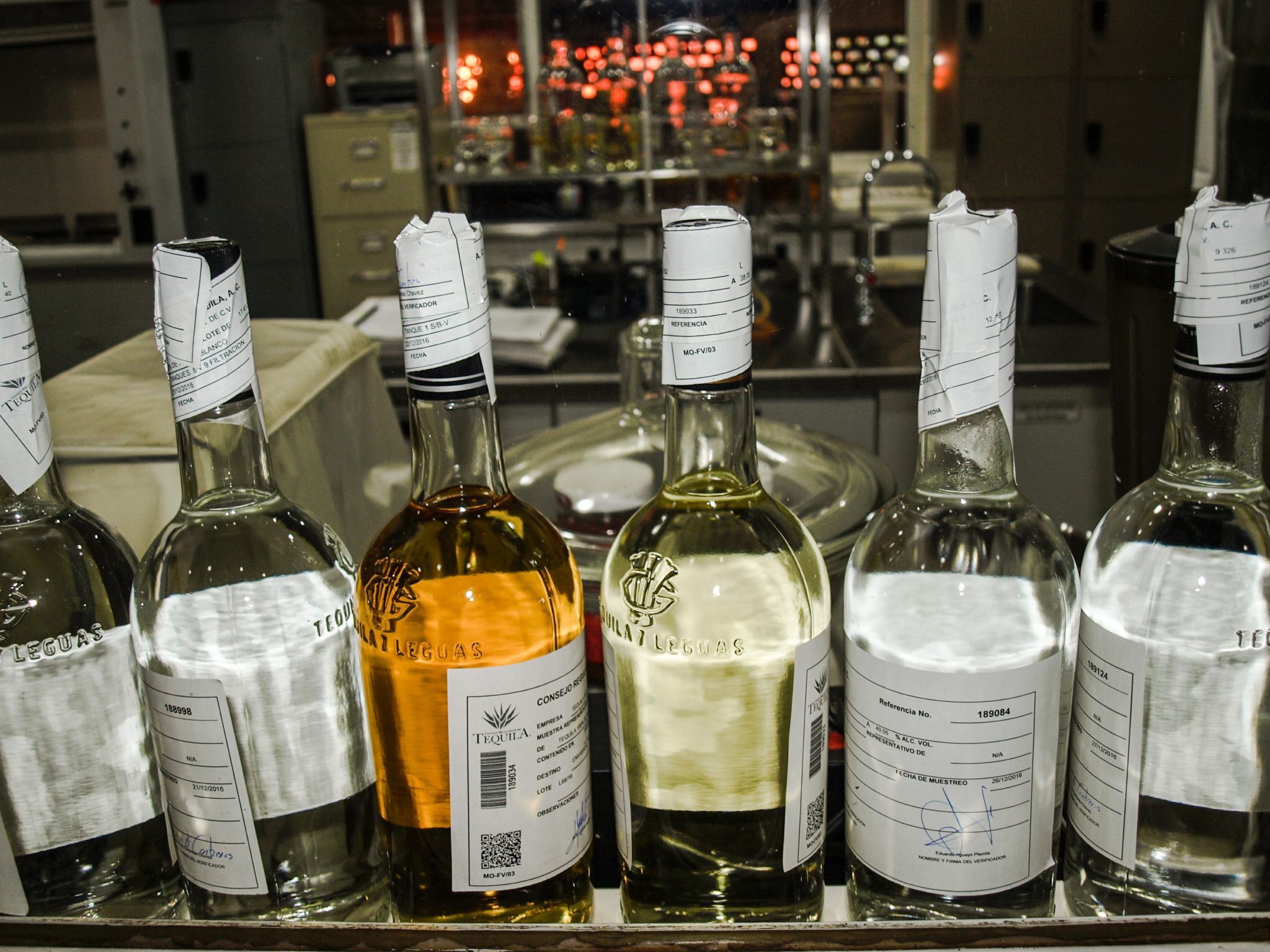 Off the Beaten Path: Adventures in Tequila Country

We moved slowly downhill through the dark forest. Rocks were slick under the thin soles of my huaraches, punctuated by the jolt when I stepped into invisible potholes. Beyond the road, I could hear noises in the woods: dry oak leaves cracking on the ground, the snap of twigs. Something was lurking nearby. A deer? A man? It occurred to me that we were trespassing, on the side of a volcano, in a country famed for its rural drug operations and violence.

“It’s probably just a flock of wild turkeys, like that time in California,” I said, taking a swig from the bottle of Siete Leguas and handing it to Rich.

We were scrambling down the side of a volcano in the dark because I’d had a romantic notion that it would be fun to watch the sunset from the rim of the Tequila volcano while drinking tequila.

Inland Jalisco is the epicenter of Mexico’s tequila industry. Agave, or maguey, is everywhere—the spiky blue-green plants cover the rolling hillsides and grow around houses. Some farmers even take advantage of extra space and plant right up to the shoulder of the highway. Every town boasts a distillery or two hundred, and the main streets are lined with folksy liquor stores.

We were three days into an open-ended road trip through the region. Our goal was to get off the beaten path, and enjoy  Jalisco’s famous birria, tacos de barbacoa, volcanoes, lakes, and, of course, tequila. Our first stop was Atotonilco el Alto, just east of Guadalajara on Highway 90. The town was  devoid of tourists and beautiful in a distinctly Mexican way, the market pungent and bustling, the plaza hemmed by colonial buildings painted in saturated colors: sky blue, lime green, burnt orange, violent purple. More beautiful yet was the sight of the giant signs heralding the home of one of my favorite tequilas: the estimable Siete Leguas. I felt like Charlie on his way to the chocolate factory.

Siete Leguas headquarters is not a distillery, but contains a liquor store that reminded me of the duty-free shop at the airport. The woman behind the counter was impeccably made up and seemed confused by our request for a distillery tour. We’d stupidly neglected to make an appointment.

My heart sank. We’d driven 3,000 miles to get here, and Siete Leguas had been one of my major goals for our trip to Mexico. We had to be in Guadalajara that evening for a baseball game (Charros de Jalisco v Tomateros de Culiacán), so this had been our only chance to tour the distillery. We were forlornly standing  in the shiny gift shop when an elegant older woman breezed in. She wore her black hair long and loose, and a slouchy black-and-white scarf accented her silk blouse and black capris.

“You’re here for a tour?” she asked, in very good English. I suddenly realized how scruffy we looked, but she gazed upon us with absolute warmth and courtesy.

“Is it?” she smiled with genuine delight. “I think we can work something out. In fact, I’ll give you a tour myself.” I got the impression that giving tours wasn’t really part of her job description, but she was completely gracious about the interruption.

She led us to a pick-up truck and a mustachioed driver chauffeured us to one of the company’s two distilleries. Due to our negligence with reservations, we were able to see the facility that isn’t a showcase. La Vencedora, our guide explained, is the less-traditional of the two distilleries. At the show distillery, El Centenario, they grind the agave with a traditional stone wheel pulled by mules (a tahona), while La Vencedora uses a roller mill. Tequila from both distilleries is mixed to make the final product.

For a distillery that wasn’t designed as a showcase, La Vencedora was surprisingly old school. We walked into a cavernous building filled with mountains of maguey. Jimadors hacked at the agave hearts with coa de jima (flat-bladed knives attached to wooden poles), and then tossed the piñas into nifty shoots that drop to the room-sized brick ovens, where the agave steams for days. 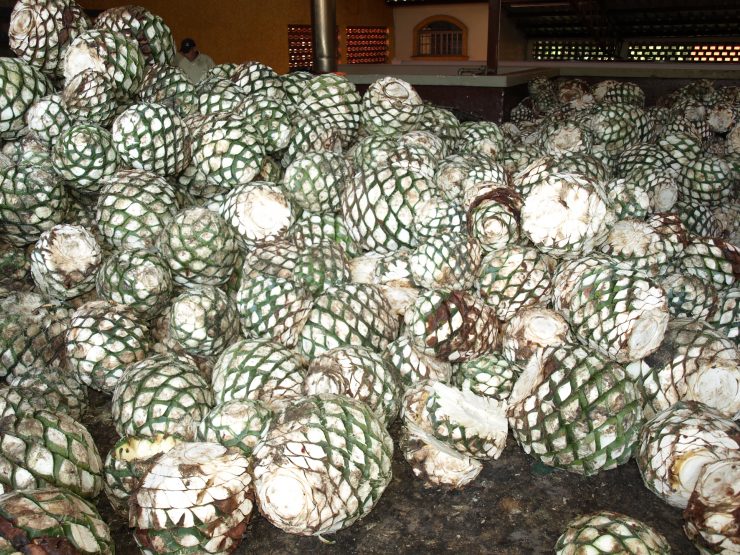 The overall impression is of a straightforward and meticulous operation. Siete Leguas isn’t cutting any corners. Instead of the speedy stainless steel autoclaves used by bigger distilleries, Siete Leguas slow cooks in brick. We sampled dark pieces of cooked maguey that reminded me of caramelized pumpkin. The distillery also practices open-vat fermentation, which  likely contributes to the flavor of the tequila.

We climbed up metal stairs to check out this step in the process: the fermentation of the baked hearts. Pond-sized vats bubbled with fibrous liquid. With delight, I breathed the sweet, yeasty air. I sniffed the spicy notes of tequila blanco emerging from the tall stills. The entire building was suffused with intoxicating smells. 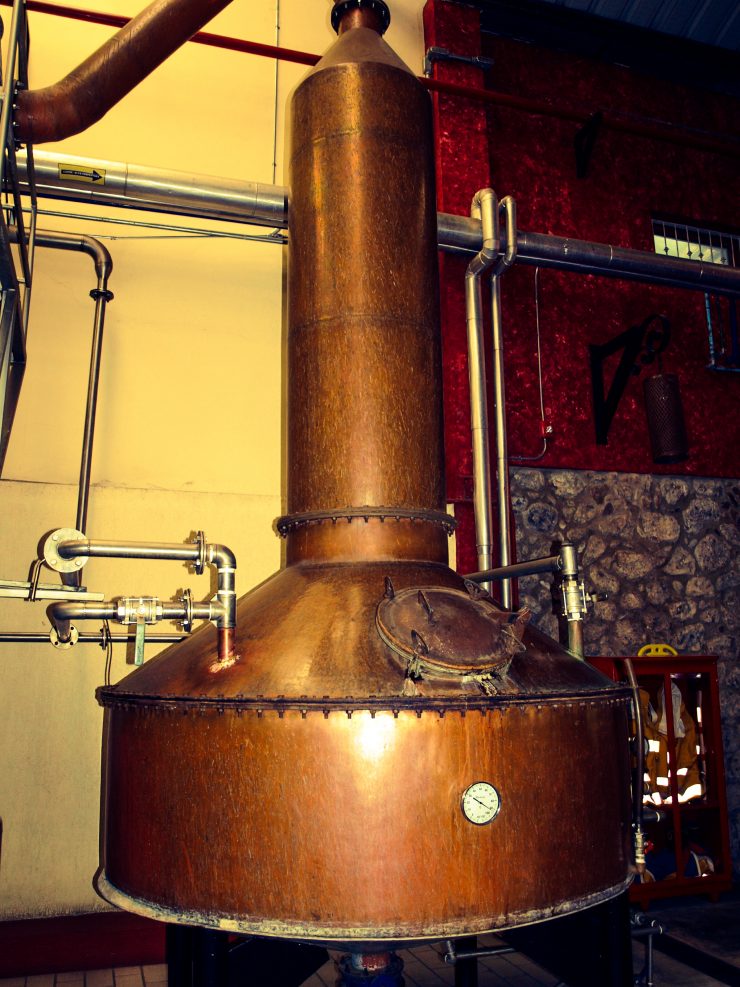 The copper stills were manned by stern-looking men in work clothes. We watched tequila pour, sparkling, into a metal vat the shape of a giant tea cup. Our gracious guide filled us snifters directly from the spout. The tequila was smooth yet complex, sweet yet spicy, mellow yet vibrant. I must have looked appropriately appreciative, because she looked pleased. “It’s her favorite tequila,” she told the distillers, who actually grinned and seemed genuinely gratified, as though they were surprised to hear that some random gringos would have ever even heard of Siete Leguas.

When we left, our guide casually handed us two bottles of Siete Leguas reposado.

“Two free bottles of some of the world’s finest tequila?” I said in wonderment as we walked back to our dusty Hyundai. “That can’t be typical. Plus, the tour was free.”

Instead of touring more distilleries, we decided to go camping and explore the countryside. We’d do wholesome things like visit ancient ruins, swim at the local water parks, and hike. Which was how we ended up getting lost on the side of a volcano in the dark with a bottle of tequila.

On our first attempt, we’d driven from our camp in Etzatlan to the town of Tequila, which sits at the base of the verdant Tequila volcano. As we drove in circles looking for the road up the mountain, we were hit by a sudden and torrential rainstorm, the kind that turns streets into rushing brown rivers in mere minutes. Visibility was terrible, and we were forced to park the car and wade to refuge: a bar on the Tequila town square, where we drank overpriced palomas and listened to the drunken flirtations of hipster gringos and rich kids from Mexico City. 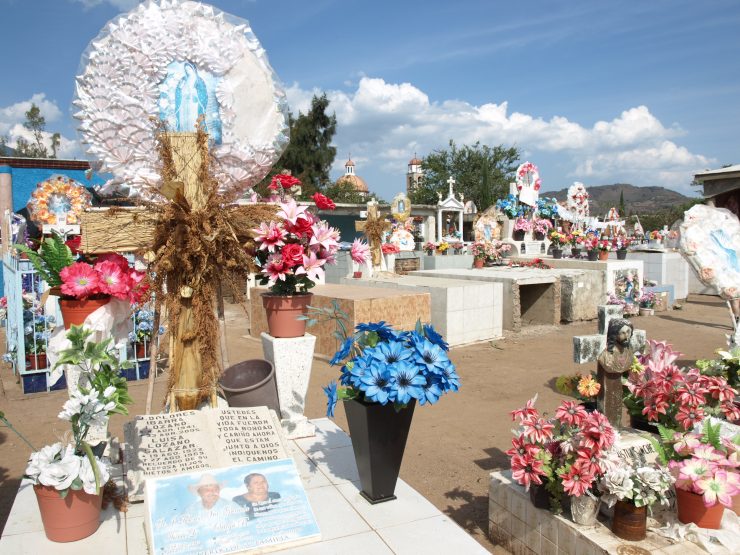 The following day we toured the ancient Guachimontones ceremonial site, sampled the local pulque, and wandered through a cemetery. In the afternoon, we headed to the volcano. It took us nearly an hour to even find the cobblestone road that ran out of  town and up the side of the  Volcán de Tequila. And then it took us an hour to drive up the  17 kilometer road, which started out bad and got worse gradually, insidiously, until I worried that our axles would snap. We traversed potholes the size of ponds and drove over rubble piles that jacked the passenger side up so far that I worried that we’d flip. But we’d persevered. Because, in addition to have romantic notions, I’m extremely stubborn.

I peered anxiously at the setting sun. “I think we can still make it,” I said. “We’re only a couple of kilometers from the top.” We rounded the corner to face an imposing gate and a number of no trespassing signs.

As we were taking this in, a gang of boys roared down on motorbikes, riding through a narrow gap in the fence. They skidded to a stop and stared at us.

Hmm…A motorcycle gang on the side of a volcano. This was the stuff of B movies. But I tried to keep things nonchalant.

“Hey, is it still possible to get up to the rim of the volcano?” I asked in passable Spanish.

He grinned. “Yeah, don’t pay any attention to the signs. It’s just a little way. You can still go up on foot. It’s not a problem!” He then issued directions in the typically Mexican rapid-fire style, and he and his buddies roared down the mountain.

The sun was sinking low, lighting up lakes like mirrors on the floor of the valley 8,000 feet below. Despite the late hour and my brand-new fashion huaraches, we squeezed past the gate and set off on foot.

“A little way,” turned out to be two or three kilometers straight up. We weren’t even in sight of the top when the sun set, but we paused to stare at the tangerine ball of fire sinking into skeins of clouds over fields so far away that they’d faded to blue. Against the bright sky, the oak and pine trees were sharp black silhouettes. We passed the bottle of Siete Leguas and contemplated the land from whence it came.

We never did see the spine of hardened lava at the center of the volcano. We got lost and we got blisters. When we finally found the car again, it was well into the night. We jolted back down the mountain and drove through the warm Jalisco night. Off the beaten path indeed.