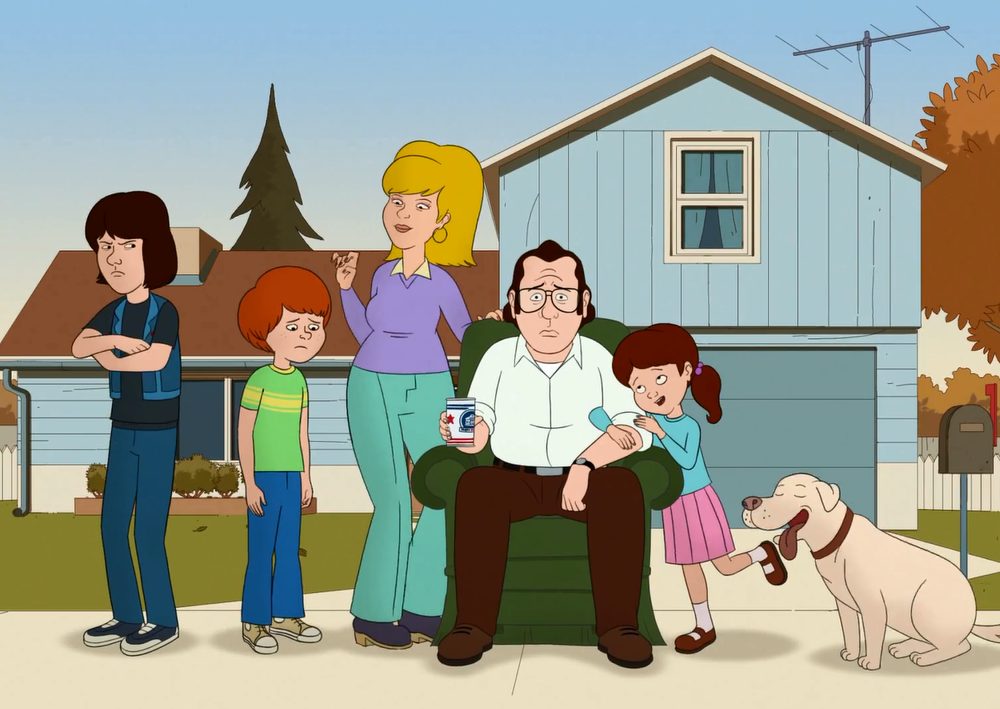 F is for Family — Season Two is a Dark, Funny Look at the 1970s Family

When we last saw the Murphy family, Frank, wearing a forced smile, was walking through the door of their suburban home on Christmas Eve 1973. His return coming not long after he single handedly averted a strike at his former employer Mohican Airlines. Former employer, as in he was fired that very day, moments after brokering a deal between the union and management.

Season two of the Netflix animated series, F is for Family, picks up three weeks after Frank’s firing, and things are not going well for the Murphys. Frank (Bill Burr) is still without a job, and to make matters worse (at least in Frank’s 1970’s macho mind), his wife Sue (Laura Dern) has become the primary breadwinner for the family via her job with plastic food storage company Plast-a-Ware.

For those that were raised during the 1970s the themes of Season 2 ring true. The days of the one income family were quickly coming to an end, but at the same time, the sexism that women faced in the workplace was still all too present and easily accepted. Inflation was on the rise, gas was being rationed and good paying jobs were becoming hard to come by.

It was a difficult period for adults, but children faced issues of their own, mainly that they were increasingly left to their own devices in the two-income family. In F is for Family, the Murphy children, Kevin (Justin Long), Bill (Haley Reinhart), and Maureen (Debi Derryberry) are doing their best to adjust to the changing world just the same as their parents are. And just like Frank and Sue, they’re having a tough go of it.

Frank struggles the most, mainly because he finds himself feeling like a failure and less than man. Throughout the season the darkness he feels in his soul is expressed in blinding negativity. He’s the man who had grand plans for his future only to find them derailed before they could ever be put in motion, and every day he’s been focused on crushing the hopes and dreams of others – mainly his family.

No one is safe from Frank’s wrath. His ego is so bruised by Sue’s small success in the workplace that he eventually admits that he has been hoping for her to fail. As for the children, Frank is hardest on teenage Kevin who just wants to be in a band and youngest Maureen, who might just be the brightest member of the family. As for Bill, well, as the middle child, he has middle child problems, mainly a lack of attention.

Even when Frank is able to get a job, it’s about as bottom rung as it can get and due to the low pay he’s forced to take every shift available to him, straining the family dynamic to it’s breaking point.

That’s really the tale of the show, how a lower-middle class family tries to work through the changes in society that folks the age of Frank and Sue never anticipated. They came from a generation where the man was the breadwinner and the woman stayed at home and raised the family.

There are a few drawbacks to Season two of this show. For one, the 10-episode season is much longer than the six-episode first season and at times this season drags, especially when ancillary characters are played for cheap laughs. Sure, coked up Vic is a funny/tragic figure, but the arc of his story seems to be written with not a whole lot of thought at some points.

What F is for Family does well is what the best comedy shows do well, it takes a bleak premise and stretches it to the point of ridiculousness to make you laugh, but it doesn’t let you forget that there’s real ugliness behind that laughter. In that way, the show is maybe a slightly lighter version of BoJack Horseman, another Netflix animated series.

That’s not to say that the show is all dark and dour. It does have its moments of light and hope, and as with many series, most of that is saved for the final episode, which will allow for an as-yet-unannounced third season of the show, something Netflix should get in the works sooner rather than later.