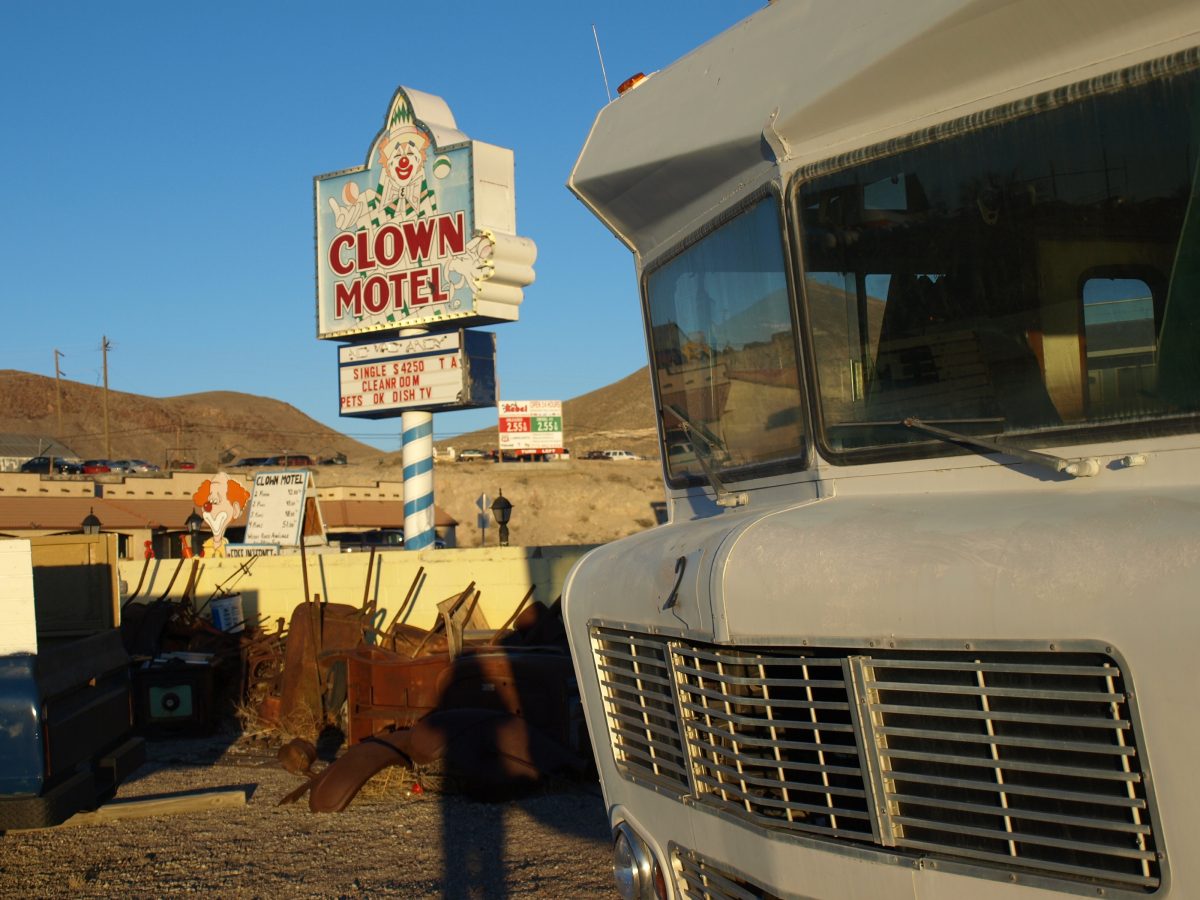 The Nevada office is full of clowns. Floor-to-ceiling, the figurines stand like soldiers in a sad, yet menacing, army. The man behind the desk has floppy grey hair and looks like a bail bondsman or private detective.  He’s talking to a biker, who seems comfortable in the clown-cluttered ambiance. “I’m looking for a room,” I say, “for two.”

“But not the evil kind of clowns,” the biker adds helpfully.

“Also, you have free access to the attached cemetery,” the clerk adds. 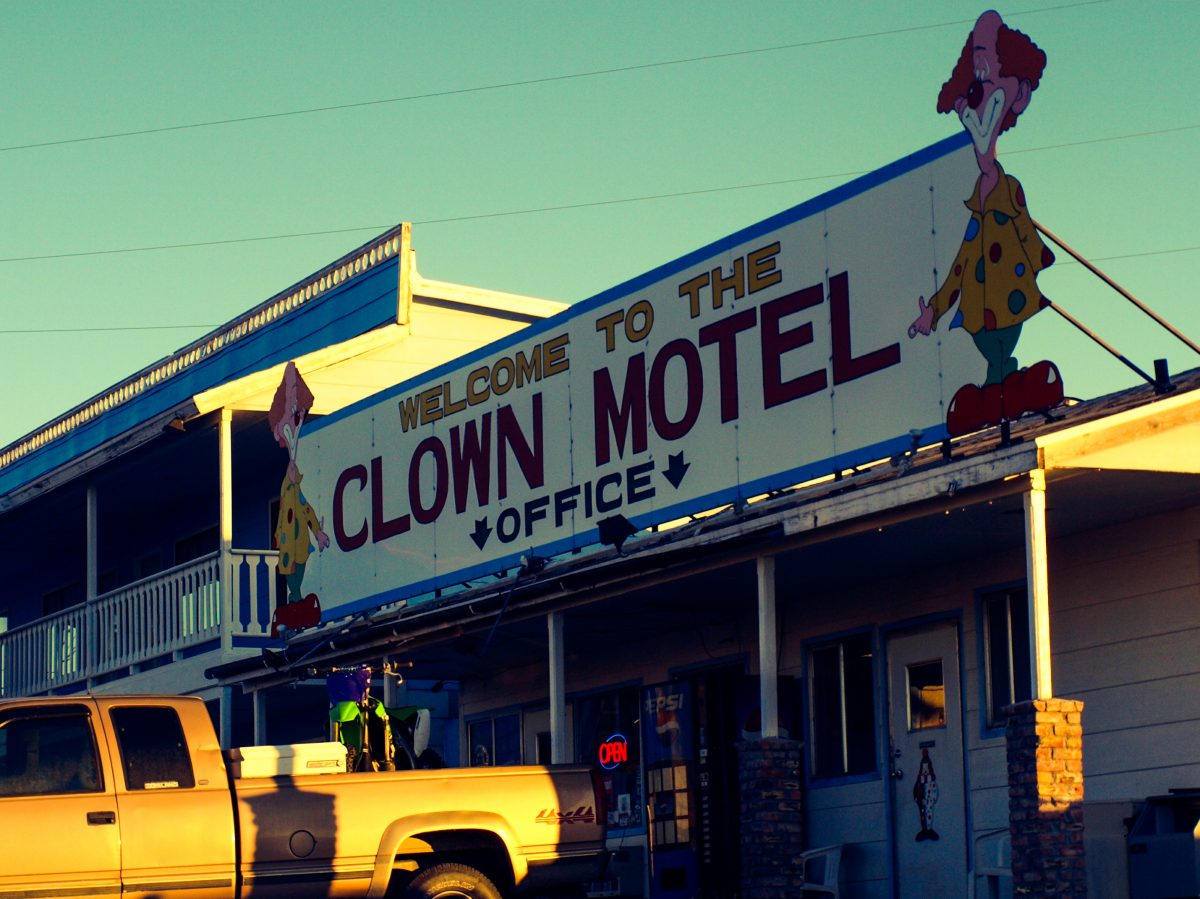 This is why I love Nevada. Like most people, I used to imagine the state as basically Vegas plus big-ass desert. But that was before I exited the interstate and discovered that the back highways of Nevada crisscross through strange little mining towns, eerily beautiful mountains, and glittering deserts dotted with trailer court brothels. In other words: this is excellent road trip territory.

If you loop out of Vegas on 160, you’ll pass through gorgeous Red Rock Canyon National Recreation area, and eventually hook up with Highway 95, which you can take to U.S. Route 50. “The loneliest road in America”  climbs through Nevada’s beautiful forested highlands and past an assortment of odd attractions. This itinerary is just a sampling of what you’ll find if you have the time and inclination to step off the beaten path and into the wilds of Nevada. 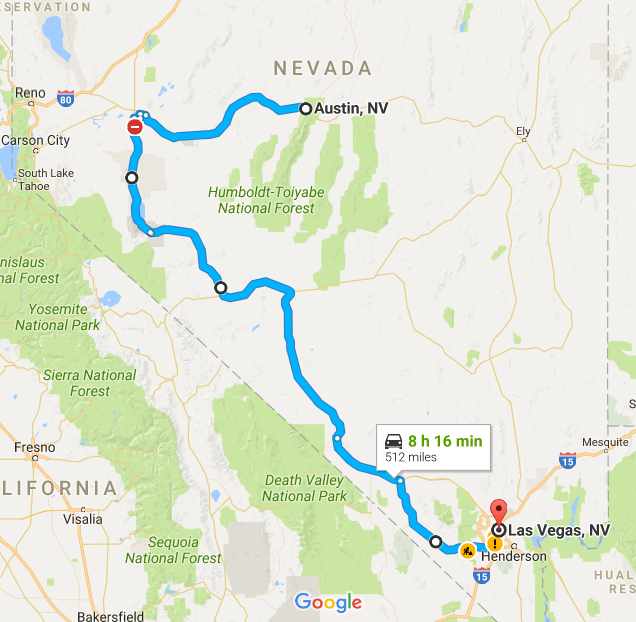 Things to check out along the way:

In the late 19th Century, Wyatt and Virgil Earp laid down the law in Goldfield, a boom town famous for its rowdy red light district. The many saloons were an asset when the town caught on fire in 1905: as legend has it, firefighters ran out of water but were able to put out the flames with barrels of beer. Though the “Queen of the Mining Camps” is now on the registry of Nevada ghost towns (and a great place to try out a ghost hunting video camera), Goldfield actually has a population of 298 and several interesting establishments, including the supposedly haunted Goldfield Hotel and the Santa Fe Saloon, which advertises “the meanest bartender in the west.” 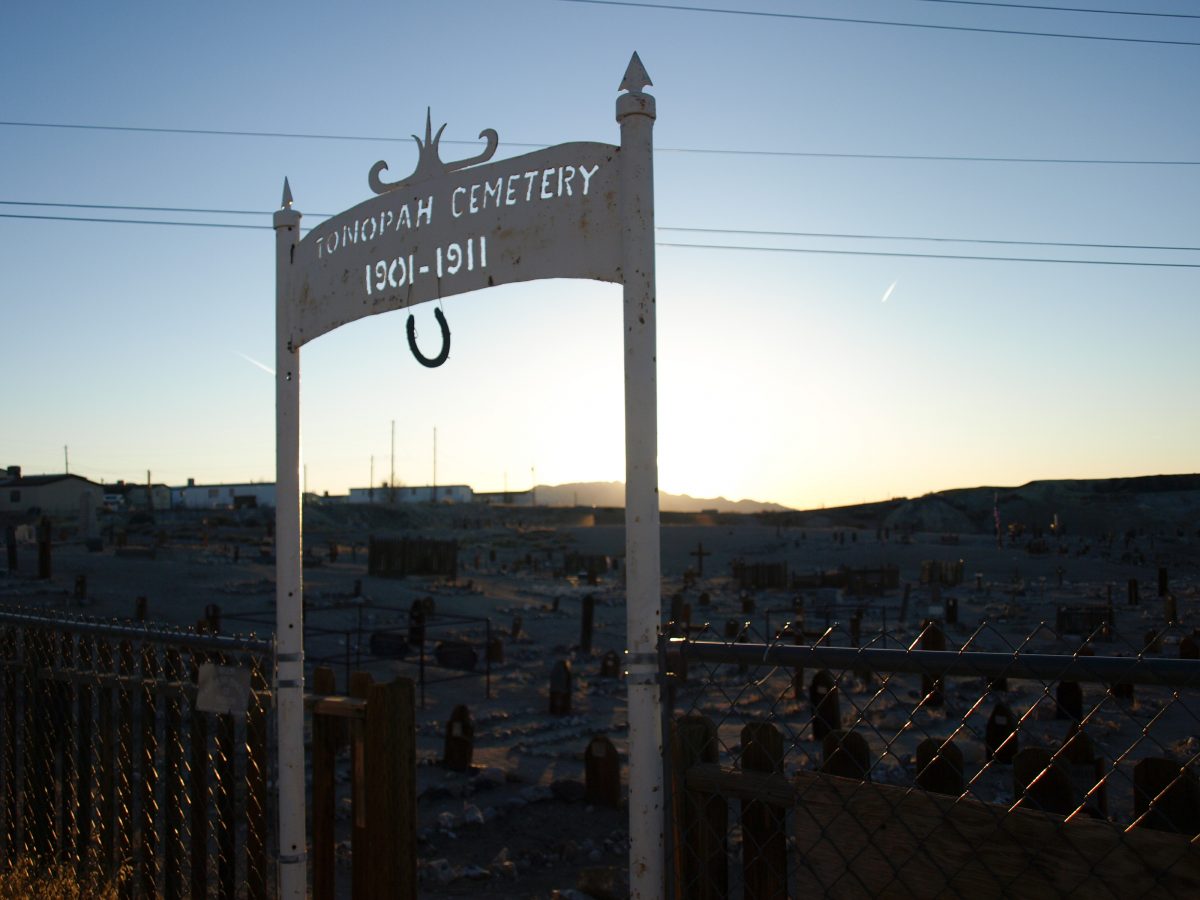 Like nearby Goldfield, Tonapah adopts a regal title: “Queen of the Silver Camps.” The town is livelier than Goldfield and home to the beautifully-restored Mizpah Hotel, which was too pricey for my travel budget. This is how I ended up staying in a Clown-themed motel with an attached cemetery.

Fortunately, I spent my 20s hanging out at a clown bar, which inured me to clown decorations. That said, the biker was lying. The painting above our bed depicts a clown opening a chest that emits glowing light and a host of snarling ghost clowns. But hey, the room is  clean and the attached cemetery turns out to be a real gem. The fenced yard contains 300 graves that date from 1901 to 1911, when the plot was maxed out by the town’s disturbingly high death rate. Most of the tombstones and crosses are marked with cause of death, ranging from “plague” to “mine disaster” to “murdered.” 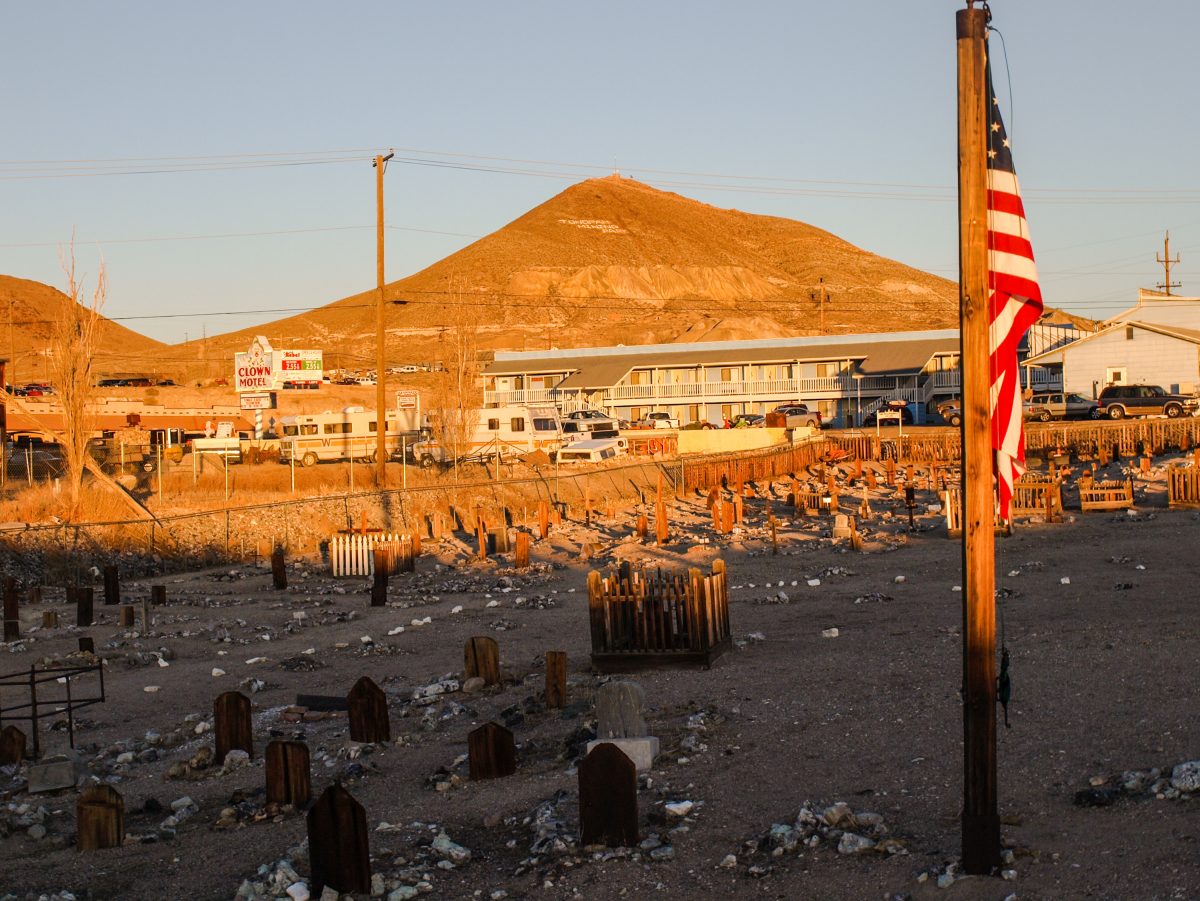 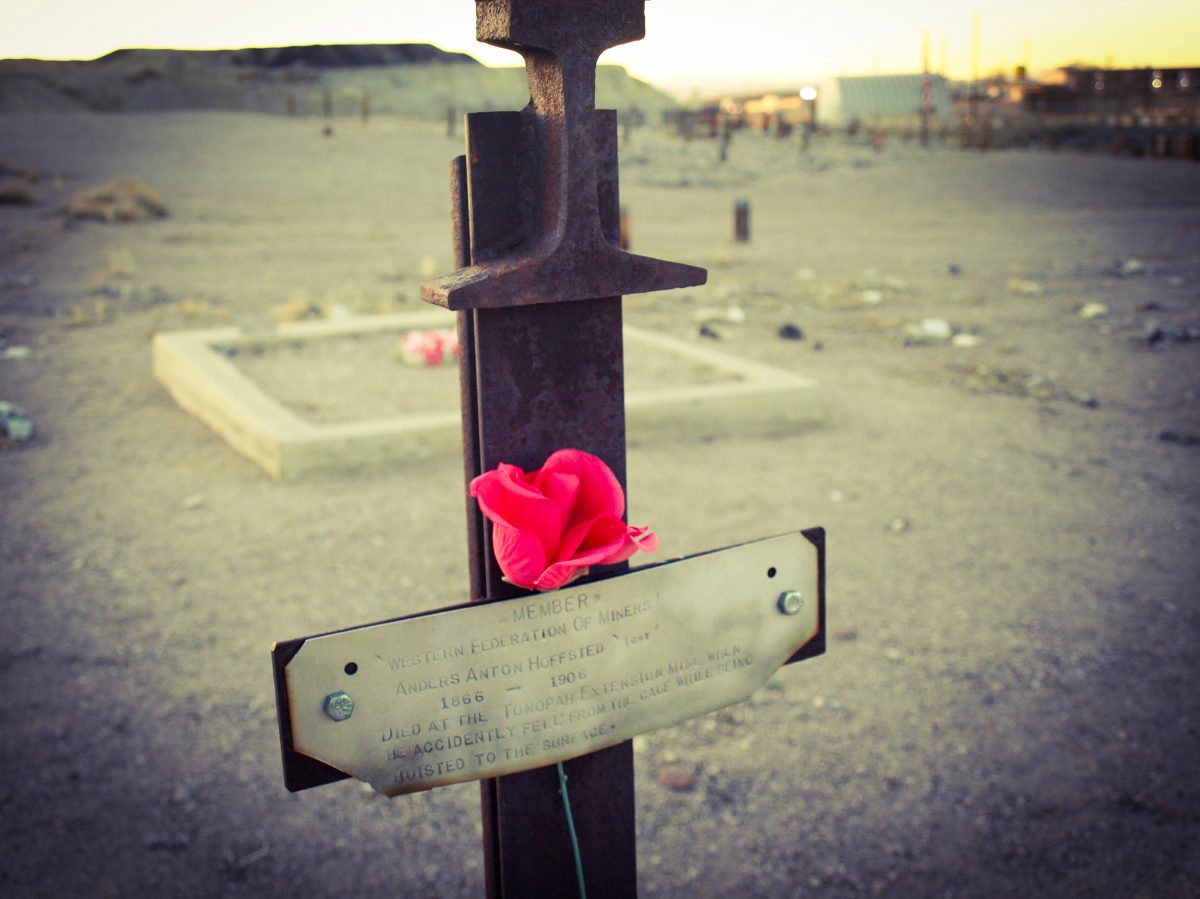 I’m not one to let my appetite be dampened by the tombs of consumptive children, so after touring the graves we headed up to the Tonopah Brewing Company, an elegant pub with a gorgeous old bar and a stamped tin ceiling. I didn’t really expect either hipster styling or exemplary local beer in middle-of-nowhere Nevada, but we were pleasantly surprised by the beer, which easily competes with the best of the west. Our enjoyment extended to the menu: the barbecue here is legit, with tangy sauces and real southern-style sides. 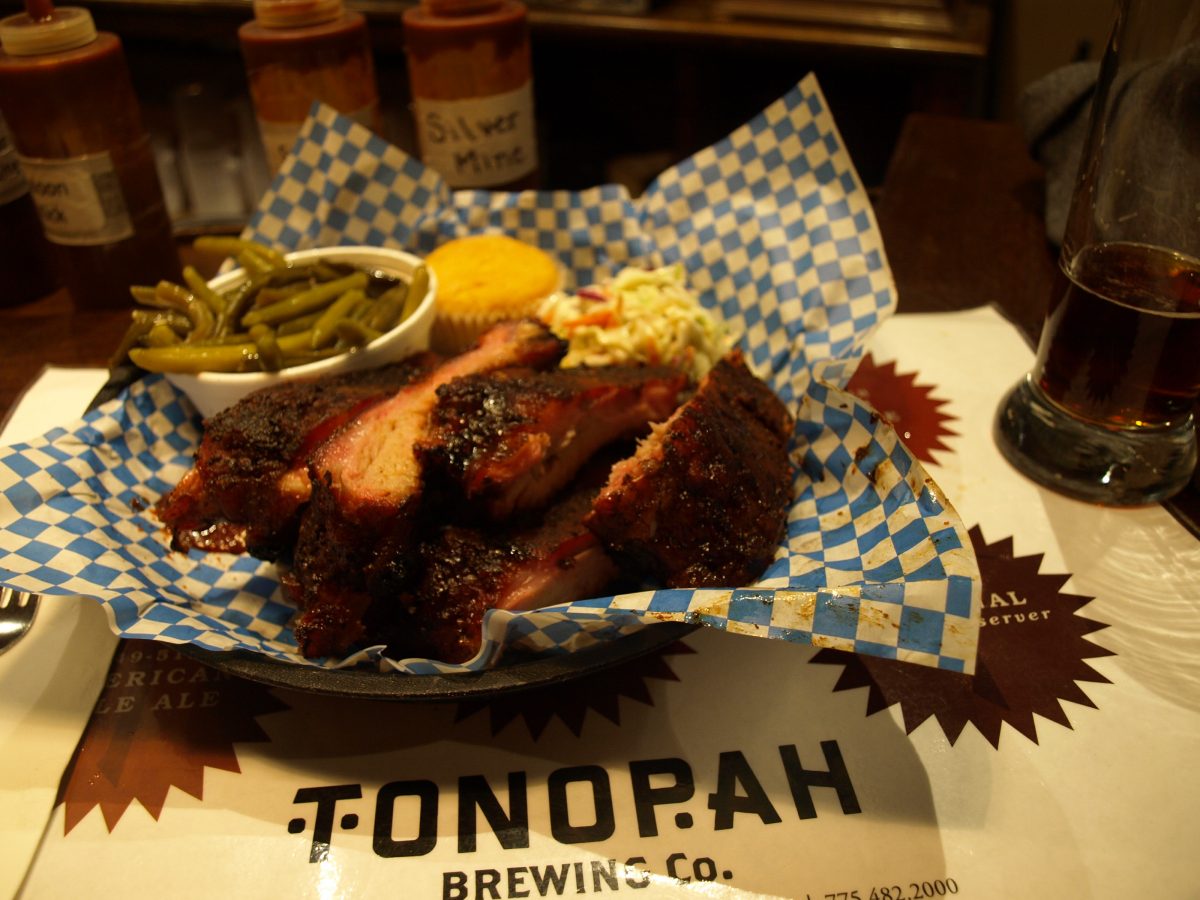 You could spend a day in the Hawthorne Ordnance Museum. The space isn’t huge, but it’s full of fascinating artifacts, from giant harpoon missiles to a M-47 Patton tank. Glass cases are crammed with World War II uniforms, rations, and the personal ephemera of the people who built and tested weapons at Hawthorne’s giant U.S. Navy Ammunition Depot, which was commissioned in 1930. The staff is friendly and knowledgeable and admission is free (though donations are, of course, appreciated). 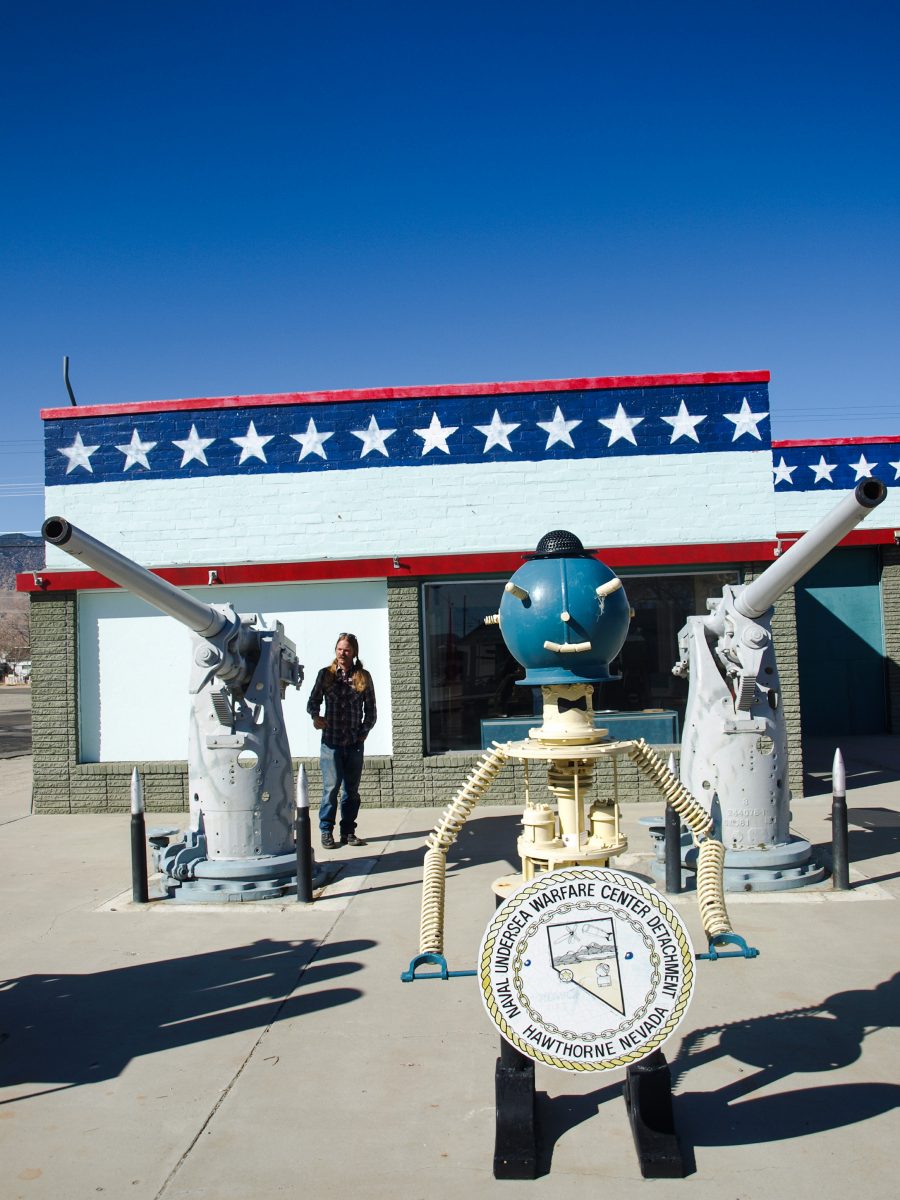 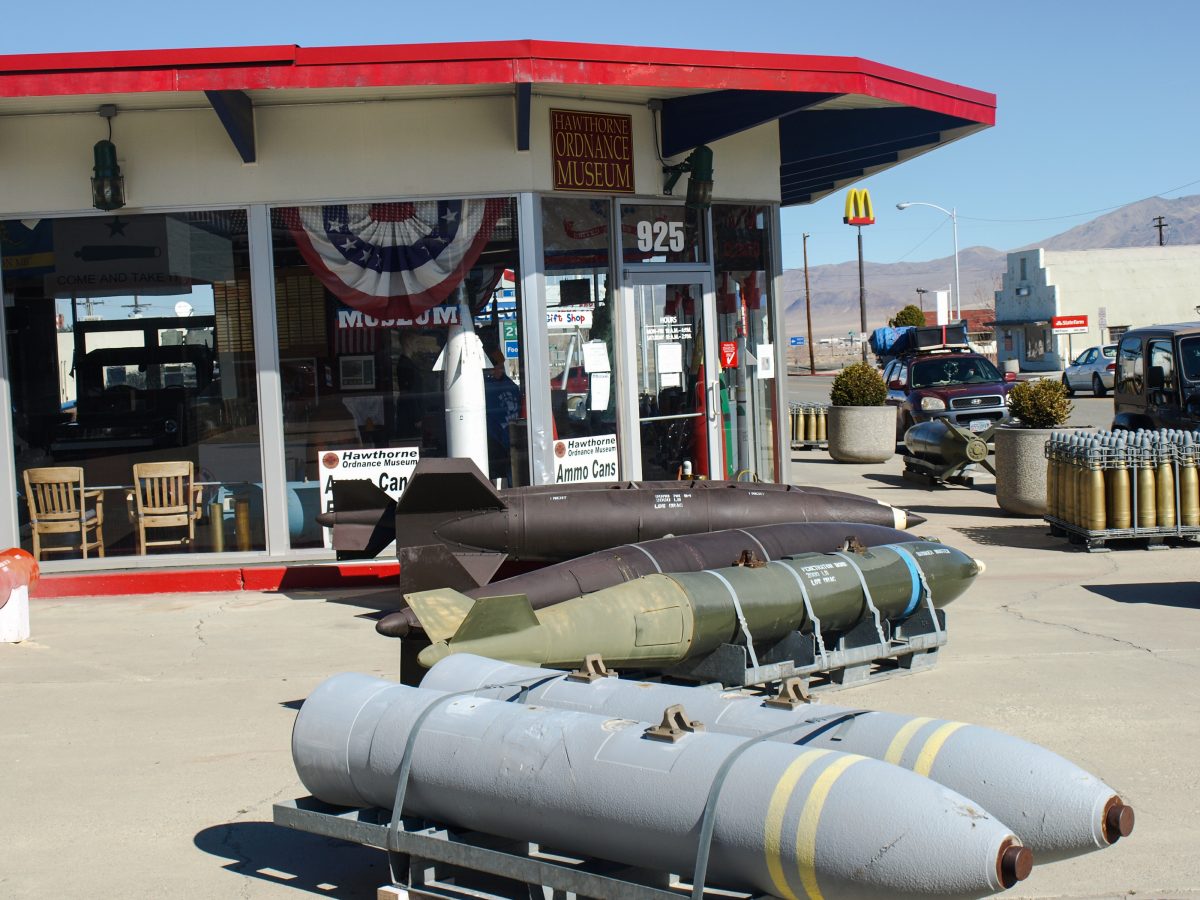 Thousands of shoes dangle from a massive cottonwood. Located on a barren stretch of highway near Middlegate, the shoe tree is a beloved local landmark. (In 2011, some asshole cut down the original Middlegate Shoe Tree. The local community was so devastated that they held a memorial for the tree and immediately set to decorating a new cottonwood, which is now impressive in its own right.)

Tiny Austin Nevada is home to a castle and three dive bars. If you’re not intrigued, then you should ignore all my recommendations because we’re obviously not at all on the same page. The first order of business: the castle. Located just west of town, Stokes castle is a three-story stone tower built in 1897 by the mine developer and railroad magnate Anson Phelps Stokes, who modeled it on a tower he saw in Italy. After checking out the Roman-style tower, continue your historic journey to The Owl Club, which looks like your grandmother’s living room, if your grandmother’s living room happened to be a very old dive bar. If you’re nice, one of the regulars might fire up the ancient jukebox, which plays 45s from the ’30s and ’40s. Just down the street is The Pub, also a quality establishment, and inexplicably owned by the same grandmother.

The Rest of the Trip

After Austin, there are several potential routes for looping back to Vegas. I haven’t made this leg of the journey yet, but I trust you’ll find a few interesting things along the way. After all, a good road trip always includes uncharted territory…