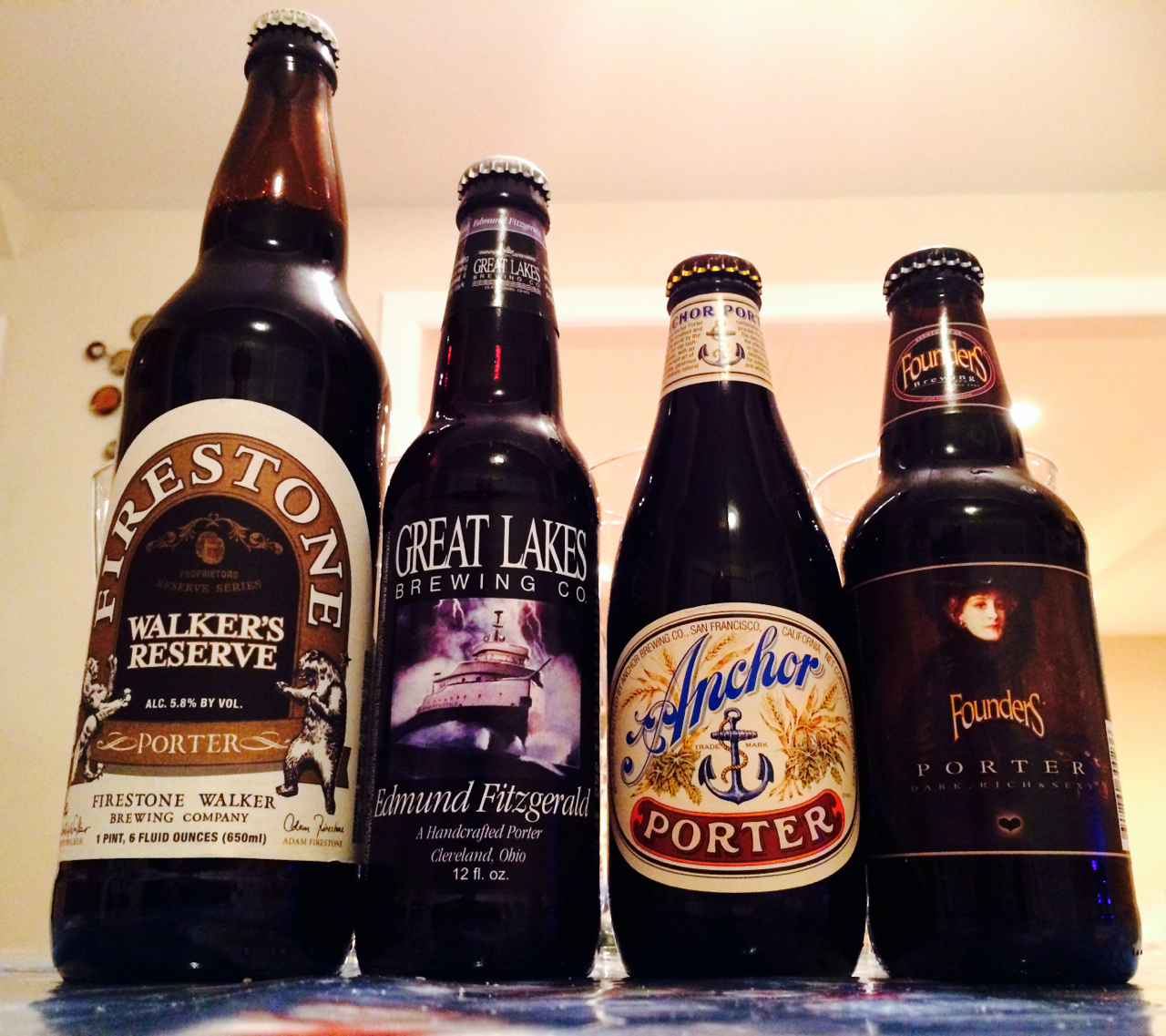 This article by Limpd was originally published on the “It’s just the booze dancing…” blog.

Minding my own business (as I’m always wont to do), I was assailed by G-LO with another of his “great” ideas for a post. He thought it might be “fun” to try a couple of different world class porters and write it up as a post. While I might agree that it could be “fun” to try the porters, it was a lot more fun to drink them and then not as much fun to write it up. I find my commentary to be rather simple next to the voluminous notes of my verbose counterpart. I find G-LO is a mix between Alistair Cooke and Julia Child and for some reason while I transcribe the notes of my Sicilian friend, I have a peculiar English accent rattling around in my head (think the Monty Python Spam sketch).

For our Porter-palooza (because everything is a little more festive if it ends in palooza!), we selected porters from Anchor, Founders, Great Lakes, and Firestone Walker. Suffice it to say, we had selected four world class porters and any attempt at rating or ranking would be a little like picking out the ugly girl in the Sports Illustrated Swimsuit Edition. For your reference, Beer Advocate, “the Bros”, and RateBeer scored the four as follows:

Clearly, there was no loser in the bunch. So, our review would be based far more on personal preference than on anything else. This is a Ginger or Mary Ann kind of question; no wrong answer, just an indication into one’s psyche (for the record, I would go for Mrs. Howell, after a suitable mourning period for the dearly departed Thurston; she had a lot of money and probably would have been grateful).

“Pours silky black with a creamy tan head. The nose is sweet with strong chocolate and caramel malt presence. No absence of hops gives Founders’ robust porter the full flavor you deserve and expect. Cozy like velvet. It’s a lover, not a fighter”

We poured the bottle out into the glass and we were left with a dense black viscous liquid with a good bit of tan foam. I noted the obvious; the heavily roasted aroma with big notes of chocolate and a lingering aroma of coffee grounds. G-LO noted that the aroma was reminiscent of an Espresso roast coffee (most likely Kopi Luwak harvested in early April and undoubtedly from the island of Sumatra) with additional notes of a deep, dark chocolate. After allowing it to warm a bit, I found the taste to be medium bodied with a good bit of sweetness (like a glass of dark chocolate milk) ending with a rich, bitter finish. G-LO found the Founders Porter to be lightly carbonated with a smooth and creamy mouthfeel and a taste like an espresso bean coated in deep, dark chocolate (probably made on the second shift on a Thursday in August by Ghirardelli). We were both very impressed with the Founders Porter and it certainly lived up to its world class designation.

A blend of specially roasted pale, caramel, chocolate, and black malts, along with our top-fermenting yeast, creates complexity without bitterness. The brew is hopped at a high rate, and naturally carbonated. The result is dark in the glass, but surprisingly light on the palate.

Anchor Porter® became the first modern American porter when it was introduced in 1972. As we celebrate its 40th anniversary, our porter continues to reward those who look beyond its intimidating appearance to discover its smooth, full-bodied drinkability. Anchor Porter® is the definitive American Porter.”

We poured the second bottle out into the glass and we were left with a thinner, dark chestnut liquid that was ruby tinged and had a light cream foam. I noted the sweet malt with a big blast of dried fruit (raisins and figs). I found that the aroma had an almost boozy quality; like a barley wine. G-LO noted aromas of hot fudge (like what one you would get at Coop’s MicroCreamery in Massachusetts), Ellis coffee, and a touch of Dalmatian fig jam. Once again, after allowing it to warm a bit, I found the taste to be a lot better than the aroma. The Anchor Porter was nowhere near as boozy as the aroma had indicated. The flavors were on the sweet side with a lot of dried fruit (cherries and raisins). G-LO found the Anchor Porter to be quite a bit mellower than the Founders. The flavors were complex and full of dried fruit and diner coffee (like what one would get from a woman named Edna every other Wednesday at the Starlight Diner) with a bit of milk chocolate. He found that the Anchor Porter gave off a bit of a Rochefort 6 vibe (and he found that to be a good thing). While the Anchor Porter was exceptional, I think we were both still overwhelmed by the Founders Porter.

“A complex, roasty porter with a bittersweet, chocolate-coffee taste and bold hop presence.”

We poured the third bottle out into the glass and we were left with a liquid a little darker than the Anchor but noticeably thinner than the Founders. Eddie Fitz was also ruby tinged with a light cream foam. I noted the obvious aroma of lightly roasted coffee. G-LO noted aromas of French roast coffee (obviously a Carte Noire), a touch of milk chocolate, and some licorice.  As with the first two porters, we gave the Eddie Fitz a little time to warm up. I found the taste to be a softer version of the Founders Porter that was leaning more toward bitter sweet chocolate than it was toward coffee grounds. G-LO found the Eddie Fitz to be somewhere between the Founders and the Anchor on the coffee spectrum. There was more of a bitter, sweet chocolate, especially in the aftertaste. And there was some licorice too (clearly farmed from a hillside in Uzbekistan). We found the Eddie Fitz to be maybe a notch above the Anchor Porter while the Founders Porter was still the best of the three.

“An artfully crafted robust Porter.  Walker’s Reserve presents with dark chocolate and rich roasted coffee aroma and a hint of oak.  Roasty full-bodied malt flavors emerge with English toffee, caramel and cacao to round out for a smooth balanced finish.  Made with beer from our Firestone Union oak barrel fermentation system and bottle-conditioned to create a truly unique brew.”

We poured the fourth and final bottle out into the glass and we were left with the most translucent of the four. I noted the sweet malt with lots of raisins and figs. I found that the Walker’s Reserve was a little closer to the Anchor Porter but without the boozy, barley wine quality. G-LO noted aromas of Chocolate and dried fruit (clearly the porters are catching up to G-LO as he is no longer prattling on like Alistair Cooke).  Finally, after warming a bit, I found the taste to be a little fizzy and a little sweet with hints of citrus and raisins and just the slightest bitterness in the finish. G-LO was getting lots of dried fruit (raisins; like a sultana picked in June on a slope in Western Turkey and then dried through the summer months) in the beginning and then found that it was not as intense on the coffee and chocolate notes until the very end where there is a touch of bitterness. (Ah, Alistair is back). We found the Walker’s Reserve to be just below the Eddie Fitz and on a par with the Anchor Porter.

I thought the Founders Porter was the best of a great group of porters. We probably should have made that the last beer as I found myself comparing the other three to it and Founders had set the bar awfully high. I found it interesting that the Founders and the Eddie Fitz were very similar and the Anchor and the Walkers’ Reserve were very similar. It was almost as if the Midwestern brewers have their idea of what a porter should be and the West Coast brewers have a slightly different idea porter.

G-LO found that while the Founders Porter was his favorite of the four, there was no denying that the other three were also very good beers. He noted that what was really interesting was just how different they all really are. Ranging from the chocolate and coffee flavors of the Founders and Great Lakes to the dark, dried fruit of the Anchor and Firestone Walker, you have decidedly different beers; yet all call themselves Porters. Different beers for different moods; you’ve got to love the range of expressions! Then, he went on about braised meats and aged cheeses, but by then I’d had enough of his prattling, and as the beer was finished, I quickly showed him the door.