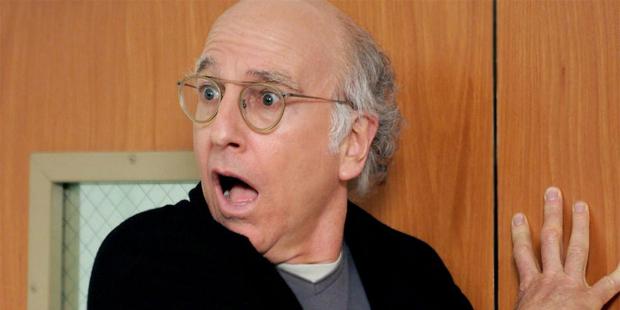 Curb Your Enthusiasm Returns for Season 9: The 10 Best Episodes So Far

The long-awaited ninth season of the HBO show, Curb Your Enthusiasm is set to begin on October 1. We don’t know much about what the 10 upcoming episodes will hold, but fans of the show aren’t going to care about that, after all, they’ve waited six years for this season.

One thing we do know is that Larry David is going to be the same Larry David he was in the previous eight seasons.

Curb debuted 17 years ago. Since that first episode, the show has picked up fans and accolades for its principal actors, Larry David, Cheryl Hines (Cheryl David), Jeff Garlin (Jeff Greene) and Susie Essman (Susie Greene). The show also sent the career of J.B. Smoove (Leon Black) into overdrive. All of the main characters and yes, Smoove, return for the upcoming season. As always there will also be cameos from other stars such as Bryan Cranston, Elizabeth Banks, Jimmy Kimmel and Lauren Graham.

Before the new season begins, take a look at the 10 best episodes from the first eight seasons.

This is an underrated episode that doesn’t get a lot of attention, but it’s a nearly perfect episode that focuses almost solely on Larry, his confidence and the crushing reality that his self-belief is misguided at best.

Larry and Cheryl are between houses and living in a hotel. Cheryl is frustrated with Larry because he seems happy to just lie in bed with his hand buried in a bag of chips while he watches trashy daytime television. She wants Larry to get back to work. In a stroke of luck, Larry and Jeff run into the owner of a car dealership while they eat lunch.

Larry, confident he can sell anything, assures the man that given the opportunity he can sell cars. The owner of the dealership takes Larry up on his offer, and much to Jeff’s chagrin, the co-creator of Seinfeld becomes a car salesman.

Larry does his best to schmooze the browsers at the Toyota dealership, but unsurprisingly he’s ill-equipped to answer any questions. His confidence slowly crumbles. When Larry does get a customer on the hook, things take a turn for the worse when Richard Lewis shows up in the showroom.

“This guy’s a disaster.”

Season 4 is built around the idea that Mel Brooks thinks Larry is perfect for the role of Max Bialystock in the Broadway play, The Producers. The subplot of the season is that Cheryl’s 10th-anniversary gift to Larry is the opportunity to have sex outside the marriage on a one-time basis. The catch is that Larry must redeem that offer before their anniversary date. This hour-long episode wraps the season up very nicely.

We also learn that Brooks had a very particular idea in mind when he cast Larry for the lead role. Larry almost makes Brooks a very happy man, but in the end, Brooks ends up crushed and disappointed.

Larry is not known for being what you would call a lucky man. In fact, he’s often the exact opposite of lucky. So, when he sits courtside at the Laker’s game and accidentally trips Shaq as the big center makes his way onto the court during the season opener, it’s no surprise. It’s also no surprise that Larry quickly becomes the most hated man in Los Angeles after his faux pas runs on the nightly news.

Most people would consider becoming a pariah bad luck, but not Larry. He’s happy with his status. He sees it as freeing, a break, a stroke of good luck. Not long after he delivers a box of Seinfeld videotapes to Shaq in the hospital, the black cloud drifts back over Larry’s head.

“This is what you get for doing good deeds.”

Over the course of its eight-season run, Curb Your Enthusiasm has gotten better and better at closing the season on a high note. Season 5 is no exception.

Larry’s quest to find out if he’s adopted comes to an end early in this episode. The discovery changes everything about Larry, and I mean everything.  He even decides he’s going to donate his kidney to his longtime friend Richard Lewis even when Lewis refuses to let Larry borrow his putter, something that would have sent the “old” Larry into a fit.

As with most positive things in Larry’s life, the good feelings come to an abrupt halt right before Larry gets wheeled into the operating room.

The operation leaves Larry on his deathbed, hence the title of this episode. It’s not a shock when Larry flatlines with his friends and family around him. What is a surprise is how and why Larry comes back to life.

“It was a horseshit throw.”

There are a handful of episodes where the writers take an infamous incident from the past and turn it on its head. They do that with Michael Richards in “The Table Read.” In the “Mister Softee” episode they do the same thing with former Red Sox player Bill Buckner, who took the blame for losing the 1986 World Series with a flubbed catch on a ground ball hit by Mookie Wilson of the Mets.

Susie enlists Larry to obtain Wilson’s autograph Jeff’s birthday gift. While getting that autograph, Larry strikes up a conversation with Buckner about how he dealt with the vitriol he received after his error. Buckner’s acting isn’t great, but he plays his role well enough, especially when he flubs a catch when Larry tosses the autographed ball to him, and in the redemption scene later in the episode.

This episode gets bonus points for the over the top performance of Robert Smigel as the captain and sponsor of the softball team.

“I don’t want to do a double goodbye!”

After the awkward good-bye, Larry has to go back for something he forgot. Larry is reluctant to return because he wants to avoid the dreaded “double goodbye.”

“What did you just fix your mouth to say?”

Larry gets in trouble right away when a hug with Auntie Rae goes past his five-second rule when it comes to physical contact. Larry’s problems don’t end there with Auntie Rae and the Black family.

Larry meets a Dr. In the cafeteria of the hospital where Jeff is going to get an operation for his snoring. During a lunch date with Dr. Flomm, Larry tells her about a conversation he overheard in the bathroom where a man on his cell phone used a racial epithet. Larry utters the slur right when an African-American surgeon passes by their table. The doctor rants at Larry upon hearing that word, never giving Larry a chance to explain why he said it. Without being able to explain why he uttered the slur, Larry’s life gets more complicated with each scene.

“You know what you are? You’re a social assassin.”

Larry and Jeff check out a Palestinian Chicken joint that has the best chicken in town. The problem is, judging by the posters decorating the walls, the owners of the restaurant are not big fans of Jewish folks. Larry is a fan of both the food and a woman who works there. Torn between his Jewish heritage and the sex he’s having with the Palestinian woman, Larry finds it difficult to pick a side, causing a big to-do at the end of the episode.

The subplot of this episode is overshadowed by the political plot, but this is the episode where Larry is recruited to tell his friend’s wife that she needs to stop saying LOL and by Sammy to tell Susie to stop smacking her lips after she takes a drink. This “skill” leads Jeff to label Larry a “social assassin,” something that Larry seems to take as a compliment.

“This is a typo. That’s aunt, that should be aunt!”

Cheryl’s family is in town for the funeral of her aunt. Things go awry from the first scene when a pair of well-wishers offer their condolences to Larry to which he replies, “Oh, you know what, it was Cheryl’s aunt.” From there he advises the boyfriend of Cheryl’s sister Becky (Kaitlin Olson) on how soon he can break up with her after the funeral.

At the funeral, Larry volunteers to write the obituary with the help of Jeff, who knows someone who can get the obituary in the newspaper. Meanwhile, Larry’s chore of getting a gift for Jeff’s mother turns into a fiasco.

When the obituary runs in the paper, a one letter typo sets off a series of unfortunate events that leaves Larry without a place to sleep for the night.

“If only there were a horrible name that I could call you that would make you as angry as I am.”

The seventh season of the show was all about a Seinfeld reunion. Something that Larry agrees to in the hope that he can get Cheryl back by casting her in the role of George’s ex-wife. On this episode, viewers get a behind the scenes look at the making of Seinfeld as the cast perform a table read as well as rehearse for the reunion show. While that part of the show is entertaining for fans of Curb and Seinfeld, the episode still manages to move the season towards its concluding episode.

The highlight of this episode is Leon impersonating a dead Jewish man I the hopes of tricking Michael Richards. When Richards finds out that Leon is a fraud he confronts Leon in full view of the people on the set. The scene, which is set up brilliantly, references Richards’ racist real-life tirade at a comedy club.