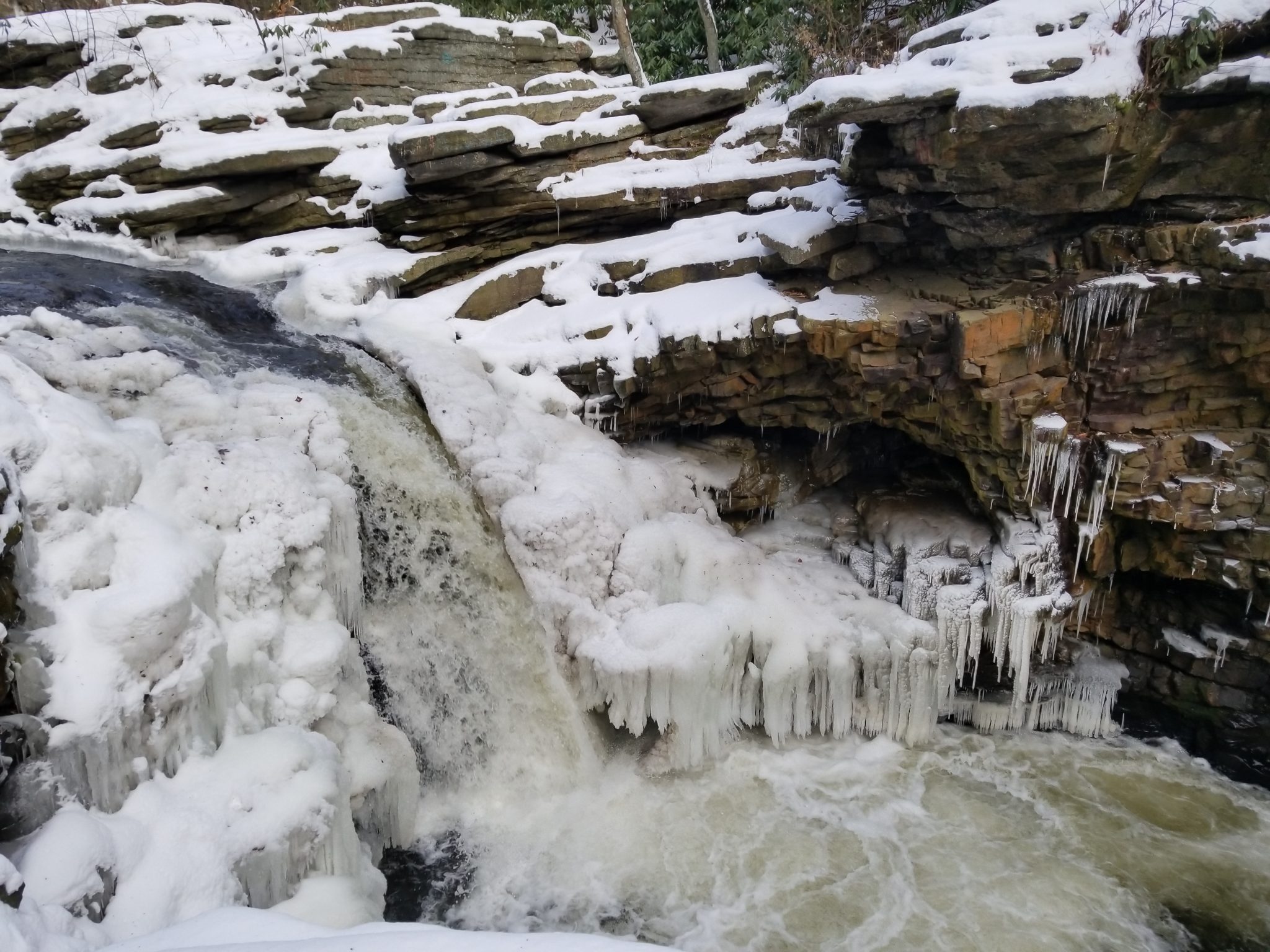 Winter Hiking: Stupid Is As Stupid Does

It was a balmy winter day in Philadelphia when I decided I’d had enough of balmy winter days. I threw on an extra flannel, packed my water bottle and camera, and headed out the door. I knew exactly where I wanted to be hiking, so I hopped in the car for a two-hour drive to reach my old stomping grounds in Northeastern Pennsylvania. The Appalachian hills and ridges look their best with a coat of ice and thick blanket of snow. The rock-strewn trails and root-ridden walkways are ideal for winter hiking. Even the very short-distance winter hikes are worthwhile, like seeing the waterfall at Nay Aug Park in its frozen glory.

In the summer it’s more of a walk than a hike to reach the waterfall, but it the winter it’s a different beast. The trails to reach the waterfall are lightly traveled in the winter leaving thick snow to stomp through. In the last decade or so Nay Aug’s popularity has grown, prompting the city to install wooden steps descending to the trail. In the winter the snow compacts and freezes and turns the steps into a slide. No joke; I sat my ass to the snow and slid my way down to the landing. After giggling like an idiot, I hiked onward and turned the corner and saw that the trail was a solid slick of ice.

This is where I start to get stupid.

Most clear-thinking folk’ll get a glimpse of the falls from afar, maybe zoom in with their camera. They’ll decide they like their teeth in their mouth and not wedged into the ice before turning around. Maybe they’ll hit the stair slide again, that was fun. But for me? Nah, I love winter hiking because of the nuggets of solid-gold storytelling it provides. So, naturally, I hold onto the frozen railing and shimmy myself downwards. It’s not so bad getting down, but I pass a few fellow adventurers who are attempting to ascend the 45-degree, iced-over trail. Their faces are red from the effort and their faces grim lines of determination.

One guy is throwing snow onto the ice to add traction. His companion is on her hands and knees and scrambling for purchase on the solid ice. We reach a point where we’re near each other.

The guy turns and shakes his head, grins, “It’s a blast.” His response is honest and good-natured.

His companion says, “Mark this is stupid!” while she makes her way up the trail.

He looks at her and then to me and says, “I know, that’s why we came.”

“Right on,” I reply and continue my own stupid descent down the icy trail.

The trail down has a railing on one side but it’s almost useless. Its main purpose is to serve as a fenced barrier preventing people from falling into the water below and is vital for safety when winter hiking. I reach a point where my feet aren’t splaying sideways on the ice and take a few pictures of the waterfall and decide that, hey, I’m not the brightest bulb in the box. Let’s get closer.

I slide under the fence and scrabble on the ice again, this time without a safety barrier protecting me from the dangerously cold and icy water. The footing is surer, maybe because there’s been less foot traffic here. A few minutes of cautious climbing later and I reach the end of the line. The roar of the water that cannot, nay, will not be contained by the ice is cacophonous. Absolutely worth the hike. But then I turn around…

… and underneath the landing, where the fence stops most visitors, there is a stunning assortment of icy stalactites. Gorgeous blue tones from the ice hang like a beard from the stones, strongly distinct from the packed ice of the waterway below. It’s exceptional, one of the best views I’ve ever seen in the park. A group of friends made the dangerous trek as well; guess they had an itching for some winter hiking too.

When I’ve had my fill I start the return trip and find myself slipping with every step I take up the trail. At times I crawl and at times I scramble over boulders free of ice but caked in snow. I think to what the first pair of hikers I met had to say about the hike, that it was stupid, but it was why they went.

I find a bit of beauty in that. It’s easy to get sucked into a path of least resistance where we become automatons and no longer need to think, to react, to face fear and danger. The security and comfortable living this lifestyle provides is… well, I think it’s great. Having a safe home with good clothing on your back and the ability to feed yourself, buy toys, go on vacations, and help folks out is fantastic. But it’s missing something, too.

It’s the fear of the unknown and the casual acceptance of danger that goes with it. Get out there and do something stupid once in a while. See what’s on the other side, accumulate a bit of perspective on your life and your situation. These willing investments in risk can only pay off if you jump into them in the first place.

I’m not encouraging people to risk their lives by hiking in dangerous conditions; that’s my gig, and it’s not for everybody. I do these things so I can get a good story, maybe earn a little insight into my life that I can extend to other folks.

So do me a favor here. Take the lesson from my winter hiking adventure with a grain of salt, but get your ass out there and be a little stupid. Challenge yourself, try a risky investment, and step beyond the metaphorical fence-line where only the brave (or the foolhardy) tread.

You’ll find good company, might learn a thing or two, but at the very least you’ll have a story to tell.