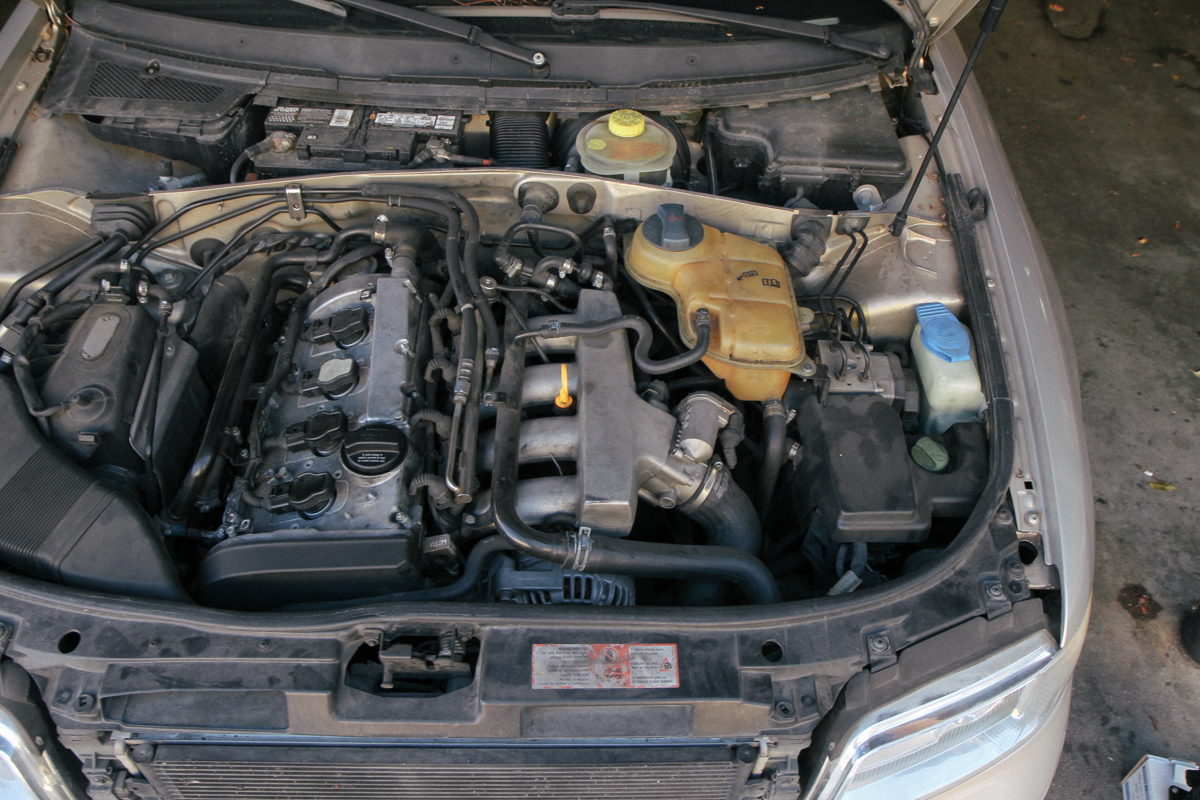 Welcome to “Will It Flip!?”. A series where I fix take a shitty car from Craigslist and take you on a journey to see if I can trade up or make a profit.

In memory of driving a smoking car home, I can recall that the white smoke seeping out the hood was from the back of the bonnet closest to the firewall the day I drove it home. If you look back at the last photo from Part I, there was a coolant leak that streamed from somewhere behind the front wheels. After a few days of digging around the interwebs trying to figure out why I have a coolant leak, it seemed that this is a common occurrence in all Audi’s. I spent an evening taking off the engine covers and inspecting the leak and all the symptoms point to the rear coolant flange. Interestingly enough, this flange is isn’t visible at glance and is located in the back of the engine block. You see that red arrow? Well it’s under that rubber hose and a bunch of other shit right before the first firewall just for your inconvenience. Yes, I said that right, first firewall. This car has two firewalls because German engineering or something. 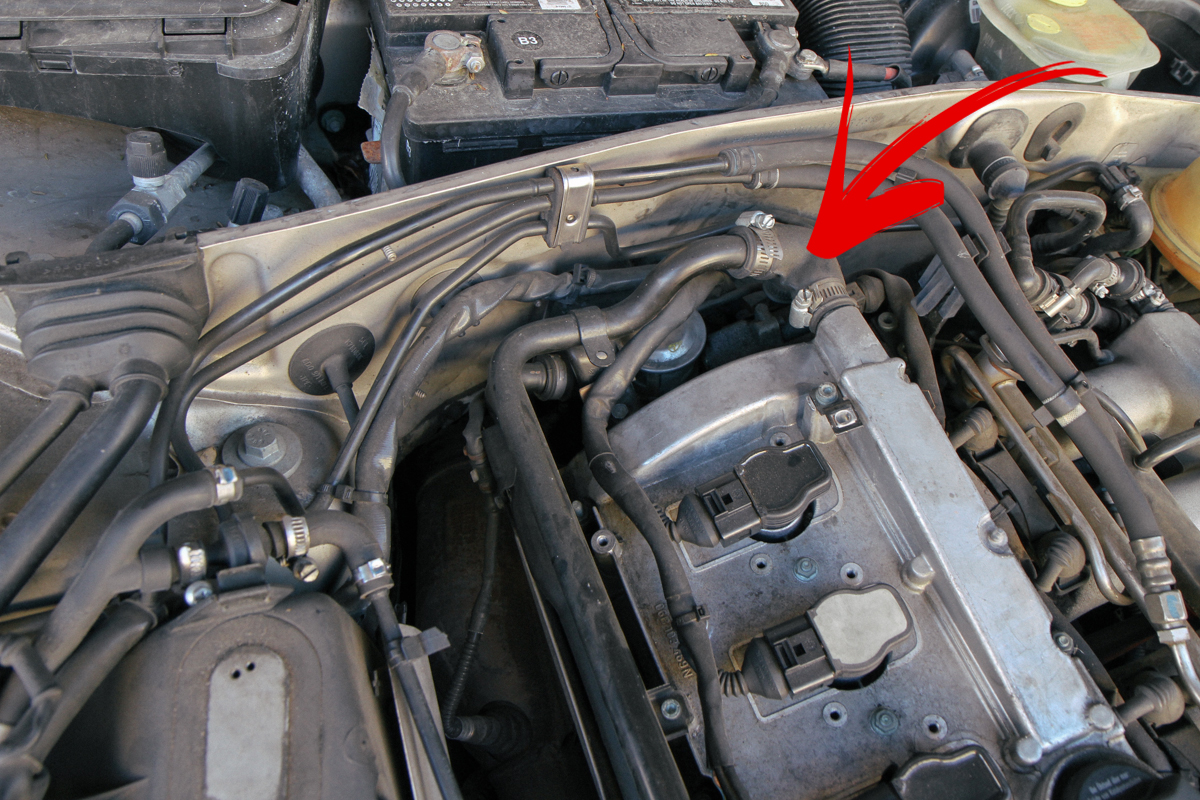 Feeling confident I went ahead and purchased the necessary parts along with some of the items the previous owner’s mechanic recommended. Being that I didn’t want to spend too much money on repairs, I made sure to calculate my spending and keep it under $300 if possible. So off to the parts store I went. I purchased the rear coolant flange, mass airflow sensor, coolant, and spark plugs, at just shy of $220. As I was walking away from the store I remembered that the hood strut had a tendency to fail. My cheap ass was contemplating if I really wanted to spend another $30 on a hood strut, but I recalled working on a car in the past with a pole jammed into the fender supporting the hood was not a good idea. I shelled out the extra cash to prevent decapitation and a potentially expensive medical bill. This was probably the smartest idea I’ve had in the past few weeks. 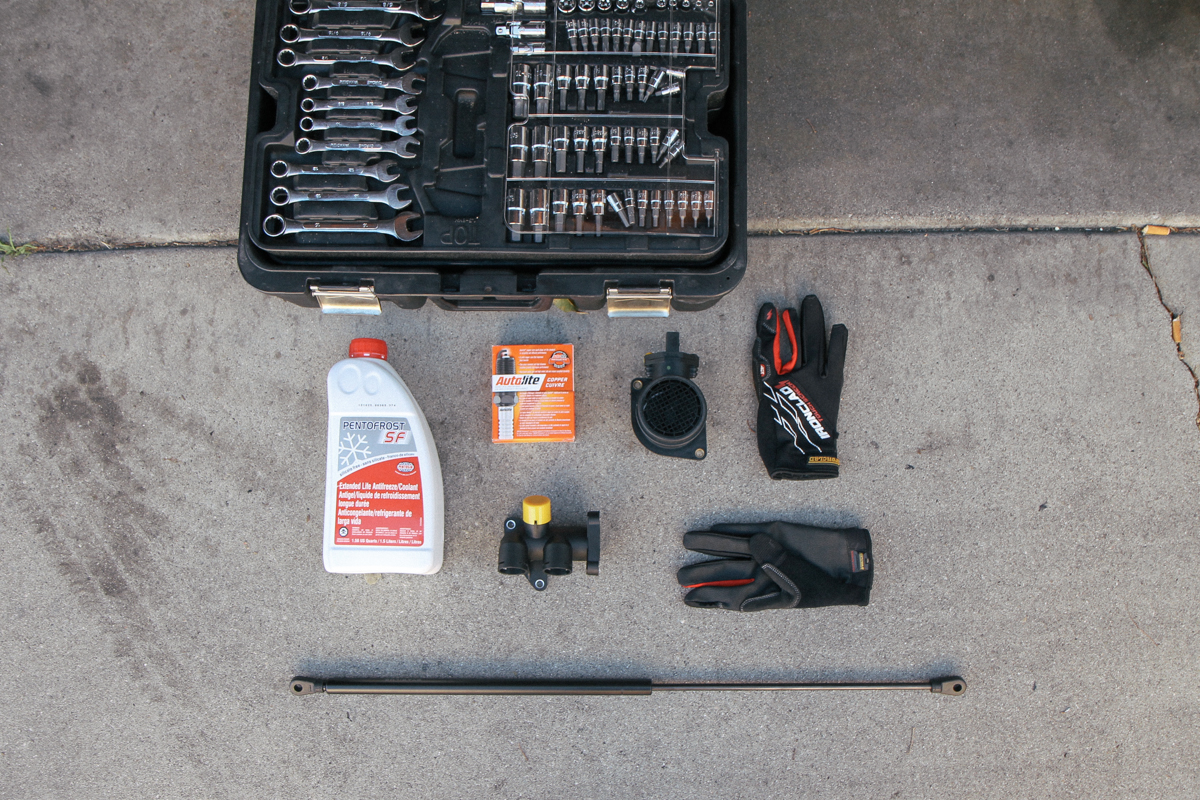 Following with more smart ideas, when working on a car usually you want to get easy stuff out of the way first. So with the hood strut replaced I went to town on the engine starting with the mass airflow sensor (MAF) which is located somewhere in the intake box away from the major work I needed to do. Within a few minutes into working, it dawned on me why it cost so much to service these cars. Changing the MAF sensor on a Japanese car usually takes about 10 minutes with just a few screws to remove. This car took about 30 minutes. It he time to get to the part that needs replacing far exceeds the time to actually replace the part, it’s mechanical surgery at best. 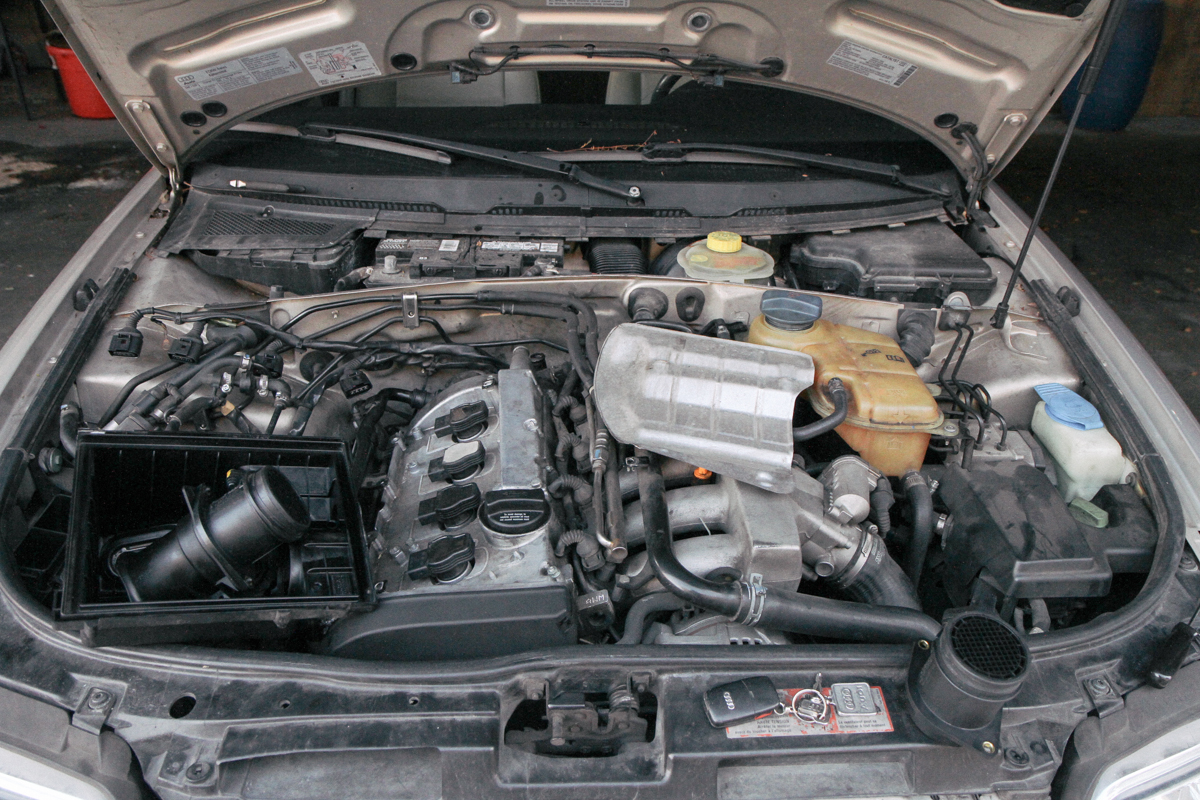 With the mass airflow sensor replaced, I noticed that the area surrounding the valve cover was abnormally dirty and quite possibly looked like it needed a new gasket. My grease monkey senses told me to replace that as well, and good thing I did. Once removed, the old gasket looked like it was probably never changed and was crustier than a teenage boy’s sock. When replacing a valve cover gasket you’ll want to make sure that the back of the cover and the parts where the gasket lay is properly cleaned and degreased before you reinstall. This will prevent any possible leakage upon replacing. Also if you plan on tackling this job yourself, I’d like to point out that once replaced and you start the car, it is normal for smoke to rise from cover due to the excess oil drips in the surrounding area.

Now we come to the dreaded job to find this coolant leak. After removing about a thousand hoses and bolts to get to the back of the engine block including the coolant reservoir tank, I was greeted with a wet and faulty coolant flange. With the flange removed, I saw clearly that the bottom part of the plastic bracket that is responsible for holding the exit hose rightly tightly in place had a big crack in it. I’m pretty sure that has to be the problem. But before installing the new one a new problem arose. The new coolant flange had two holes whereas the stock one that only had one.

This is because all of the new aftermarket flanges that you buy from Autozone or Oreilly’s were created with the intent to also work for newer model Audi’s and VW’s. My patience was tested as I read online and found out that I would need to buy a dummy plug. I decided to just go straight to the VW dealer since it seemed like such a specific part and I didn’t want order online and wait a couple days. Little did I know that stupid fucking dummy plug cost me a whopping $27. It ain’t called a stealership for no reason. By this time I just wanted to get back to wrenching before the sun goes down and I didn’t feel like MacGyverering a makeshift plug because doing a job twice on anything, especially a car, sucks. If you can afford to do it right the first time around, do it. 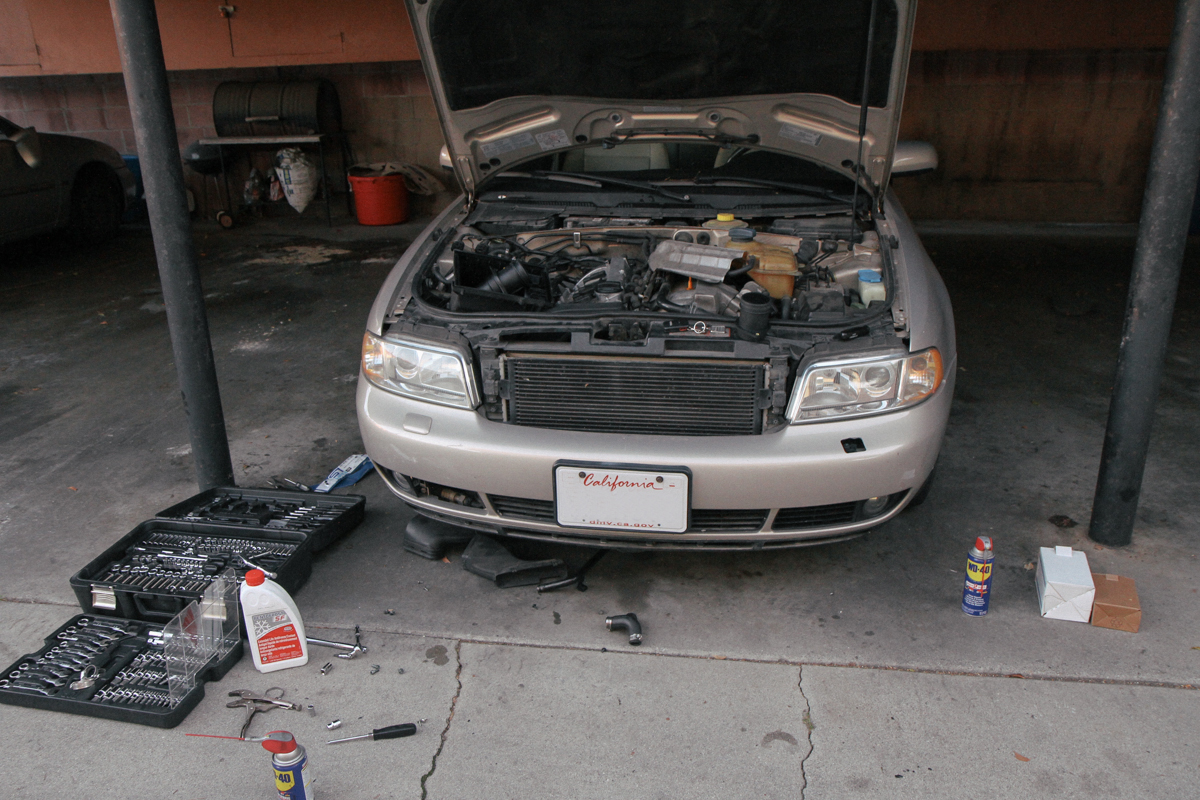 Feeling good about this coolant flange swap, I plugged up the flange and started screwing the first two bolts connecting the rear coolant flange to the engine block. Except that after about 3 minutes of wrenching the top bolt kept on spinning. Something wasn’t right. I removed the bolt and saw tiny shreds of metal on it. The fucking screw stripped the hole in the engine block at the worst possible location. How did I manage to do this? I was wrenching hard to reach places with my gloves and must have miscalculated the angle of the bolt. Lesson learned, don’t ever wrench tiny bolts with gloves on again. The sun was setting and I was beyond pissed. As I aggressively unscrewed everything to pack up, the other bolt that was supposed to hold the flange dropped somewhere down the engine bay and never met the floor. Feeling defeated with a lost bolt and stripped engine block, I just left it at that and called it a day. So much for this car being ready to go in less than a week.