The sun-baked asphalt acts like a convection oven doubling the heat from the sun, and what passes for a breeze feels more like somebody opened the door to a blast furnace. Grown men scurry into the safe confines of air-conditioned big-box stores and women guide their children from the scorching sun in a mad dash towards SUVs to escape the merciless heat.

It’s a June day in Phoenix and I am standing in an asphalt parking lot, so that description isn’t all hyperbole. I imagine those people who are fleeing the heat watching me with a concerned glare for my sanity; here’s a stationary figure standing on blacktop, staring upwards at the sun through funny-looking glasses… and smiling.

In 2012, the Transit of Venus took place. The event is spectacular. Venus passes between earth and the sun, evidenced by a tiny black dot that slowly moves across the sun. 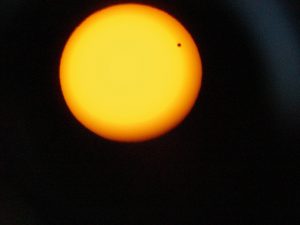 While standing in that oppressively hot parking lot I was struck with a thought of tremendous weight. I was looking at another freaking planet nearly the size of earth, twenty-six million miles away, and beyond even that was the massive sun, dwarfing the tiny black dot I could barely interpret as a planet.

The event holds singular importance in my life. It is an occasion marked as the day I truly imagined the overwhelming scale of our solar system and galaxy itself. My perspective changed from “mega” to “mini” as I conversely compared my massive size to that of a tiny ant. I was at once tremendous and utterly insignificant. I use this powerful memory as stored-up emotional power to celebrate my losses and then temper my victories.

It was a moment of true wonderment and magic. It made me think of ancient men who witnessed a solar eclipse. It’s a dramatic event to the people of the modern day. It might have been an event of colossal importance to our ancestors.

It’s difficult to imagine the shock and fantastic thoughts that went through the heads of people witnessing solar eclipses before the widespread knowledge of astronomy. This line of thought flirts with topics of myth and magic, creation stories and legendary figures, and these tangents tug on threads of our shared tapestry.

It’s something we all share, whatever name you want to give it: wonderment, curiosity, faith, imagination, and idealism all apply. At the core it is the ability to separate yourself from the mundanity of modern living and to really believe. Just like that kid from The Incredibles, we’re all waiting for something amazing.

What are you waiting for, kid?

On Monday, August 21st, all of the United States will see a solar eclipse. While much of the country will see the eclipse reach totality, or the moment when the disc of the moon completely covers the disc of the sun, we’ll all be able to see some of the solar event. Check out the website Vox to learn exactly when the eclipse will peak from your viewing area.

It’s a perfect opportunity to share the moment with friends and family. For some people it’s an excuse to make a day trip and drive a few hundred miles to see the eclipse reach totality.

Make sure you grab a pair of solar viewing glasses or goggles designed to view the eclipse. Otherwise you can permanently damage your eyes. And don’t even think of taking pictures of it without use of a special filter! These glasses can be picked up online or purchased from local observatories, museums, and science centers; alternatively many retail outlets are picking up on the massive interest and are stocking up with the glasses.

Still not convinced that it’s worth watching?

That’s alright, but you won’t get another chance in the United States until 2023. I felt the same way when I first waited for the Transit of Venus, but it was an event that caught me by surprise and taught me something tremendous and worthwhile. Put yourself into a state of expectation and interest, the kind of wide-eyed anticipation we cherish from childhood.

Treat yourself to a few minutes of honest wonder and unabashed curiosity. You can bet your ass I’ll be out there too, watching with hushed observance and a belly hungry for wonder.


Error: API requests are being delayed for this account. New posts will not be retrieved.