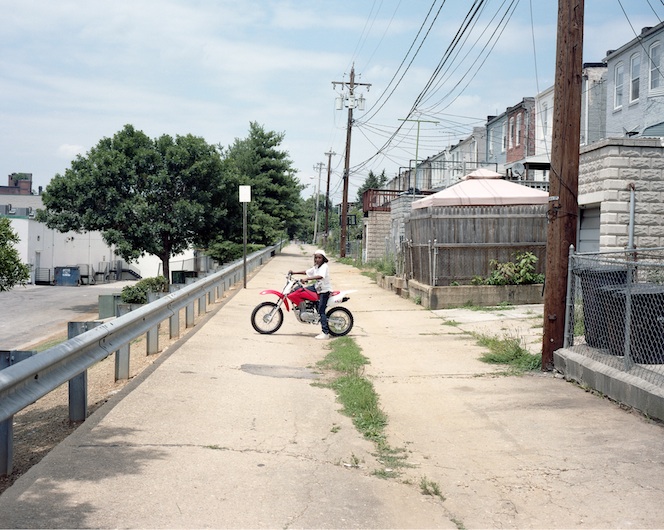 No one would accuse Baltimore of being an easy or laid back town. A hefty chunk of the neighborhoods and districts are the hardest of hard living in this country. These are the neglected urban landscape of brownstones and crumbling multi-stories that brought us the rebellion of hip-hop, lowrider culture, and…dirt bike gangs?

For more than a decade the streets of Bmore have played host to the antics of dirt bike and 4-wheeling youths displaying their riding skills and popping wheelies “up to 12 O’clock.” But what started out as 10 friends riding together at a time has ballooned into great anarchic carnivals of 30+ motorcyclist shutting down streets, blasting through oncoming traffic, and openly taunting police. The irony in all this is that becoming a biker boy is seen as a positive move away from the gang activity or hustling that is the de facto way of life in these modern day ghettos.

Enter Pug, the 10 year old we follow throughout the 90 minutes of 12 O’Clock Boys. He’s a smart kid, gives his single mother nothing but grief, wants to be a veterinarian, and longs for nothing more than to join the 12 O’Clock Boyz. And he’s got the chops. He skips school to put around on his miniature 4-wheeler and spends every moment he can around the riding crew and encouraging their antics – all while talking shit about how good he is and will show them all soon. Pug is keeper, and it’s a joy to follow him for three years as he works to join the outlaw crew.

I don’t believe in spoilers, so I’ll have to be careful here. The film is gorgeously shot and the lush, sensual cinematography is a revelation against the gritty and anti-social subject that it so aptly captures. Pugs journey offers us a window into a culture and way of life that many of us have no other access to. The film is both short and short on story, with little actually happening in Pug’s life during the span of filming. The other characters, his bombastic mother most definitely included, certainly make up for this and leaving a film wishing for more of everything in a movie isn’t really a bad thing.

12 O’Clock Boys is definitely worth your time, especially as it is also available on YouTube and other VOD services as well as select theaters. I enjoyed peaking into Pug’s life and was rooting for him to make, both into the Boyz and out of his life circumstances. Above all that, all I really wanted to do when walking out of the theater was to go jump on my motorcycle and pop my first wheelie…

You can watch the trailer for 12 O’Clock Boys below: