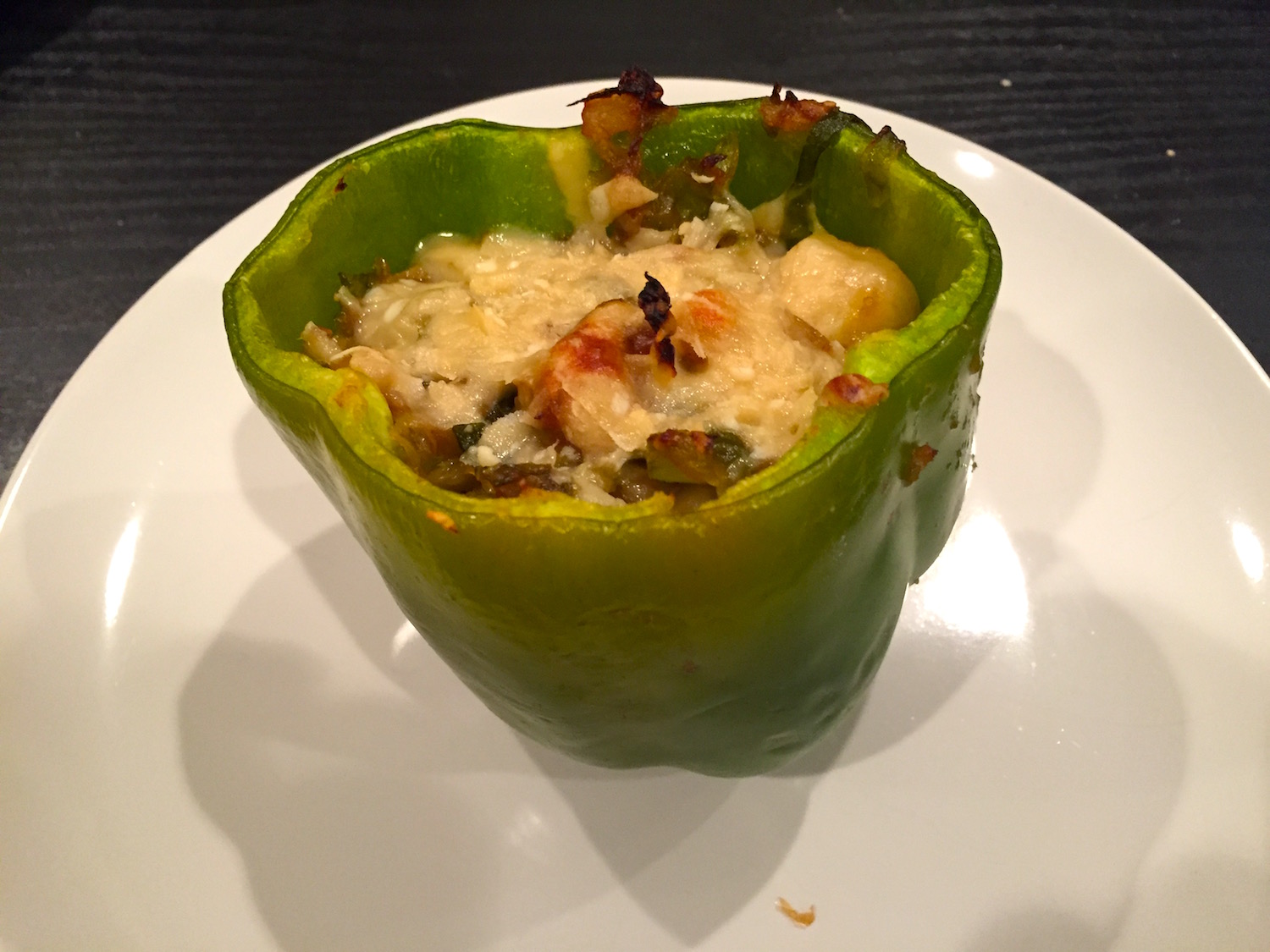 Eat All of Your Veggies Together with a Stuffed Pepper

These days, it seems there’s a misconception about the way flavor correlates with the nutrition value of your food, and that to eat healthfully, you don’t get to enjoy tasty things. I have a serious issue with this idea — and I’m here to prove it wrong.

“So how do you know what’s seasonal? Look for the cheapest produce at the grocery store. When something is out of season, it means the farmer has to go to more extensive lengths to produce it, and therefore the prices are higher. It’s that simple.”

The idea of eating clean stems from the notion that you’re consuming foods that are made from Mother Nature, rather than a factory. Yes, some people take it very far and won’t even eat certain oils or have any butter or use any salt, but that’s just crazy to me. Sure, you can never look at a drop of butter or chocolate again but what’s that going to do for you? Let you be skinnier for an extra year? That’s cool, I guess.

For me, I aim for moderation. I eat lots of veggies but I season them really well and sometimes cook them in a little butter. It’s called balance, people.

That’s where stuffed peppers come in. You can take all these delicious, healthful veggies and mix them all up in a yummy sauce and shove them in another vegetable and voila! You have a super tasty meal that also happens to be good for you. What’s better than that?

So for this recipe, I went with seasonal vegetables because I have easy access to them. How do you know what’s seasonal? Look for the cheapest produce at the grocery store. When something is out of season, it means the farmer has to go to more extensive lengths to produce it, and therefore the prices are higher.

Anyway, back to the veggies. I used Brussels sprouts, leeks, potatoes (sweet and russet), onions, and garlic. The Brussels sprouts and leeks can get finely sliced, and everything else should get a small dice (cubes) so it cooks down easily. There really isn’t an exact science to this, so don’t get stressed out about proportions. 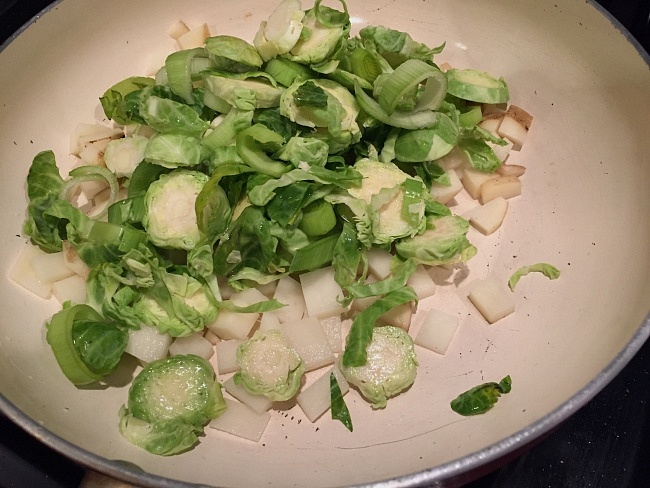 Saute all your diced veggies (except the garlic) in olive oil on medium heat until everything is nice and soft. What does it mean to saute? Essentially you’re just using heat and oil to pull the moisture out of the vegetables and cook them down. Make sure to season with salt and pepper while they’re cooking, and stir them around continuously so they don’t burn.

After a few minutes, you should notice a little crust forming on the bottom of your pan. Most people assume this is just burnt garbage and ignore it but they are sorely mistaken. This is all the good stuff! It’s the oil and seasonings and flavor from all the veggies that’s gotten nice and toasty. This is when we deglaze the pan. 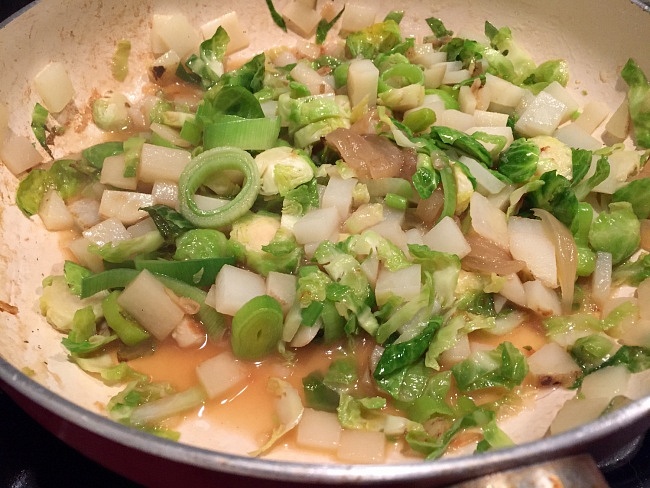 Turn up your heat just a little bit and pour in any kind of cooking liquid. This could be wine or stock, or if you’re me and you have random soups in the fridge, you can use some of the liquid for those. The more flavorful the liquid, the better your mixture will taste- I went with the beef stew I had just made and it was the bomb.com.

So you pour in just a smidge and you should hear a sizzle. Take this opportunity to scrape up some of the yummy bits from the bottom and mix it all together, then turn down the heat. The extra liquid helps your vegetables cook down even further. Every now and then, continue to add just a little bit of liquid just to help enhance the flavor. You’re going to do this until the potatoes are really tender.

WAIT! You don’t want to completely cook the vegetables though because you’re still going to bake these, and no one like soggy veggies. At the very end, right before they’re done in the pan, throw in your garlic. Garlic cooks extremely fast and if it stays in the pan too long, it can burn. 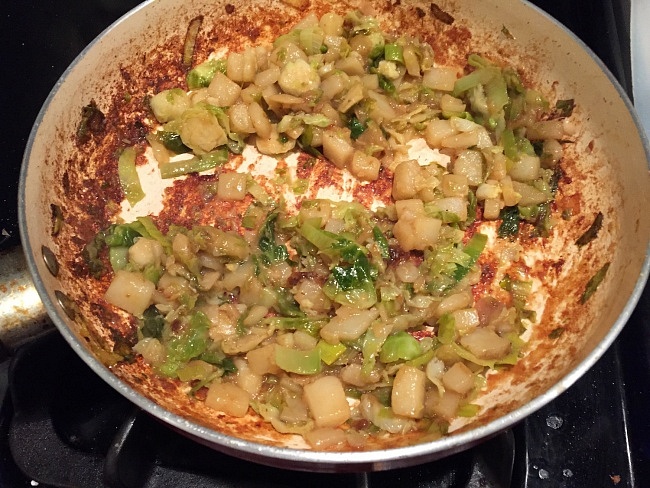 Okay so your vegetable mix should be looking all delicious and it should smell pretty amazing in your house too. Let it sit for just a second while you prep your peppers.

You want to make sure it’s a pretty big pepper otherwise it won’t fill you up. Slice off just the top and core out the seeds so you have a cute little pepper container for that tasty mixture you just made. I like to use a high-walled pan so they don’t fall over. You can also shove some foil in between to help hold them up. 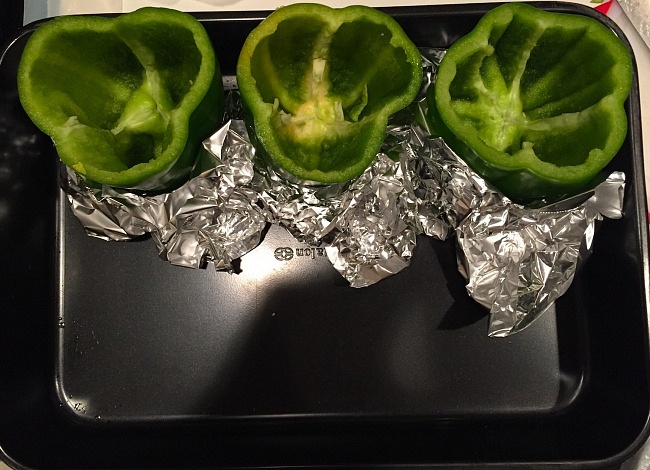 Now, pour the mixture into each pepper so it comes just to the top of the open pepper, and then top it with cheese. I went with parmesan but you could do cheddar, pepper jack, or really any kind of firm cheese you want. The goal is just to get something that melts well. 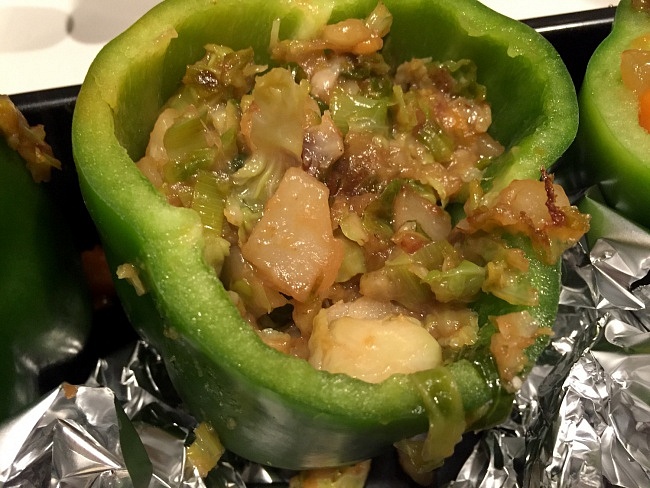 These go in a 375 degree oven for about 18 minutes, or until the cheese is completely melted and starting to brown. 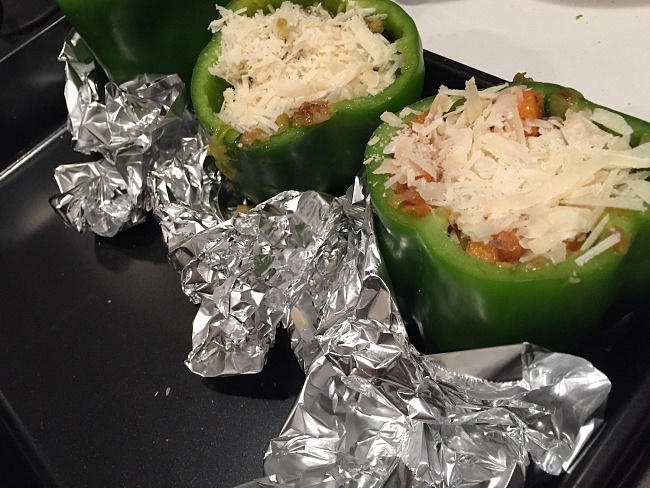 Here’s the great thing about stuffed peppers. You can stuff them with literally anything. Throw some browned ground beef, or shredded chicken, in there. Or maybe some chorizo and corn for a little Tex-Mex flair? The combinations are honestly endless. Just make sure you don’t cook the internal mixture 100% before it goes in the oven or it could come out dry. Get creative and remember, eating healthy doesn’t have to be painful or tasteless! It’s all about moderation.

INGREDIENTS | For One Pepper