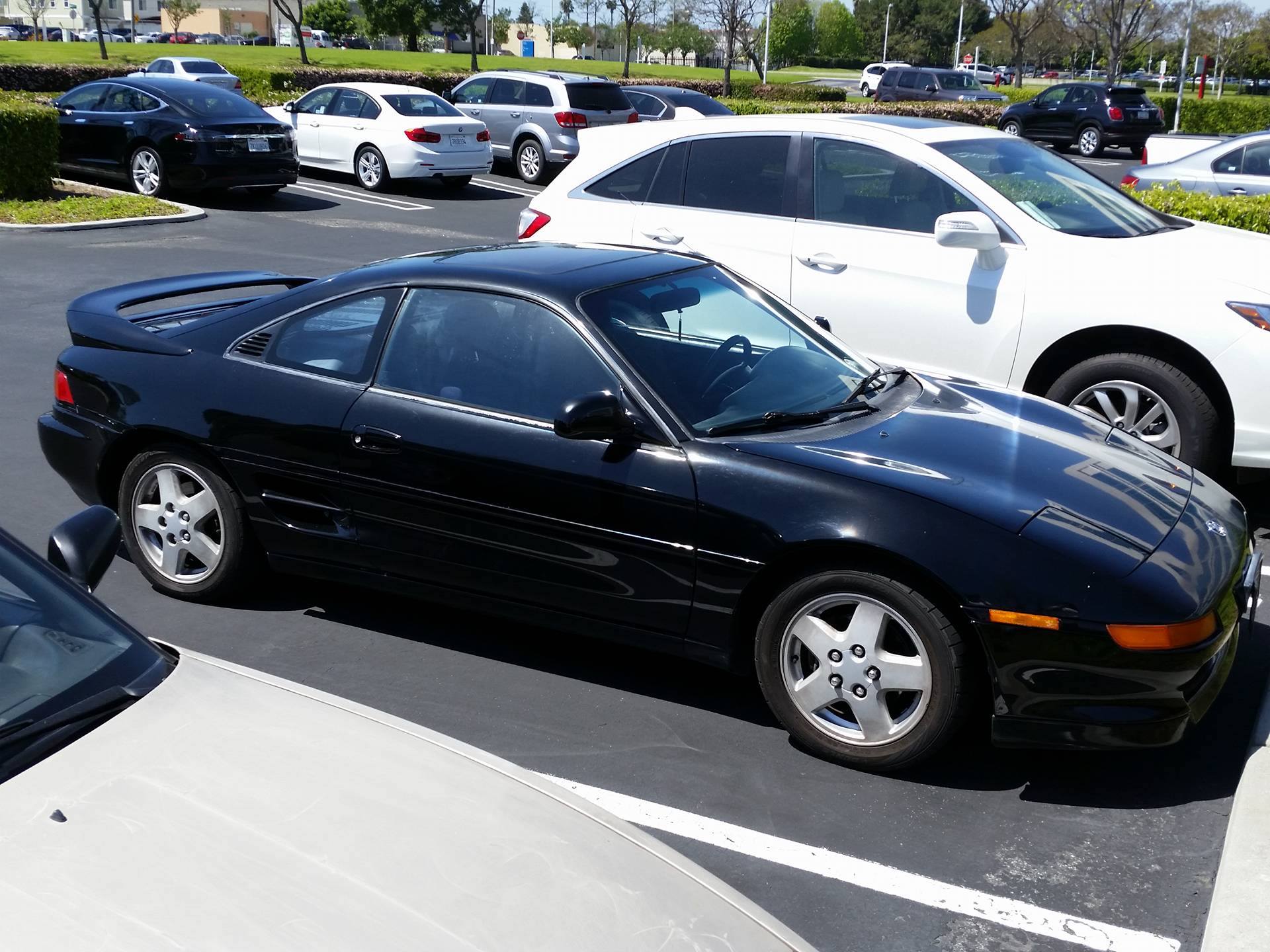 I suppose that with the final wrap of our Will It Flip Audi series my friends started to learn that I work on my cars. Well my friend Josean asked me to help him inspect a used car from Craigslist, but not just any used car, a naturally aspirated 1993 Toyota MR2 that will also become his very first car. He had spent months looking for a 90’s Japanese car that meets both his price and condition requirements and thinks this one might be the one. The craigslist ad looked promising and the description didn’t beat around the bush. It was decently repainted in black, looked almost all original, and was automatic which was actually a selling point for him because he had just acquired his license and was not well versed with the all mighty clutch yet.

Well, as almost all car related stories go with me, nothing is ever easy. On the day we met up to take a look at the car, we got a call from the owner telling us to turn back and go home. He was stuck at the gas station after filling up the car and said it wouldn’t start; the owner felt bad and didn’t want to sell us a car that had problems. Being that we were already five minutes away from where he was, we asked to see the car anyways. There was probably also a really good chance we can get the car for almost next to nothing. Upon arriving I told my buddy it was a good sign that he was kind enough to let us know about the issues. This means that though the car has obvious problems, at the least the seller seemed honest about it, a key factor when buying anything used from anybody; an advice that you will see I myself forget in a later article.

By the time we arrived at the gas station, the owner was able to get the car started again and we all took it turns for a test drive. The engine has a little over 200k miles and noticeably needed a tune up, the transmission flush, but despite the issue relating to the car not starting up, everything else seemed to be fine. It was actually really strong and well kept considering the mileage. To top it off, the owner had a master binder of maintenance receipts dating back from the first owner. This is like the car enthusiast equivalent to finding a second pot of gold at the end of the rainbow. Seeing how transparent everything was, my friend insisted in purchasing the car and was able to knock off a little more than 30% of the asking price due to the unknown issues. The only stipulation we had was that the current owner is to keep the car at his garage until the next week. I figured it should have a tune-up as we try to debunk the problem at my place in the South Bay before Josean makes the 30-mile trek back to the Valley.

Now here’s where the real adventure happens. The following week Josean showed up to my place with the necessary parts for a quick tune up. We met the guy at his work and brought upon us the good news that he drove the car there and it worked fine. He handed over the keys and we got in our respective cars. The MR2 fired right up. As we left the parking lot it started raining. We presumed that it would make the three-mile trip back to my place with no issues. Just as we were two main streets away from my place, it started to rain harder as we were stopped at a red light. Once it turned green, I shifted into first gear and accelerated only to see Josean in his newly owned MR2 in my rear view mirror getting smaller and smaller. It died. 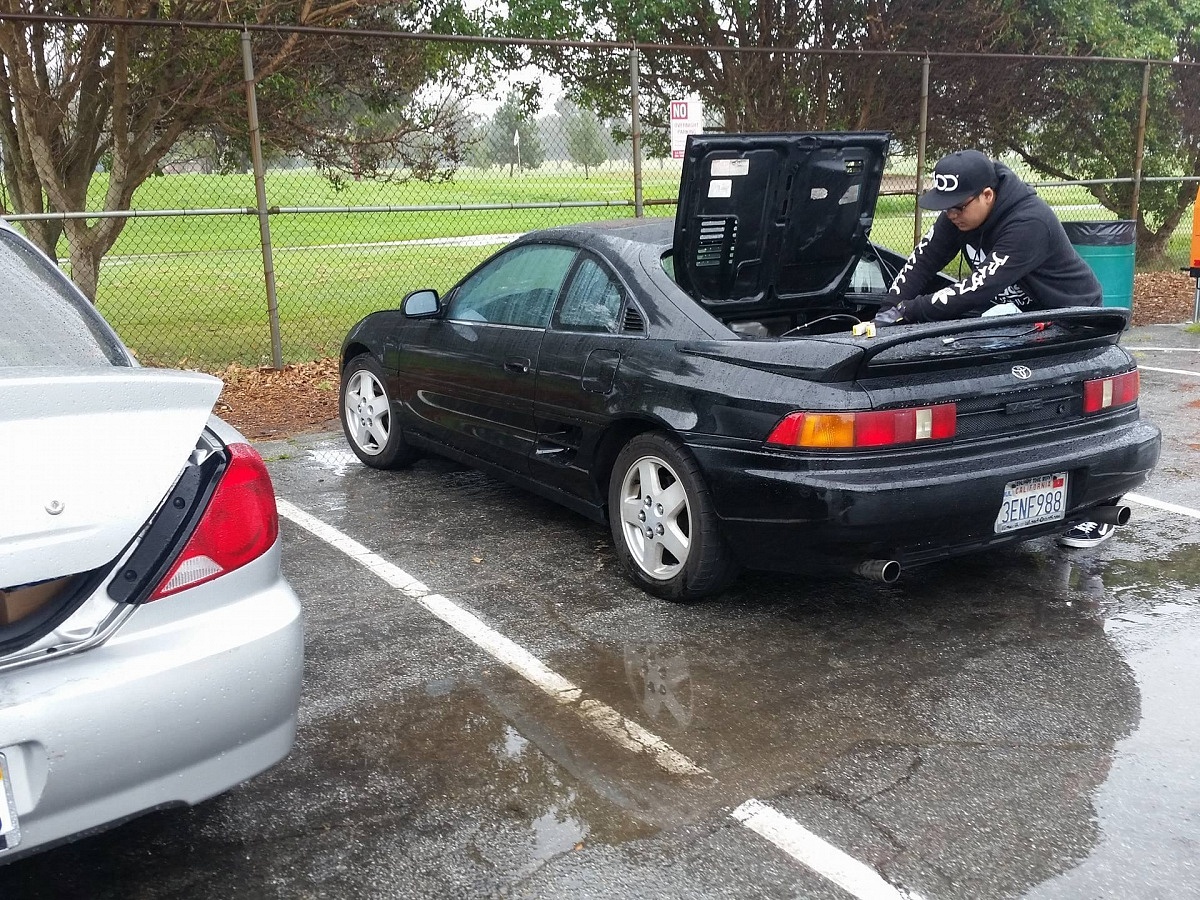 As I quickly realized what happened, I parked my car and helped him push the car to the closest lot nearby a baseball park. Since the both of us didn’t have AAA and the car was still too far to push it back to my place, I suggested that we take a chance and try the doing the tune-up in the parking lot while it rains. It was a crazy idea but at the same time we figured since we had the parts with us, why not roll the dice and see if it works. I quickly grabbed my toolbox and an umbrella from my place and we went right to work as soon as I drove back. The rain shifted and started to pour heavily as Josean and I started wrenching on his new car. We spent a total of two hours working in the rain swapping out the spark plugs, spark plug wires, and distributor. The trickiest piece of the puzzle was getting the distributor lined up since it was halfway down the bottom of the block; that alone took an hour. Eventually all was in place, we greased down, dried up, and he got in his car. The key turned and the engine cranked immediately into life. The all mighty MR2 lives!

We quickly packed everything up and made our way to my place. Ironically it stopped raining once we left the parking lot. All the joy in the world was felt. The car finally made it up my driveway only to idle oddly rough…and die. This time around it didn’t even start. Well, at least we tried and sometimes you got to know when to throw in the towel. I got in contact with my local mechanic and had him order us a tow truck to his shop. 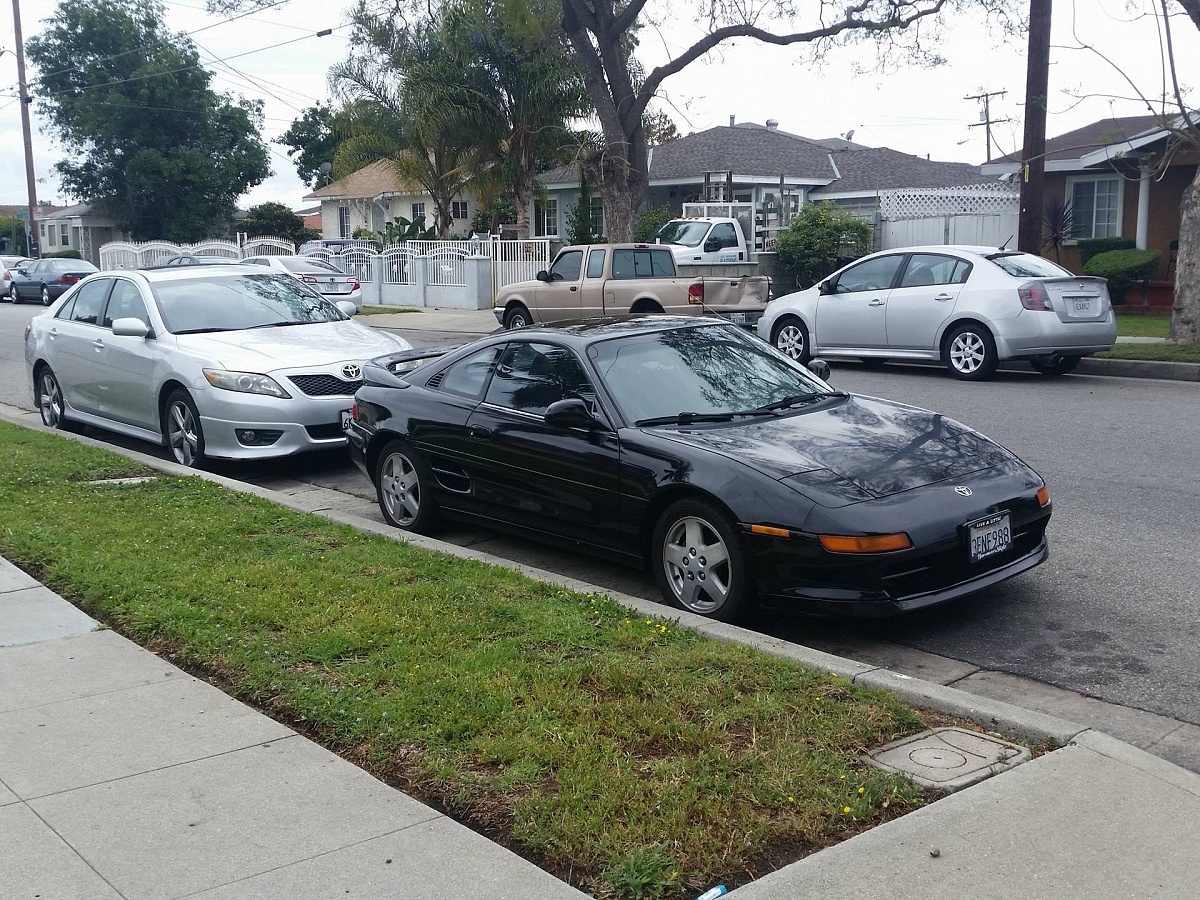 The week after that, we learned that the timing was off on the distributor and the reason why it died afterwards was due to an electrical issue somewhere in the fuse box. Fair enough. Since this debacle, Josean has been daily driving the MR2 with no issues and at the end of it all; the amount spent on the parts, towing, and shop repairs was still under the original asking price of the car. A rough win but a win nonetheless.