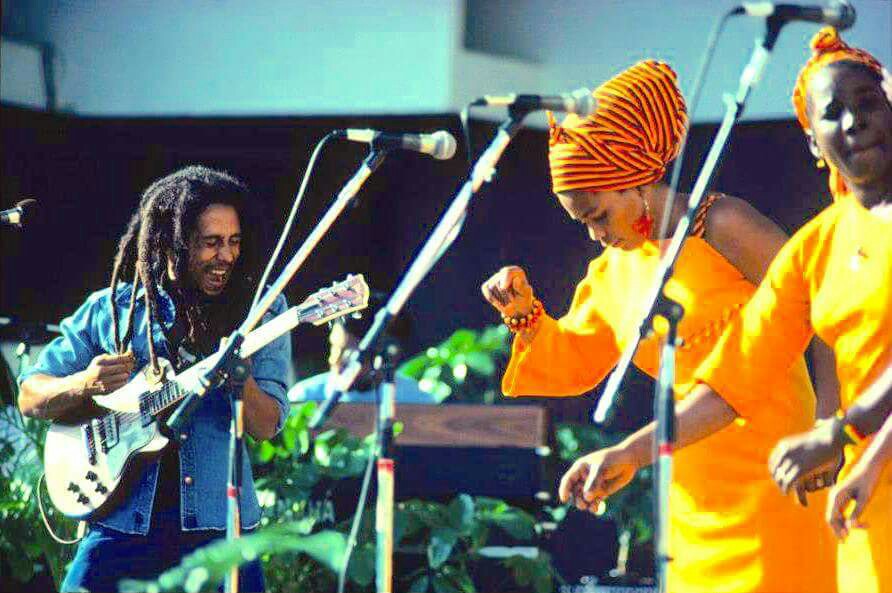 For my money, there are better Bob Marley albums, even Bob Marley & the Wailers albums, than Exodus (I’m a huge fan of their next album, Kaya), but none more fully represent the many-sided artist – one of the most formidably pervasive voices of our times, and the man who’s music I most frequently turn to in times of both pain and happiness. Forty years later (released June 3, 1977), Exodus is still the beckoning voice of the downtrodden and the spiritually uplifted, still widely accepted as one of the greatest albums in music history (Time called it the best of the 20th Century), and perhaps even more relevant and necessary now than ever.

“With Exodus, Marley somehow overcame the pain of being forced from his homeland, which had been run into poverty, violence, and hatred by 400 years of colonialism and its aftermath. But he didn’t forget it, as the first half of the album – “Natural Mystic,” “So Much Things to Say,” “Guiltiness,” “The Heathen,” and “Exodus” – so poetically informs, in a way that even the best books could never do.”

Before we get into the album itself though, it’s important to discuss the events that led to Bob beginning recording at Harry J. Studio in Kingston, only to make a real-life exodus from Jamaica, to London, where he recorded the rest of the album at Chris Blackwell’s (“the single person most responsible for turning the world on to reggae music.”) Island Studio.

It was 1976, two years after The Wailers split up, and Bob, Peter Tosh, and Bunny Wailer had gone solo. It was also an election year, and political tensions had boiled over into violence across Jamaica. In this atmosphere, according to Daily Beast, Bob agreed to play one song at the Smile Jamaica Concert in Kingston, as his attempt “to present a message of apolitical unity and love, not one of agendas and divisions.”

Before Bob fully realized the concert was being politically hijacked by many sides (a loaded assertion these days, but in this case, true), while practicing for the show, he and his bandmates got brutally gunned down by one side or the other (if you want to get an idea of just how f***ed-up politics had gotten at this point in Jamaica, check out Marlon James fictional masterpiece, A Brief History of Seven Killings). Four people were shot in the attack, including Bob, in the arm and chest, and his wife and backup singer, Rita Marley, in the head. Two days later, Bob played that one song, as well as many more in a magical 90-minute set, powered by the strength of Jah almighty.

It’s a transcendent performance, to be sure, and part of the lore that makes Bob more of a deity than a musician at this point. But none of that could have been achieved without Bob’s next move: Exodus. Realizing Jamaica had become toxic and dangerous, Bob moved the just-gelling new band – including the incredible I-Threes (Bob’s three little backing birds, Rita, Marcia Griffiths, and Judy Mowatt) and brand-new stud guitarist, Junior Marvin – and he got them crazy bandmates out of town, first to Nassau, and then on to London.

With Exodus, Marley somehow overcame the pain of being forced from his homeland, which had been run into poverty, violence, and hatred by 400 years of colonialism and its aftermath. But he didn’t forget it, as the first half of the album – “Natural Mystic,” “So Much Things to Say,” “Guiltiness,” “The Heathen,” and “Exodus” – so poetically informs, in a way that even the best books could never do. You feel Bob’s pain. You feel humanity’s pain. You know, deep within, that Bob’s right. That the struggle is and always has been real, and if you really open your ears and soul, that righteousness is on the side of the people.

And then you listen to the hit and love-song filled Side 2 – “Jamming,” “Waiting in Vain,” “Turn Your Lights Down Low” “Three Little Birds” and “One Love/People Get Ready” – and you realize that there’s a way out of all this oppression and hate: love. Bob feels love so hard you feel impregnated by it. Indeed, Bob’s love overcoming all that pain that makes his music truly soar. To be sure, no artist speaks more divinely to me than he. I need only put it on, and my whole being finds strength and calm, in knowing, undoubtedly, that One Love surrounds us all.