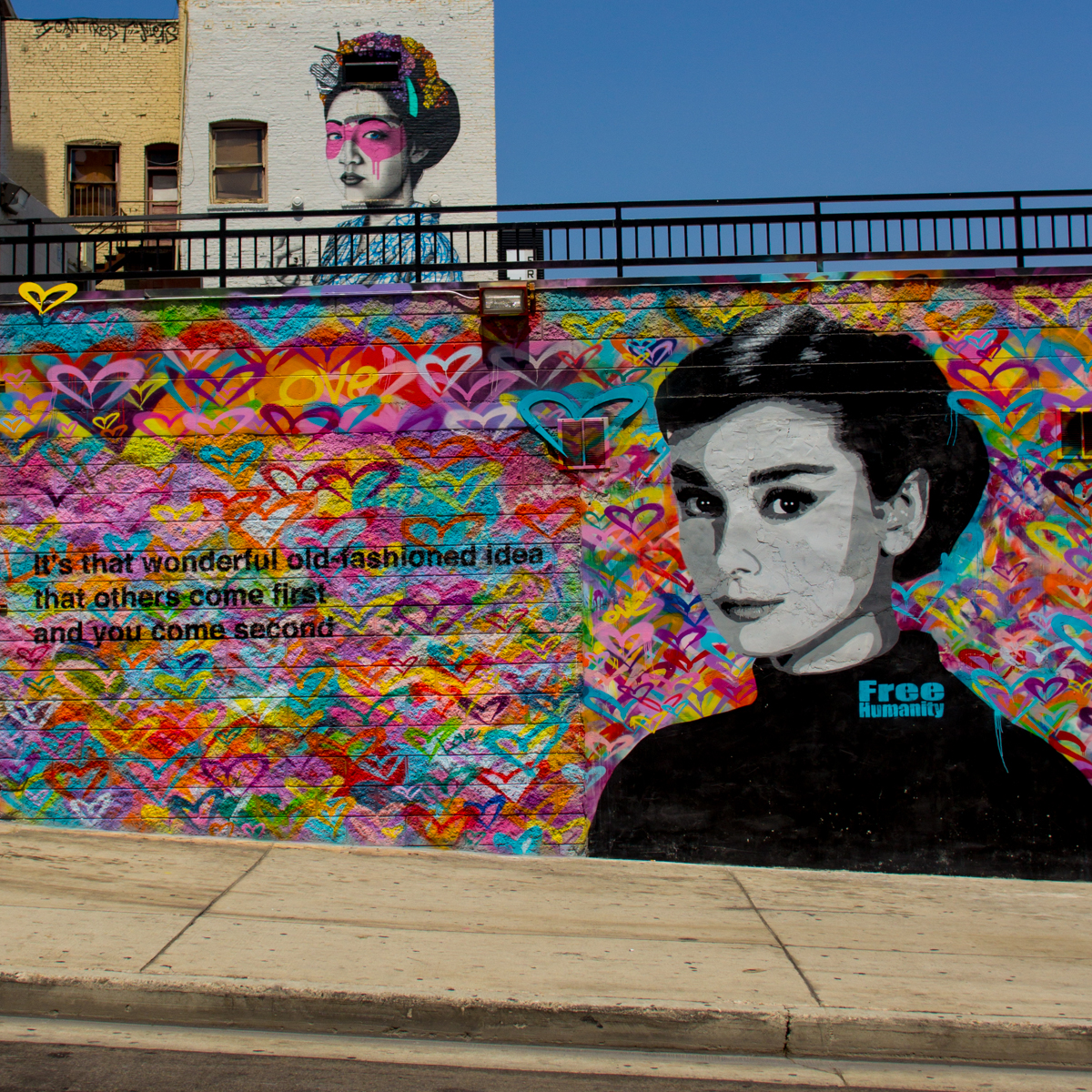 So here we are, our third and last day in Los Angeles. We’ve taken fairly easy on day one and day two, but now it’s time to get serious. With an impending flight out of town, we’ve got to cram everything in this amazing city into today. It is evident by the sheer number of shops on every block that Angelenos love their donuts, so what better way to kick off our day than a stop at the best-of-the-best Randy’s Donuts in the Inglewood neighborhood. 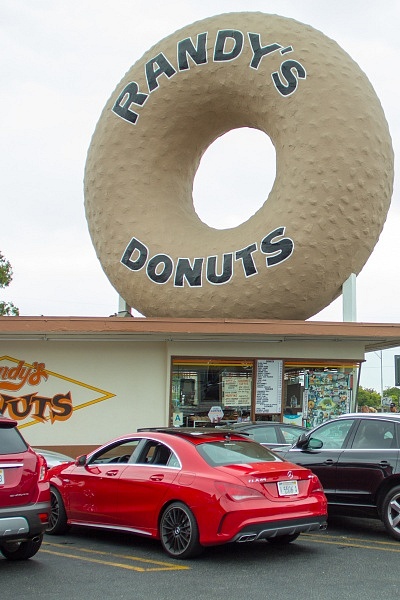 Like many of our LA stops, Randy’s is an institution both because it is well-loved by the locals and because it has been featured in all sorts of movies and photo shoots. The giant donut on the roof is a landmark of the city. And while they could likely remain famous just for having a big fiberglass pastry up top, the donuts at Randy’s are indeed the best in this wide city. Far from just a tourist attraction, Randy’s serves up soft and fluffy goodness on a daily basis. Buying one will never be enough, and its hard to go wrong with any of the options. We tried them all (for science!), and were hard pressed to pick out a favorite.

Full of enough calories to put down Rosie O’Donnell, we find ourselves in the South-West corner of Los Angeles with a hankering to head downtown and check out its burgeoning street art scene. Between downtown and us lies the storied area of South Central LA, so rather than take the freeways, we steer our CLA AMG onto the surface streets and explore this much-maligned area for ourselves.

We detoured over to the most (in)famous South Central neighborhoods of Compton and Lynwood, popularized in many early gangsta rap songs. But South Central has come a long way since ’88, and it couldn’t have been more welcoming to two pasty white guys. We met some of the nicest people of our entire LA trip here.  It’s still an absolute tragedy that the neighborhoods and streets are in the condition they are in, and we didn’t see a single police officer there (unlike Santa Monica, where they are on every corner), but you can forget all about the urban legend nonsense that you’ll be shot just for wearing the wrong colors while driving through. 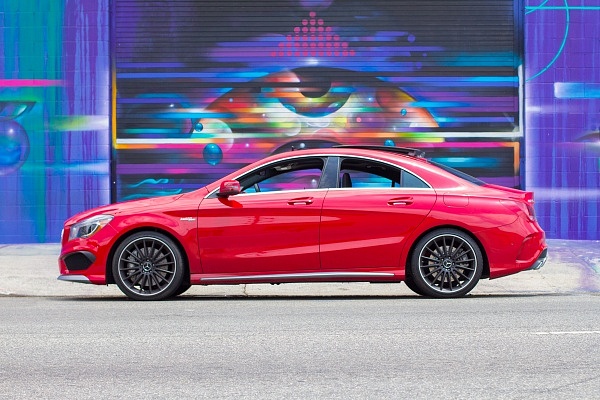 Now if you want a really sketchy neighborhood, you want downtown LA’s skid row. That is where we are headed, but not for the stabbings and homeless encampments but for the exploding and vibrant street art scene. We’re trading in tags and simple “bombs” for full blown murals and commissioned wall pieces. The arts and fashion districts of downtown are undergoing a bit of a renaissance as of late, and the gentrifying hipsters have begun moving in and doing up old warehouses as upscale condos and coffee shops. That’s not to say its a particularly nice area. There are many LA residents who would rather walk the midnight streets of Compton than head downtown. Bu it’s at this juxtaposition that street art has found its home – between the indifferent poor and the appreciative yuppies.

Shepard Fairey cut his teeth here (there are still original Fairey’s to be found around too), Banksy and Space Invader have made their presence known, and of course the litany of local artists who are turning the downtown wasteland into an outdoor art gallery. From stickers and wheat pastes to full building walls, downtown is a riot of color and imagination.  Turn any corner and you’ll be confronted with some style of expression and message. It turns this ghostly part of Los Angeles into a truly cultural heartbeat of the city.

The same fashion district that is home to much of this art is also ground zero for the local garment industry, and for crazy good shopping. The area is full of bodegas and open-air shopping centers full of the strangest knick-knacks, wholesale fabrics, and retail suits and shoes. This is a tourist-free zone to get great deals on clothes and mingle with the real locals of this beautiful city. I couldn’t resist picking up a pair of caramel monkstrap shoes that were only $25 in one of the stalls. If these only lasted one weekend they’d be worth it at that price, but they are actually holding up great and are in regular rotation. Chalk it up to buying your clothes from the original source wholesalers. 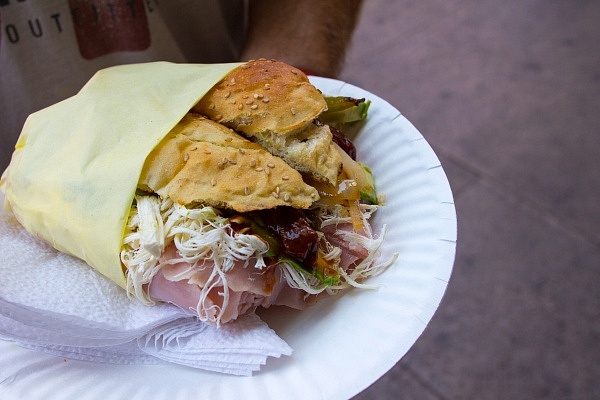 Nothing goes together like shopping and eating, so it was time for lunch at one of downtown’s many street vendors. With the high proportion of Latino garment workers living or working downtown, the street food here is not watered down or prepared by chef hat wearing posers; they are the real deal here. Most of the carts don’t event have a single english word written on them. It is this subtle cue that tells your stomach – “Prepare thyself for some awesome f@&$ing food.” Oh and it was. Going authentic will do that. I couldn’t tell you the name of the cart, or even remember what we ordered, but it doesn’t matter. Just find the truck with the a large group of middle-aged latino women eating there (those would be your garment workers), and queue up for a fantastic lunch. Get what everyone else is getting, and chow down. You’re welcome.

With a hearty meal in our overstuffed bellies, it is time to depart this metropolis we have so fallen in love with. That means it is also time to say goodbye to our Mercedes CLA AMG. From Beverly Hills and Malibu to dowtown and Lynwood, we’ve driven to as many corners of this city as we could cram into 72 hours. Los Angeles is too big to be knowable, but that is what makes it great. It is ever evolving and changing. It actually CAN be everything to everyone. And while the CLA AMG can’t pull off that trick, it wasn’t designed to. If you want a boulevard crushing slice of luxury, you won’t go wrong with the CLA. And if you want a city that is less hussle-and-bussle and more live-and-let-live, Los Angeles is the place for you.

As we make our way to LAX, we travel through some of the same neighborhoods we’ve already visited. Downtown, Koreatown, and West LA bring back memories that we can’t believe are only 48 hours old. We know we didn’t scratch the surface of this town, but there are some locals who could say the same thing. We’re happy that this will always be more to see and discover here, and we can’t wait for the opportunity to do so. Until next time LA. 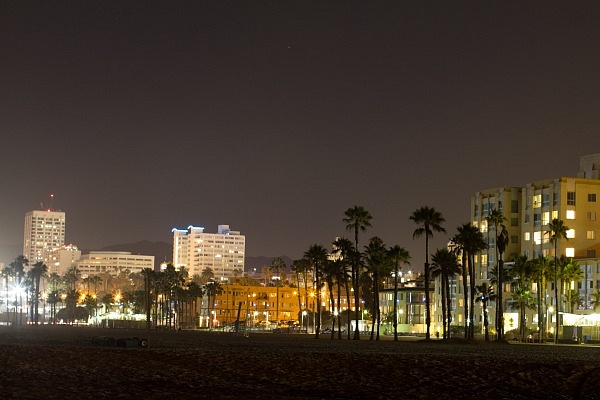