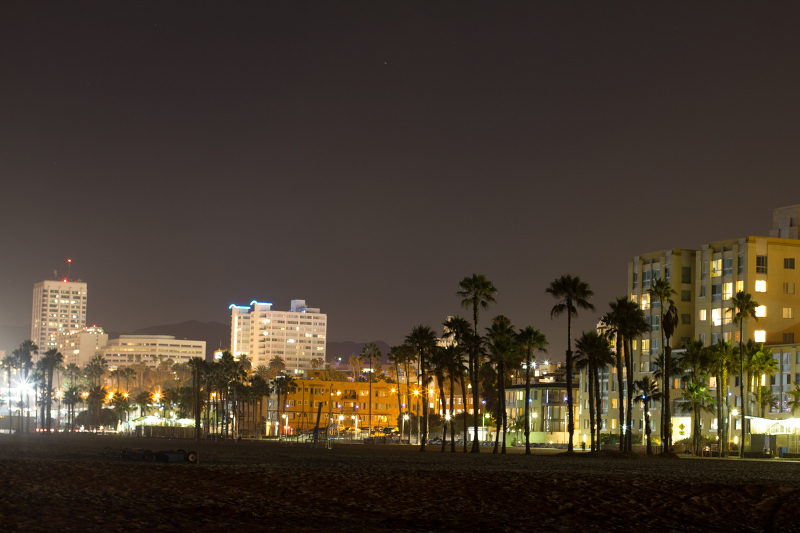 The City of Angels is a sprawling morass of a metropolis. Los Angeles is almost solely made up of hidden destinations and righteous food. And this is certainly a car city, not walkable by any stretch of the imagination. This town is big, expensive, beautiful, big, diverse, crazy, superficial, big, wonderful, laid-back, always going, and big. If you’ve got a weekend here, you’ll need the right ride and the right list of destinations to see anything close to all of LA’s wonderful local color. Luckily, we’ve got both. 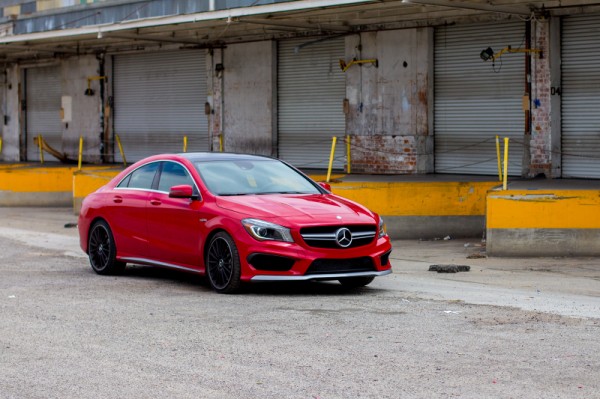 With a town this size and all the best spots hopelessly spread out, you need a chariot capable of getting in and out of tight situations, one that carries ample speed to get you to and fro, and has the right amount of je ne sais qua to fit in from Beverly Hills down to the barrio. Enter the CLA AMG we’ve got for the weekend. This 2014 Mercedes is bathed in brilliant Jupiter Red to announce your arrival to anyone that can see it, and has an addictive exhaust bark to relay the message to all those who don’t. This thing is so LA it probably has an agent. With the right steed in hand, we’re off to capture the magic of this city in one action-packed weekend.

LA’s series of neighborhoods are microcosms unto themselves. Each is formed around some racial, ethnic, economic, or spiritual commonality. These groups and areas are ever-shifting and morphing, making LA truly unknowable. But we’re still gonna try our damnedest this weekend!

The city takes up the area between the San Gabriel Mountains in the East all the way to the ocean 40+ miles to the West. When most of us picture LA, the image is one of palm trees and sandy beaches. It’s certainly not a bad image. Locals call the area pictured in this mental image the West Side, and it is where FactoryTwoFour has set up our base camp. Venice Beach is still a neighborhood of lingering ill-repute for being on the sketchier side of ‘hoods, but it is in fact heavily gentrified and getting more so every day. It is still brimming with character though, and we’re glad to call it home for the weekend. 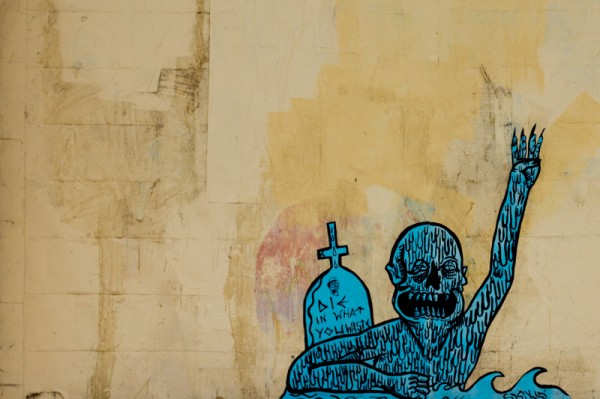 After arriving, jettisoning our luggage, and freshening up our first stop is the Venice Board Walk and the beach. ‘Natch. Rounding the corner onto the boardwalk is like leaving the United States and entering Tijuana if it was run by a pot smoking street artist Willy Wonka. It is a truly wonderful place full of strange and frightening sights and sounds. Marijuana dispensaries every 50ft or so, homeless people dressed up as mountain men wearing roller blades, or tacky t-shirts with inappropriate messages or cleverly re-worked corporate logos – all this can be yours and much much more on the Venice Board Walk.

Just steps away, the beach offers us needed respite from the crazies and the tourists. It’s always 70 degrees here. Always. But it’s still LA, so the water is neither clear nor particularly clean. Swim on, we certainly did, but take a shower afterward. 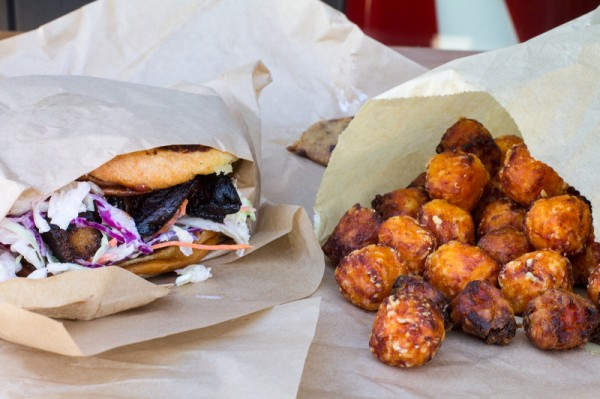 On to lunch and Abbot Kinney – a street recently declared The Coolest Block in America by GQ Magazine. Abbot Kinney is a simple stretch of asphalt less than a mile long flanked on either side by upscale boutiques and holier-than-thou restaurants and bars. Several top chefs have outposts here, but our destination is Chop Daddy’s. This unpretentious BBQ joint offers up killer grub to the hipsters of Venice without falling victim to their ways. No dried flowers in whimsical vases, no strange food pairings or unpronounceable ingredients. Just damn good BBQ sandwiches and fried pickles. Get on it.

Now it’s back in the righteous CLA and up to Santa Monica. This town is akin to Venice’s older, responsible brother. The strange and unique are not welcome here. It is a very safe and predictable place. And very boring. Santa Monica is the outpost of the Old White Person. If worldwide chain restaurants and brands are your thing, and you enjoy paying $16 for an “artisan cupcake,” you’ll fit right in. What Santa Monica has that is of interest to us is a world-class farmer’s market. Chefs from across the city descend on the Santa Monica Farmer’s Market to grab the freshest produce to bring back to their Michelin-starred restaurants. And of course to talk some shop with their chef buddies who they invariably run into. Hosted on the 3rd Street Promenade ever Wednesday and Saturday, there is no better place to pick up the freshest California fruit, OR find a very fresh Californian date to join you for dinner. Browse around, try a sample of the best strawberries you’ll ever eat. Grab a fresh baguette and some flowers. Just don’t be surprised if you start fighting over the last bunch of spinach with Chef Sang Yoon.

Pro tip: avoid the Santa Monica Pier. It’s an overcrowded tourist trap brimming with lame carnival rides, terrible food, and worse street vendors hawking shot glasses and neon-colored visors. Everyone goes to the pier because they think its a must-see Westside attraction. Don’t be everyone. You can see it plenty well from the great bluffs overlooking the ocean, and there you will avoid being bunched in with fat mid-westerners who sweat too much and shower too little.

So after samples the local ware and partaking in all the good and bad the Westside of Los Angeles has to offer, it’s time for…………….a nap. But after that, it’s time for dinner! Why yes, our city excursions do revolve around food stuffing our faces. What of it? 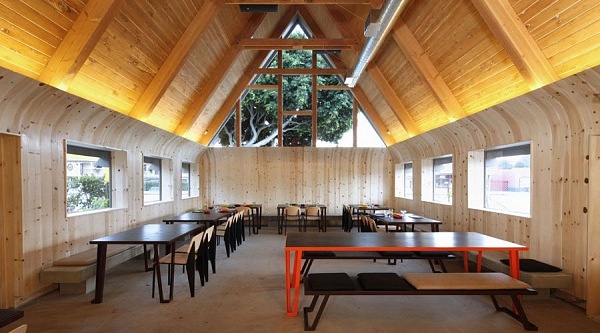 Tonight we’re rocketing in our svelte Mercedes to A-Frame, Roy Choi’s joint in Culver City that is on our go-to list for LA. The atmosphere is fresh, the beautiful people are right, and the plates of Korean-American mashups are wholly unique anywhere in the world. We pig out on perfectly crisp Beer Can Chicken, seaweed covered popcorn, sublime duck, Asian ribs, and one of our party even hogged the enormous burger all to themselves. And you know we didn’t leave without getting the epic pound cake churro. Damn good.

Since Chef Choi’s just treated us so well, we’re off to cap our first day in Los Angeles at his Abbot Kinney bar The Brig. It’s small, modern, and incredibly loud when a band is shoe-horned in there, but there’s a pool table in the back and more beautiful people to be enjoyed. After hustling a group off the billiards table, we camped out on it for the rest of night, getting tipsy on Manhattens and reflecting on the adventures behind us and those still in front of us. When we call it a night, our minds are filled with the big day ahead. Tomorrow, we stretch the CLA AMG’s legs in the Malibu Canyons…