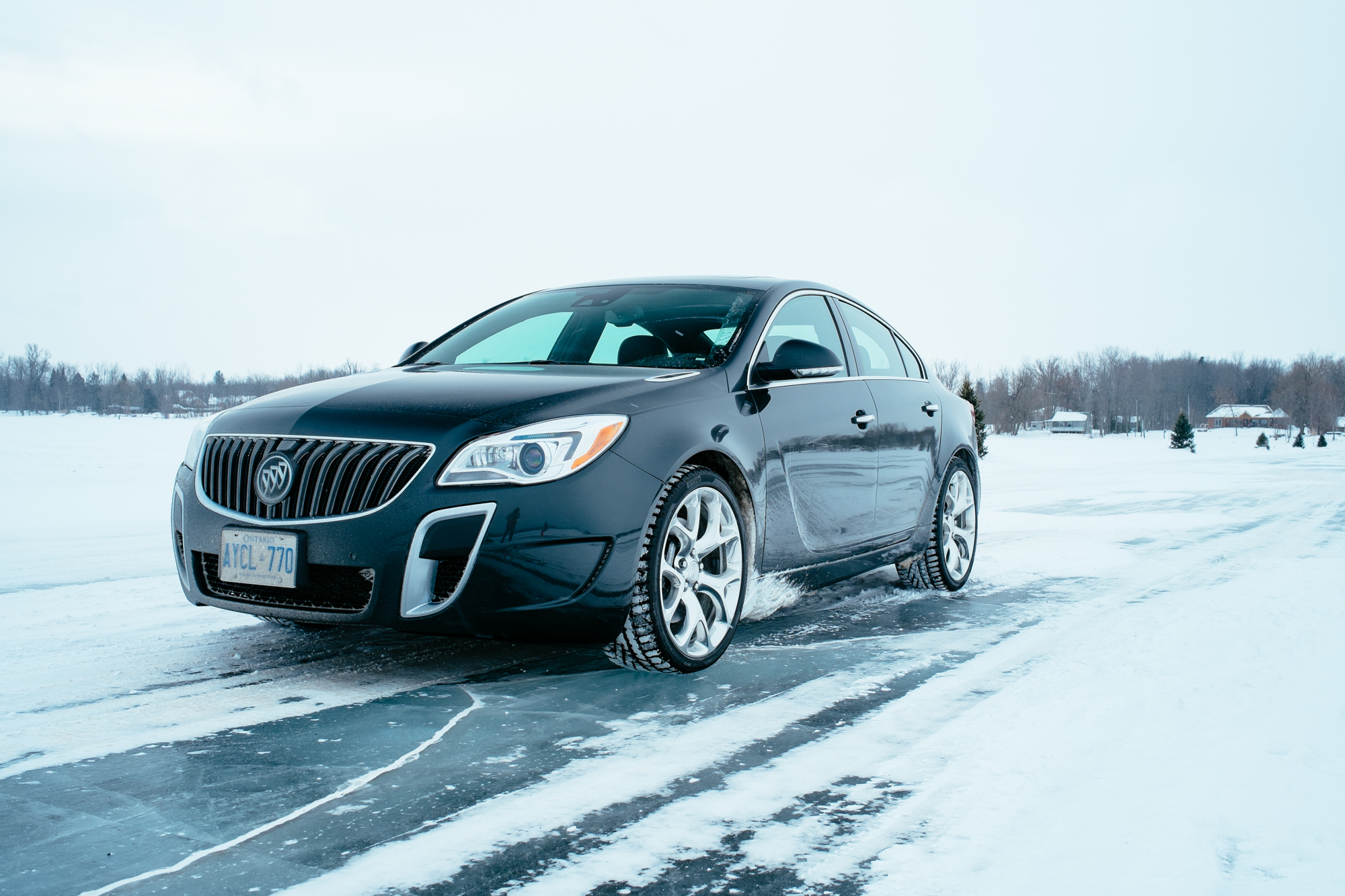 This winter has been one for the record books. The northeast has received record amounts of snowfall, parts the south have been incapacitated due to ice and bad planning, and the Great Lakes have frozen solid. With all this perilous weather causing damage, delays and downright misery, it’s good to have Buick’s responsive and impressive 2014 Regal GS AWD at your disposal.

Part of the rock solid feel the Buick maintains in inclement weather, is its front-biased AWD system that constantly calculates changes in road surfaces and also driver inputs. If you’ve ever been nervous the rear’s gonna come around on you, fret not. With the GS’s new Haldex system, only the most barbaric push on the throttle would cause the Buick to oversteer—with the ability of the system to send 90-percent of the power to the rear wheels if front wheels lose traction.

Buick’s Torque Transfer Device (TTD) is the heart of the AWD system by preemptively applying torque and splitting it dependent on what conditions you are driving in by making millisecond adjustments in real-time; and completely seamlessly. Combined with the electronically limited-slip differential (eLSD), which controls both front/rear and side-to-side actions, the GS AWD is impressively suited for ice and snow. Two performance modes, Sport and GS, increase suspension feel and engine mapping with the GS mode taking characteristics a step sportier while also increasing steering feel.

Navigating the 1.4-kilometer ice and snow covered track at Toronto’s ICar complex, the Regal’s driving dynamics begin to expose themselves when pushed to the limit. With an also brand new, 2.0L turbo four-cylinder (borrowed from the Cadillac ATS) the Buick is quick and nimble thanks to a wide torque curve and 24 psi of boost from the 259hp, 295 lb.-ft torque turbo. Long-winded drifts, left-foot braking and modest acceleration left me, to be honest, quite impressed at this outlier in the Buick name. (Granted, I haven’t driven other current Buicks, but based on what I was going into the review expecting, I came out shocked.) The constantly changing conditions of the surface of the track allowed for Buick’s HiPer Strut front suspension to get a workout testing the camber control and impact isolation when trying to realistically put power down in a extremely low-friction environment. I left the Buick in ‘GS’ mode to increase effectiveness of the suspension and also engine mapping.

HiPer strut really helps with the front-biased GS by splitting the steering and suspension functions instead of having the front suspension handle both loads simultaneously, often ending in nasty torque steer. Basically, there’s more of the contact patch of the tire on the road even with side-to-side steering inputs and acceleration: The system is complicated in theory but works flawlessly in execution.

The Buick GS takes a few moments to really digest what you’re looking at, and that’s not a bad thing. It’s a very handsome car with subtle bits of distinction that highlights its passive aggressive demeanor. Certain angles it takes on a 5 Series and others it reminds me of the Pontiac G8, just more svelte. It’s a looker, especially with the optional 20-inch alloys on 255 series tires all around. Subtle touches such as the integrated lip spoiler, hood vents, front fascia inlets and even the—what I would refer to as—black-chrome grille add flair to the once ho-hum brand’s mid-size sedan.

Inside, the new 8-inch configurable gauge cluster adds to the GS’s modern feel by offering two modes: Touring and Sport. Steering wheel controls allow adjustments on the fly: mobile phone, radio, GPS; while also allowing complete control of the optional Adaptive Cruise Control lane departure warning, forward collision alert and following distance indicator. Seats were pretty good, though I wish there was a little bit less inflation on the standard bolster. American cars, particularly GM, often seem to pump air bladders on high into the seats, which can make long drives somewhat uncomfortable: You feel on the edge of your seat most of the time, and that’s not even because of frantic driving by yours truly.

There are some downsides. The touch sensitivity for the climate controls aren’t nearly sensitive enough. I often found myself repeatedly pushing the buttons to make sure it was working. And when driving, you don’t want to have to second guess yourself. Standard hard buttons would work wonders and with the right design wouldn’t look out of place. The price is a bit of a hard pill to swallow at first, but you are getting a lot for the $45,500 price on my tester. For some of the Germans, you’re looking at over $50k for a similarily equipped unit and based on the testing I’ve done with the other brands, Buick stands ground firmly in the technology space. Ride and handling is another thing. Not that the GS is bad, it’s actually very capable, but it’s just not as fine tuned and rock solid as the other competitors.

Granted Buick will have to win over the masses that still might believe Buick is set in their ways. They’ve won me over. They’ve proven that they aren’t sitting still and living in the past where they merely skated along, they are providing worthy cars of the storied Buick name, and in the future the competitors are going to have a tough time outrunning the GS.