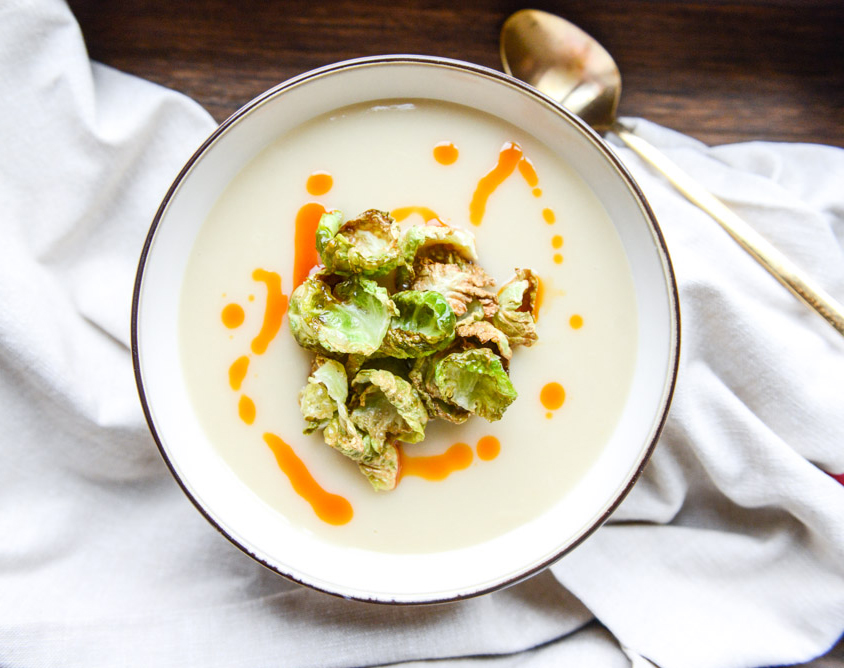 Back in 2010 Chris Voigt, executive director of the Washington State Potato Commission, has pledged to eat nothing but potatoes for two months. Two months of the little spuds with no toppings, no sides. To meet the necessary goals without impacting his caloric intake, he had to up to 20 potatoes a day. Can you imagine how tired of potatoes he was at the end of it?

Why do we share this? Well, potatoes are a great gift from Mother Nature because of the multitude of purposes they can serve. They are packed with nutrients and, when prepared properly, delicious. They are adaptable to almost every method of cooking, not to mention they’re super cheap, so it’s easy to feed yourself well on a budget. They’re also excellent as a thickener in soup, especially when you’re avoiding dairy products.

I love to eat soup as a whole meal and I really try to maintain a balanced diet (try being the operative word here), so I like to keep cream and milk out of my soup recipes. This is where taters really show their worth.

In the past, I’ve used cream cheese to make a baked potato soup and although it was incredibly delicious, it came out basically the texture of mashed potatoes and had essentially zero beneficial nutrients. This time I wanted to do a vegetable based soup and completely leave out the milk products.

I’m currently on a huge Brussels sprouts kick, and I’ve found they’re magical when paired with leeks, so I figured okay, let’s throw in potatoes too and see what happens. Good news- it’s great!

Start with your leeks. Like celery, you’re only going to use the stalk part of the leek, so cut off the dark greens at the end so you’re left with a big chunk of mostly white and maybe a little light green. Slice as thin as you can, and if it’s a big stalk, cut it in half lengthwise first so you end up with little strips rather than circular pieces. These unassuming, crunchy dudes pack a nice little punch that brightens up the earthy flavor of the sprouts.

Toss these into a big heavy-bottomed pot. Similarly, we’re going for small pieces of the sprouts, so chop off the ends and halve them. Go for quarters if they’re big ol’ Brussels.

Now, for the taters. I used russets because they’re pretty starchy so they’ll provide that nice, creamy texture, but you could experiment with sweet potatoes or reds. As for as peeling, this is up to you. The peels may not blend up very well but it could be a nice textural contrast so try it if you want! Chop into ½ inch cubes. Smash about four cloves of fresh garlic and toss those in too. Don’t worry about chopping them since they’re already small. Fresh garlic is a Brussels sprout’s best friend.

All of these are going into your stockpot with about 4 tbsp of butter (okay, so I left in one dairy product.) You can use olive oil if you want but I think butter is better for softening veggies, which is what we’re going for here.

This part of the recipe is focused more on getting the produce to a tender stage, and you’re looking for caramelization, especially on the leeks and brussels sprouts. Make sure to liberally salt the veggies while they’re in the pot, as salt helps to release moisture especially in dense vegetables like these.

You’ll be blending everything together at the end, so don’t worry if there are some extra crispy pieces. These are going to add great flavor 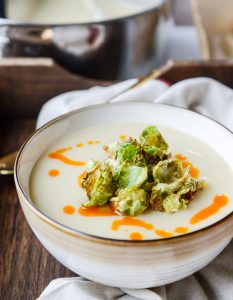 Let everything sauté for about 10-15 minutes, making sure to constantly stir. Once the potatoes start to fall apart and the sprouts and leeks look a little crispy and brown, add in your stock. I went with vegetable but chicken stock will be great too. You want the liquid to completely cover the vegetables by at least an inch.

Keep the heat on low, cover the pot, and let everything cook for 30-45 minutes. Taste as it cooks and add salt when necessary.

Salt in every stage for better depth of flavor, rather than just salting at the end.

The potatoes should be completely soft and mashable so you can properly blend. This can be done with a handheld immersion blender (my personal favorite) or in batches in a regular blender. Be careful either way as hot soup doesn’t feel so great when splattered on human skin.

You can blend fully so the soup is completely liquid, or you can keep it slightly chunky if that’s what you’re into. Top with some fried leeks and sprouts, maybe some parmesan cheese, or some bacon, and there you go! A tasty, super simple, and fairly healthful meal that shows not only the diversity of the spud, but is incredibly delicious and something we thing Chris Voigt would love to try.