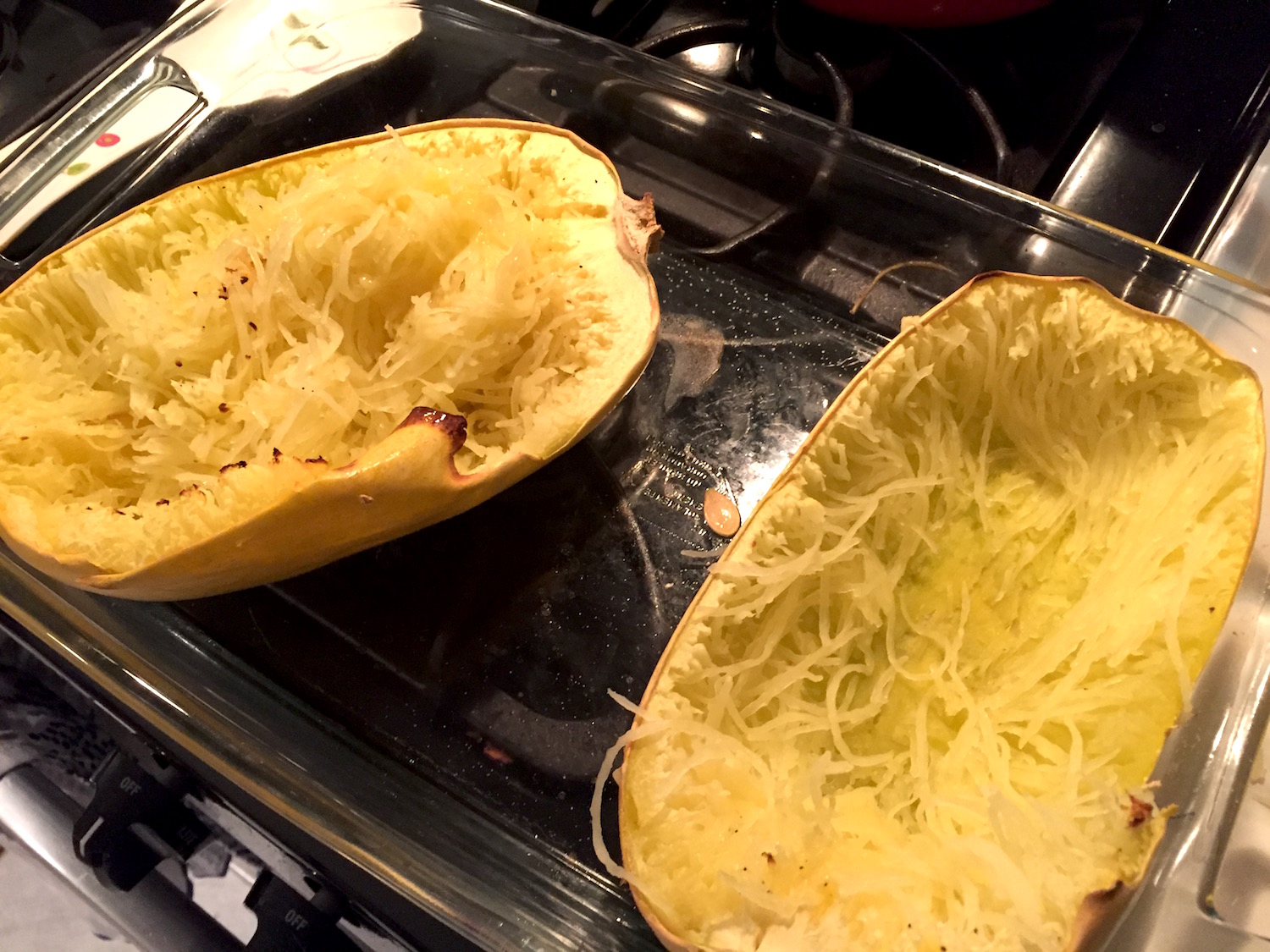 There, I’ve said it. I’m like Michael Phelps in the way that I incorporate pasta into my everyday diet, except the problem is I’m not an Olympic swimmer and my metabolism doesn’t really appreciate it (not that I really listen to my metabolism but I should probably start sometime, right?) Anyway, a while back someone told me about spaghetti squash as a substitute for pasta. At first, I giggled and ignored them because, let’s be real, there is no actual substitute for a bowl full of noodles. But then I tried it, and I have to say, for being a “healthy alternative,” it’s pretty good!

The thing about most squash, in general, is that they’re more about texture than flavor, with most of them just having a slight earthy taste about them but not much more. The cool part about spaghetti squash is that it actually looks like spaghetti! Not to mention they’re huge and totally inexpensive so they make for excellent meal prep.

Find yourself a pretty yellow spaghetti squash- the lighter the outside rind, the tougher your squash strands will be.

Stab it a bunch with a fork (like you would a potato) and pop that baby in the microwave for five minutes. This softens up the rind so you can cut into it. 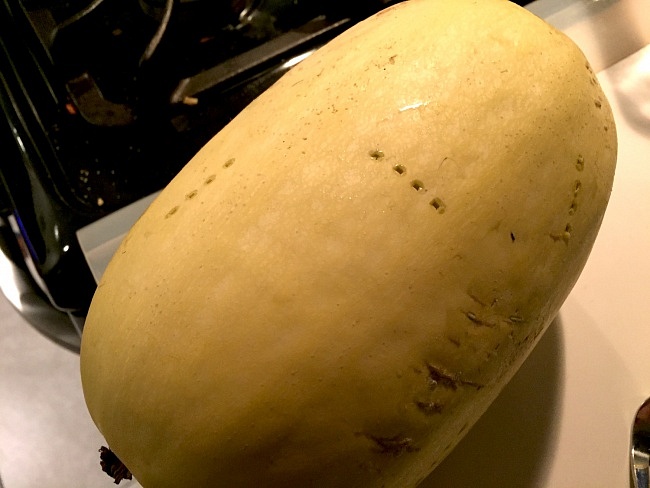 It’s going to spew a little water out of your fork holes so use caution when removing it from the microwave. Find the largest knife you have and set to work slicing it in half, hot dog style. Now, I’m kind of short so I have a really hard time cutting these things in a pretty line. It doesn’t really matter anyway, as long as the sides are somewhat even.

Drizzle with olive oil, sprinkle with salt and pepper, place face up in an oven safe dish and place in the oven for about 30 minutes. You’ll see the top get darker and some of the top strands even get a little burnt, so this is how you’ll know it’s done. 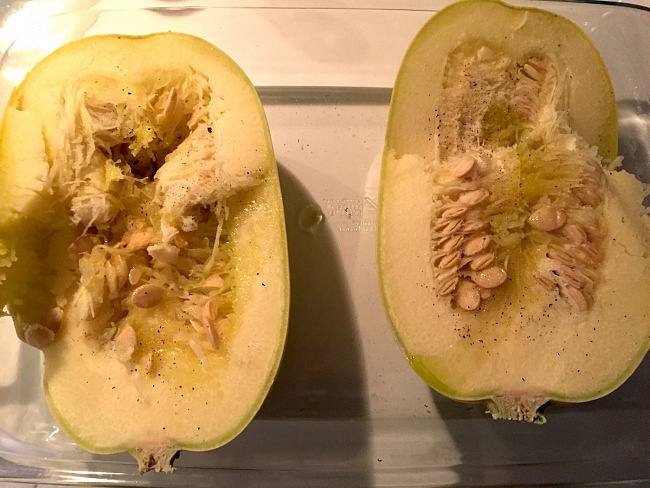 Carefully pull it out of the oven and with tongs and a fork, or two forks, begin to scoop out the seeds. You’ll notice it’s similar to scooping out a pumpkin except it’s less slimy, and instead of the hard interior like a pumpkin, it comes out like…spaghetti! (Cue scared face emoji)

After you’ve scooped out the seeds, take your two forks and start pulling the strands away from the sides of the squash rinds. It should shred very easily as if you were shredding a pot roast. If it doesn’t, and the inside still feels tough, pop it back in the oven for another 5-10 minutes. 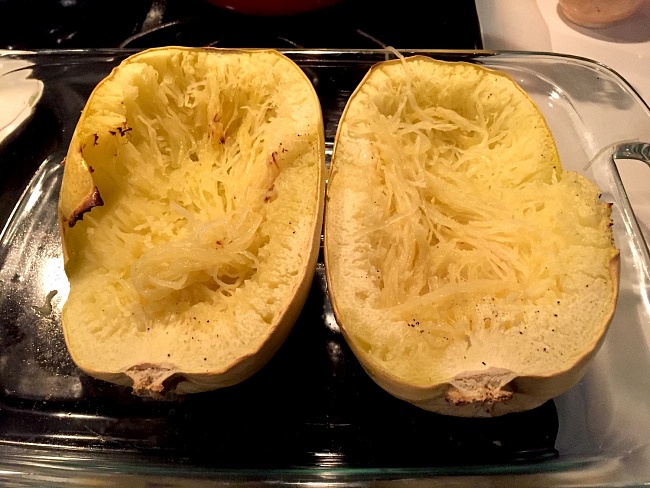 Repeat the shredding process until you’ve emptied your squash halves of their insides. Now, you should have a giant mound of vegetable spaghetti! Obviously, there are endless possibilities for this stuff. You can treat it exactly like you would a bowl of pasta, and cover it with sauce, veggies, and cheese. It also has a similar quality to a potato, so you can top it like you would a hot baked potato, with cheese and bacon. The best part is that no matter what you top it with, it’s healthier than both of those options! Which basically means you can eat more of it, so go to town! 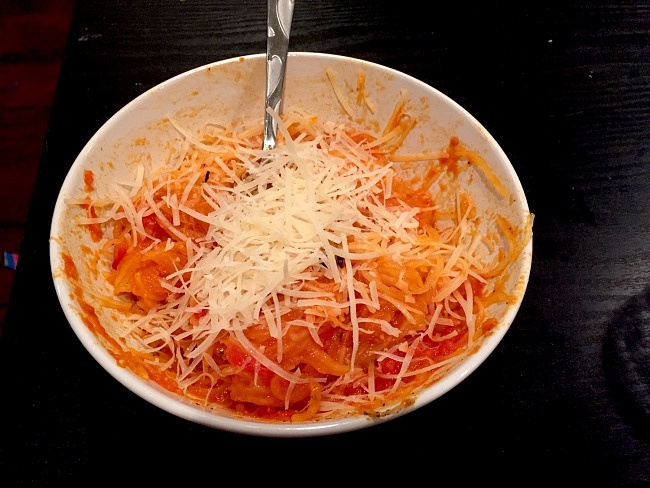