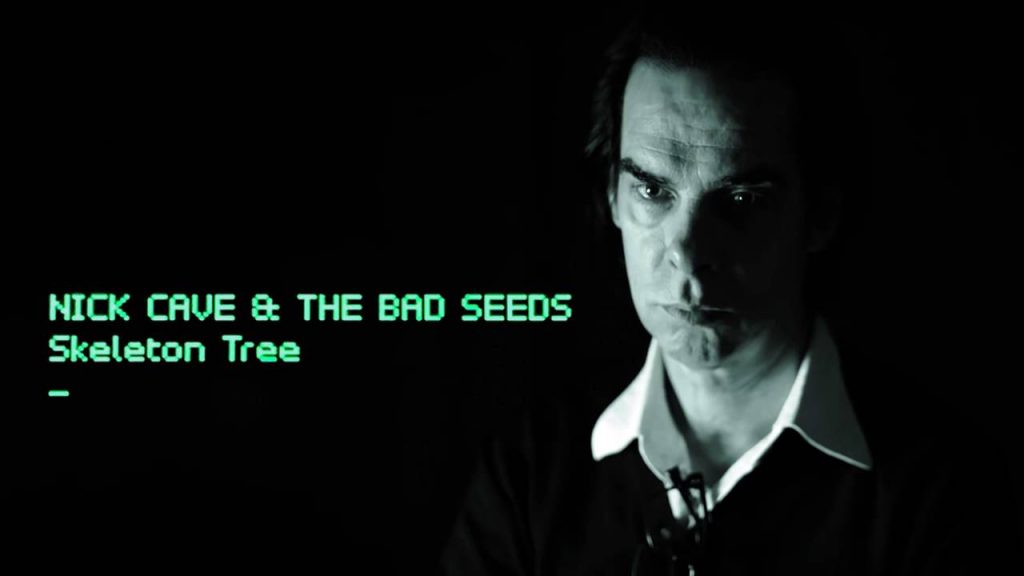 How does the artist continue in life after tragedy? Does the work seem more or less important in it’s wake? Nick Cave faces these existential questions on his newest album with the Bad Seeds Skeleton Tree. This is mature music. This is grief recorded straight to tape.

“What is truly inspiring about the album is that he manages to process this depth of sadness without giving into despair or self-pity. In a certain sense this is the most life-affirming work that he and the Bad Seeds have done in their 30 year-plus history.”

Cave experienced the horror of losing a son in the summer of 2015 and Skeleton Tree is a direct engagement with the realities of loss in this life. What is truly inspiring about the album is that he manages to process this depth of sadness without giving into despair or self-pity. In a certain sense this is the most life-affirming work that he and the Bad Seeds have done in their 30 year-plus history.

In this LP we see the band continuing in the ambient minimalism of previous album closer “Push the Sky Away”. These are more soundscapes than full-blown, structured pop/rock songs. Throughout their career the Bad Seeds have gone between chaotic rock n’ roll and their unique takes on gentle piano ballads. Skeleton Tree doesn’t have either of those. These are songs performed in the midst of mourning and everything about the production, vocals, musical accompaniment and lyrics follow suit. This is another masterpiece from the now legendary band.

I go back to my initial question: what does the artist do in the wake of tragic loss? Nick Cave has long been the kind of creator that combines discipline and intuition. He speaks with genuine mystery and reverence about his muse. At times he has written about this directly in his songs. One of my favorite lines that shows his own humility in the creative process is found in “There She Goes, My Beautiful World”:

“So if you got a trumpet, get on your feet,
brother, and blow it
If you’ve got a field, that don’t yield,
well get up and hoe it
I look at you and you look at me and
deep in our we hearts know it
That you aren’t much of a muse,
but then again I’m not much of a poet”

He is the kind of artist that treats his writing with the discipline of specific work hours and habitual practices. He literally goes to an office Monday-Friday. The death of a loved one puts a full stop to the routines and norms of daily life. In the trauma of loss all of life seems to be suspended. Cave directly confronts this idea about event and how to continue after radical change in the trailer to the film One More Time With Feeling that accompanies the new album. He says this about the difficulty of transformation after tragedy:

“What comes out in Skeleton Tree is a direct, radical confrontation with loss itself. In this way Cave reminds me again that art is one of the supreme gifts in all of life but also a courageous act that requires bold vulnerability.”

“Most of us don’t want to change really. I mean why should we? What we do want is, sort of, modifications on the original model. We keep on being ourselves but, hopefully, better versions of ourselves. But what happens when an event occurs that is so catastrophic that you just change? You change from the known person to an unknown person. So that when you look at yourself in the mirror do you recognize the person that you were? But the person inside the skin is a different person.”

Nick Cave has gone through several of these kinds of changes in his life: as the crazed front-man of The Birthday Party, heroin addicted artist in Berlin with the Bad Seeds and “mature” renassiance man of recent years. And there he was doing his 9-5 work engaged in the creative life and as devoted husband and father. Suddenly, out of nowhere, the absurd loss takes place. I wondered myself what would come next from him. Would he directly confront this or process it in a less obvious way? No one would have faulted him for hiding these inner workings from the outside world.

What comes out in Skeleton Tree is a direct, radical confrontation with loss itself. In this way Cave reminds me again that art is one of the supreme gifts in all of life but also a courageous act that requires bold vulnerability. There are examples of this kind of painful openness in songs like John Lennon’s “Mother”, Earl Sweatshirt’s “Grief” and Joni Mitchel’s “River”. You can’t be a weak person and share things like that with the world. Genuine art takes guts.

The gift we get in the creations of others is a shared experience of life. When someone like Nick Cave is bold enough to share his grief with an audience we are given the gift of processing loss that we know in our own lives.

On the stunning “I Need You” Cave sings:

He may be singing about his wife, his family, his friends, his departed son, God, his art or life itself. I am reminded, something I never really seem to forget, that I need art. I am so thankful for those that are brave enough to share their inspiration with the world. Nick Cave transcends musical trends and “coolness” on Skeleton Tree; this is the real stuff of life with all of it’s glory and pain.