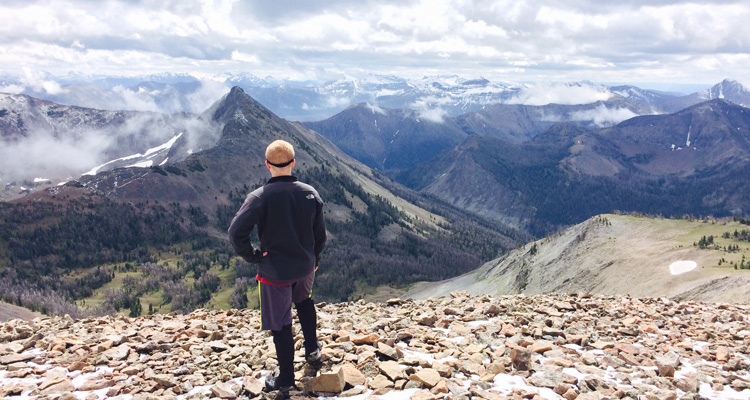 I was born on Tuesday September 13th, 1988 (while Yellowstone National Park was up in flames) and although I’ve traveled the globe since birth, I’ve never been camping until August 24th, 2014. Every person who hears me say that seems to respond with something to the effect of, “what the hell’s the matter with you?” And while I still may get that question a lot, I’ll never again get it in regards to camping thanks to a week spent in Yellowstone with two life-long friends, David and Shawn.

My alarm clock sounds off at 3:30AM, just as I wanted it. I woke up after an hour of sleep. The evening before was David’s annual family party, LobsterFest 2k14, so I’ll sum up that moment with a quote from the original G-Funk pioneer, Nathaniel Dwayne Hale, we can better relate to:

“Woke up early in the mornin’ man
Runnin’ kinda’ late I gotta’ catch my plane
Feelin’ kinda’ funny from the weed and thangs’
Kinda’ glad I woke up so I can’t complain.”

I ran upstairs and guzzled water as the clouds in my mind cleared up and my brain rebooted. I knew I had a long journey ahead of me. I grabbed my Puma gym sack and double-checked to make sure I had everything I needed to carry on the plane. The rest of our supplies were already packed in Shawn’s car we were taking to the airport in Burlington, Vermont. I ran outside in the pitch black to see David and Shawn already at the car, looking through their luggage one last time before driving to the airport. Satisfied, we hopped in the car and were off.

Our connection flight from Burlington to Chicago to Bozeman, Montana is a sleep-deprived, hungover blur.

Boom. We arrive in Bozeman at 10:30AM, local time. We hustled to the car rental booths and picked up a 2013 Subaru Outback for the week, shoved our bags in it and started our 2-hour drive to Yellowstone. Along the way we stopped at a grocery store and stocked our cooler full of food (and beer) to last the week.

Upon arriving at Yellowstone vehicles have to drive through an entrance gate that is hauntingly similar to driving through customs at the Canadian border. The entrance fee for a week is $25 per car, or $50 for the whole year, which is super cheap. Just remember to keep your pass in the glove box if you want to leave the park or else they’ll make you pay again to come back in (which we learned the hard way). We paid, entered and felt victorious and ecstatic that the commute was over and we were finally in the park. Immediately after entering, we see bison along the road. 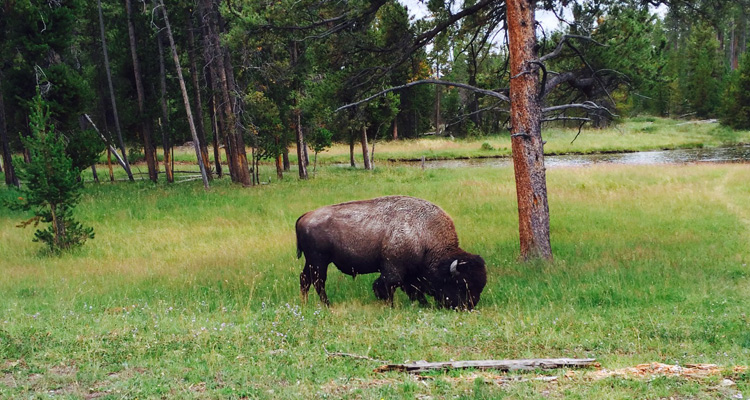 We stop to get a closer look at the bison then continue to Bridge Bay to pitch our Kelty tent, set up our supplies and cook a quick meal over a fire before exploring the area. Once we ate and packed a lunch, we set out for the remainder of the day to see otherworldly geysers and water basins of boiling hot water. (Yellowstone sits on top of North America’s largest supervolcano, waiting to erupt at any moment.) If you think geysers and water basins are boring, check them out at Yellowstone and think again. Entering Yellowstone park is like landing on an alien planet. 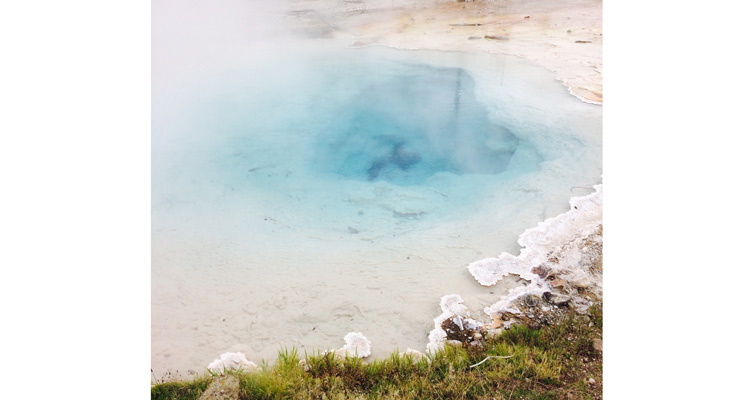 When dusk hit, we hurried back to the tent, made a fire with our Zippo Outdoor gear and cooked a pretty basic meal of chicken, potatoes and onions.

We wake up early, cook eggs and bacon over the fire, and pack a lunch for the day ahead. 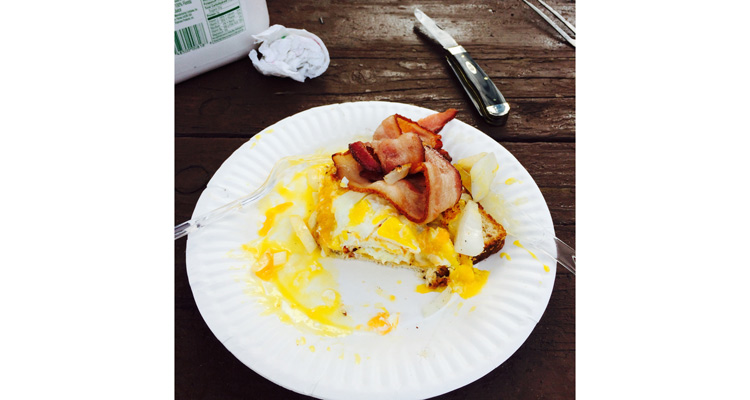 We dressed for the weather and packed our bags with Case hunting knives and Frontiersman Bear Attack Deterrent, ready to explore the summit at over 10,000 feet known as Avalanche Peak. Of course, on our way to Avalanche Peak, we see wildlife along the road – this time they aren’t bison, they’re very massive elk. 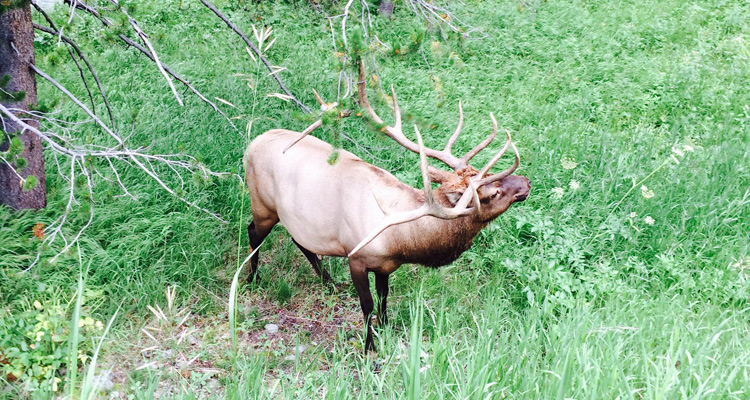 Once we arrive at the trail head, we hiked the 2.5-mile trail and soaked in all the glory at the summit. The strangest thing about standing at the top of that mountain is how thin the air is. At such high elevation, the oxygen level is lower than normal, so we all felt very light-headed and a little nauseous, but we sort of got used to it as the view overpowered any uneasy feelings.

After taking in the view and documenting it with our GoPro HERO3+ Black Edition, we snapped back to reality and hurried down the mountain to continue exploring the land of Yellowstone. Next stop: Old Faithful. On our way there, we had really high hopes. It’s such a familiar name and just about all the images you see on a Google search make it out to be a geyser that jets a stream of water 150 feet in the air. Unfortunately, though, we arrived to see a weak cloud of steam pathetically rolling out of a sorry excuse for a pit in the Earth’s crust. 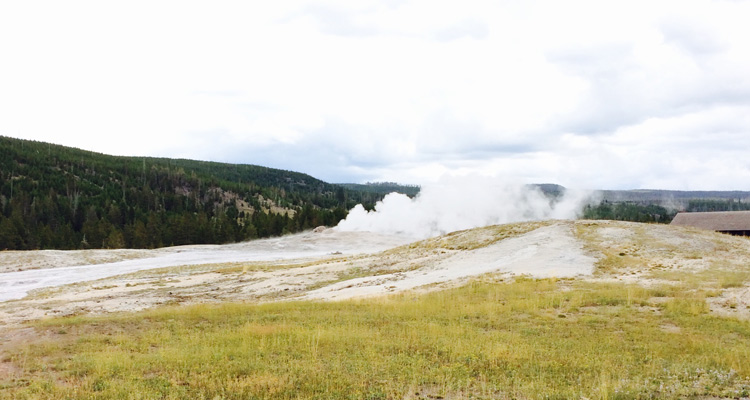 Old Faithful was a flop, so we promptly left to see the Grand Prismatic Spring, which is the largest hot spring in the United States. It’s a giant water basin of scalding hot water and what’s truly amazing about it is the color – the water in the center is sky blue with an outer ring of turquoise, and a second ring of yellow, then orange and red. It’s easy to see from above, but we could only see it from the walkway next to it, but it’s still impressive. 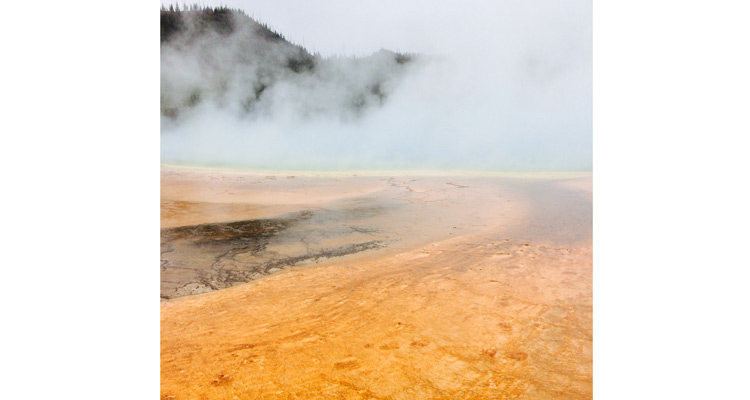 We spent the rest of the day gathering dry wood to make fires for food. And for those who would rather not hunt and gather wood, there are a few small shops in Yellowstone that will sell small bundles of firewood for $8 each.

We packed up the tent and all the supplies. It was time to find a new campground and we decided to explore Grand Teton National Park. It’s located right outside Yellowstone. On the way there we stopped at a small, yet famous, waterfall known as Lewis Falls. 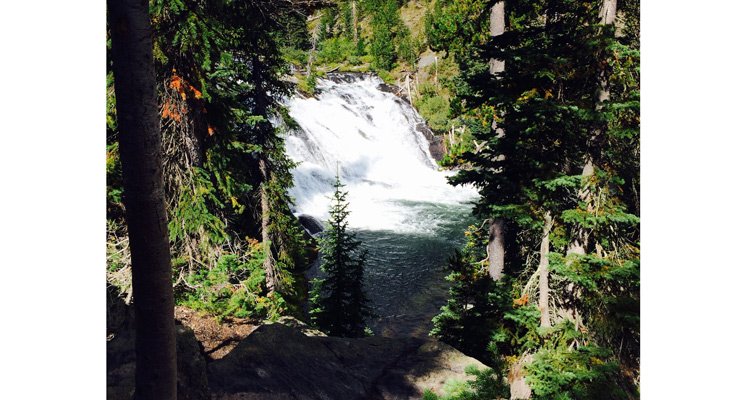 Then we finally arrived at our new location to pitch the tent and settle in for a couple nights: Jenny Lake. If I can recommend anywhere to camp in Grand Teton, I would have to say Jenny Lake. Being there is really inspiring in itself. We chose a secluded area near the lake, made a fire and pitched the tent so that everything would be ready before dark. 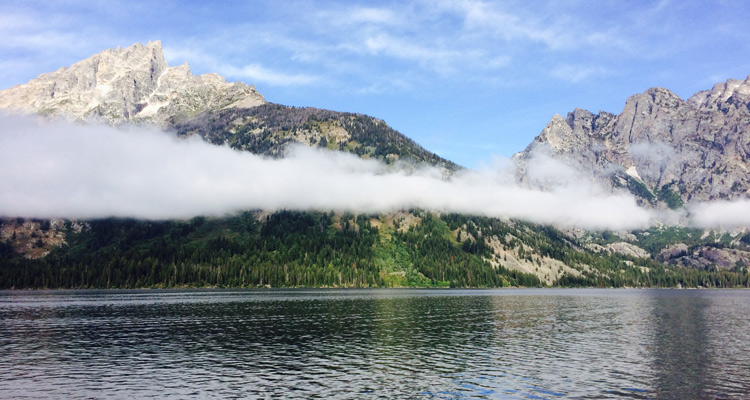 With everything setup we decided to visit a small western community called Moose in Wyoming we had heard about. It’s very close to the campground and we spotted restaurant called The Pizza Pasta Company in a resort known as Dornans. It’s a really cool spot for a [relatively] cheap pitcher of local beer and great food. (Might I recommend the Nachos? It has bison in it.) And you can sit on the roof of the restaurant for an amazing view of the mountain range. With our bellies content with nourishment and our minds boozed-up we headed back to the campground to prepare for the night ahead. Did I mention how beautiful and inspiring Jenny Lake is? 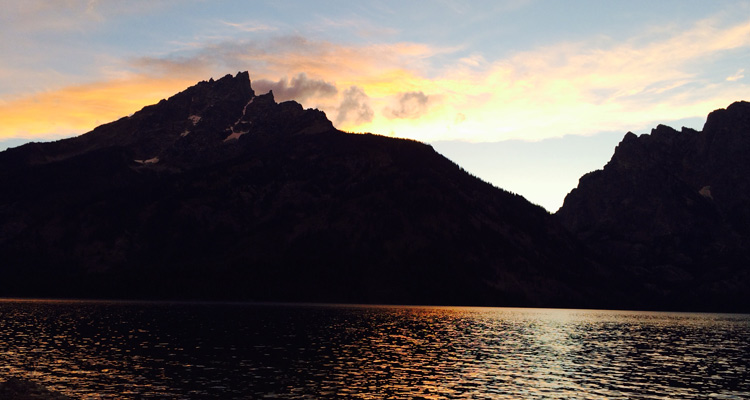 We wake up, rush to make a fire, gobble down breakfast, pack our bags and set out to explore the mountain trails. After glancing at a map we decided to trek our way up to Inspiration Point, which is on a mountain by Jenny Lake. Immediately upon leaving we spot deer that have absolutely no fear of humans whatsoever. 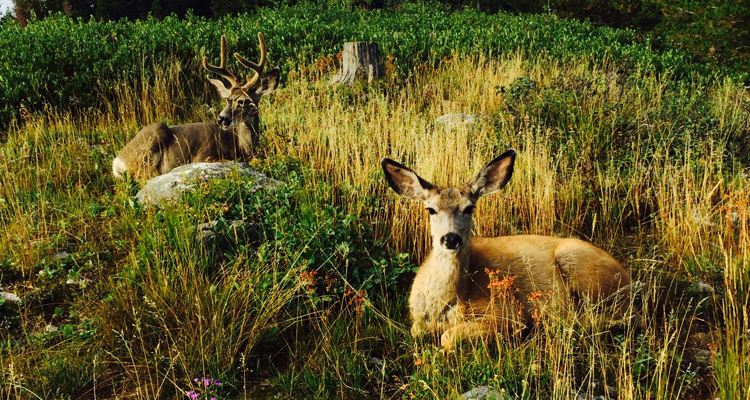 We begin the hike. 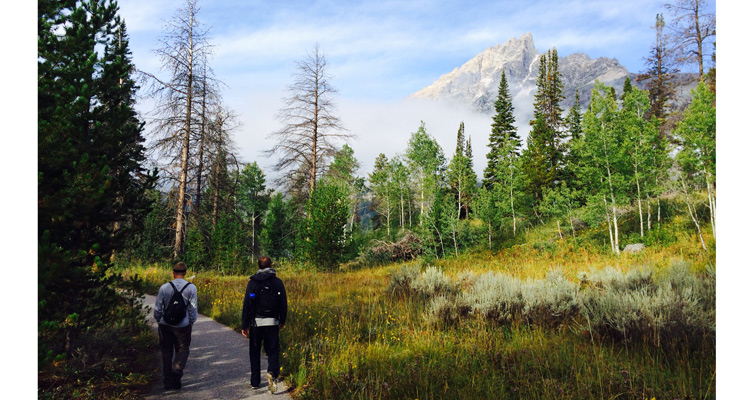 On the way up we see a rocky slope covered with dozens of Pika. Soon after we come across a waterfall. 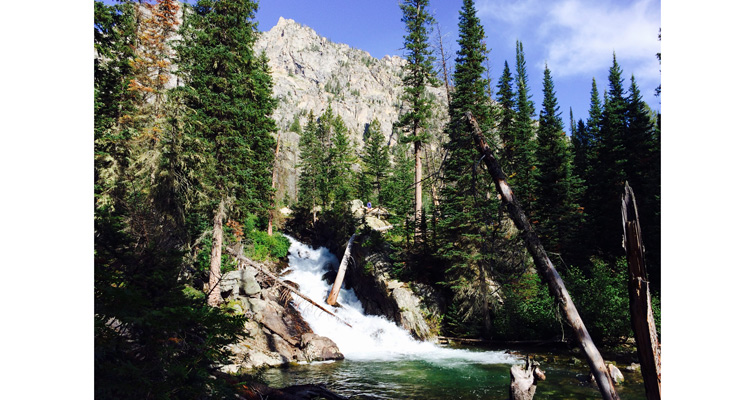 And then another waterfall… 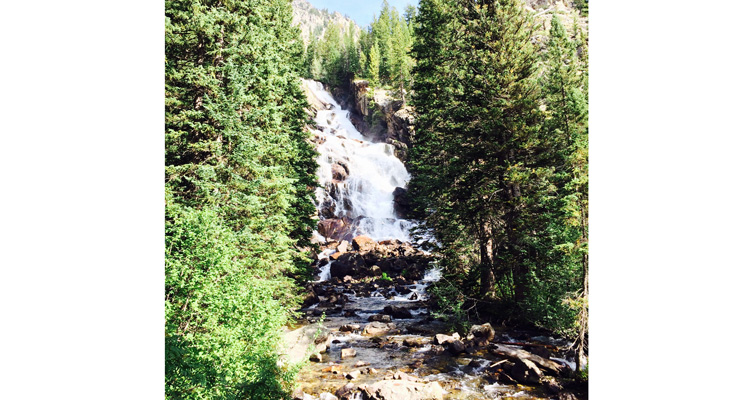 After about an hour we finally reach Inspiration Point, and although the view is gorgeous, I expected more from the grandeur of its name. 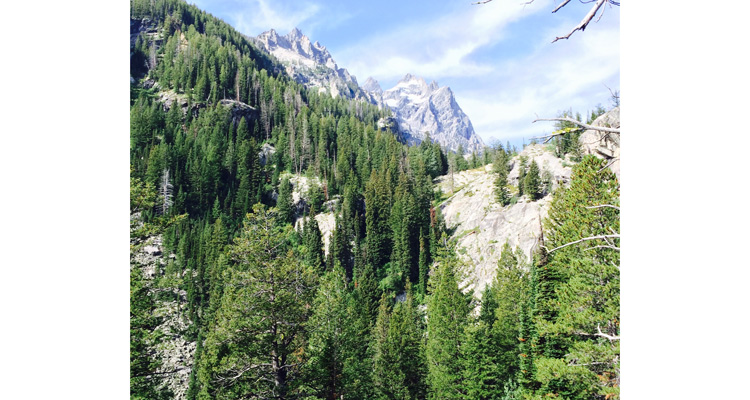 After resting at the top of Inspiration Point, we started our trek back down the mountain, only this time our good friend David was in a reckless state-of-mind and skipped the designated trail. Instead, he decided to scale the mountainside and beeline directly to the bottom. Just remember that this land has been virtually untouched by humans so the mountain is steep, rocky and super dangerous (to say the least). Nonetheless, Shawn and I foolishly followed suit without any rock-climbing equipment and worn-out sneakers.

However, toward the bottom of the mountain we were rewarded with a close-up encounter with a massive moose, so the perilous hike straight down suddenly seemed worth the risk… 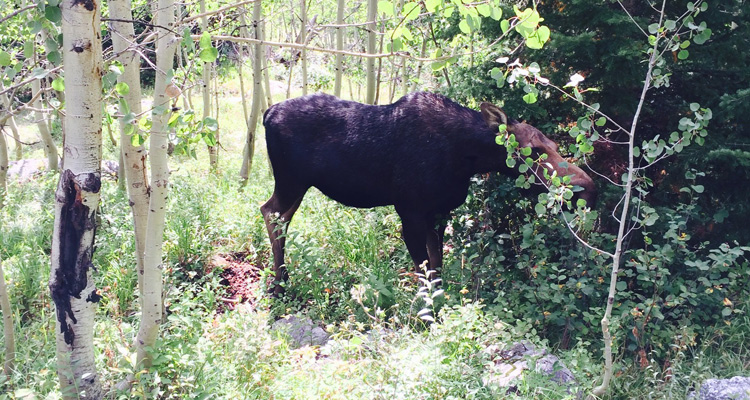 After thanking the Ancient Aliens for keeping the moose from trampling me, we hurried back to the tent to pack our bags for an adventure to the very small town of Jackson Hole to go rafting down Snake River. Our specific destination: Teton Whitewater. This is a place where they take groups of people on guiding rafting tours down Snake River, and we loved it. The staff there is super friendly and informative. After the hour-long raft journey down the river, we asked where we could eat great food in Jackson Hole and they recommended we try (very surprisingly) Thai food. Apparently Thai food is one of the most popular dishes in Jackson Hole, so we went to the most reputable restaurant appropriately named Thai Plate. The pad Thai is amazing and the price is right. If you’re ever in the Jackson Hole area, this restaurant is a must – and it’s BYOB!

We ended the night by building a fire, reclining our Kelty camping chairs all the way back, and staring at the stars. Maybe it’s because the high elevation, but for some reason the stars out there look bigger and brighter than I’ve ever seen. And there seems to be A LOT more stars out. We heard that Jenny Lake is one of the best places in the country to star gaze.