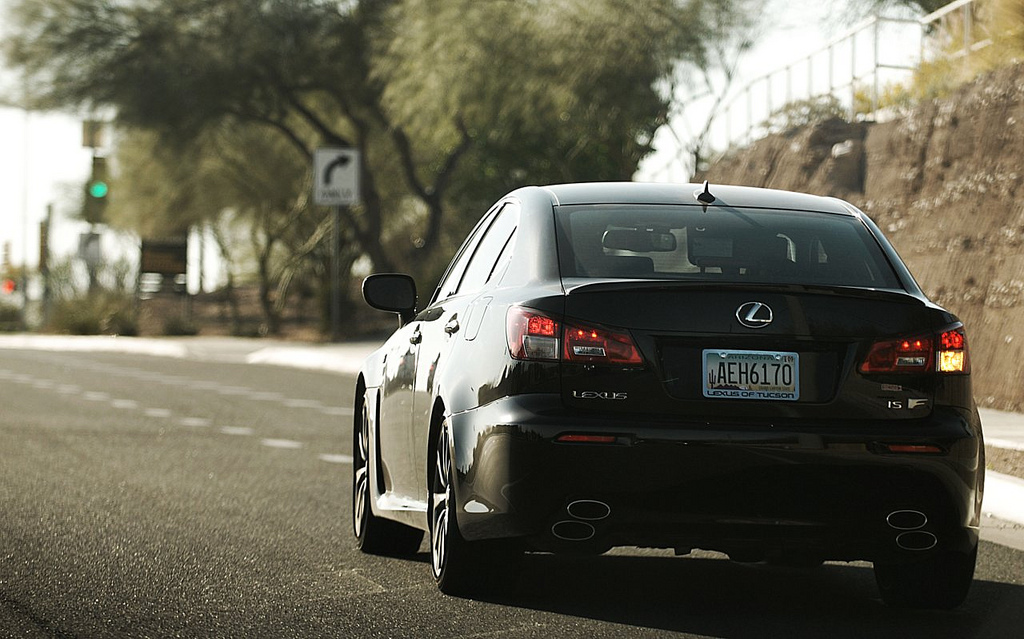 An Ode to the Dragon

That was my initial thought really, as I opened the door to the 2014 Lexus IS-F.  I’ve always enjoyed the Lexus vehicles, but have never really thought they were something to write home about.  Classy, comfortable, semi-affordable, and made with strong quality, the rides have always been related to the newly promoted managers and stay-at-home moms to me.  And I wasn’t giving this ride in front of me much more of a thought.  Yes, I knew what it was, what it had inside, and had seen the hilarious Top Gear episode with Clarkson driving it like mad man.  But for some reason I could not look past the Lexus name.

And I am sorry for that.

I am sorry to this car that is more than what I could have ever imagined.  415 hp at my disposal, all pushed through the rear wheels, was insane.  I’ve handled high powered vehicles before, but nothing has invoked the amount of fun that the IS-F did.  Every start-up, every acceleration, every corner – the world had become my race track.  I was finding myself looking for reasons to take new routes home, finding longer roads to stretch the legs on, the really get the full taste of what this car was supposed to deliver.  No car has ever invoked that emotion in me.  It became an adventure, an opportunity to see the confused looks on the faces around me of the people who, like me originally, only saw a Lexus.

And that’s why it saddens me to write this article.  Lexus ended production of this dragon 2 weeks after I had the vehicle.  The moment of reading that news was bittersweet for me.  I felt blessed to have experienced that ride, knowing that if ever an opportunity for me to own a RWD high-power sedan came up, it would be my number one choice.  No questions about that.  But on the other end, I feel cheated, as if Lexus showed the world just what it could do with a sedan, launching the F-Sport branding, but then taking away the true heart and soul.  There is no word if this engine, this mastered piece of Japanese engineering, will return in some form, and that stings.

The moment I started this car, the first hard pull off the light, the cornering with the tires squeaking just as if they were egging me on, was pure bliss.  The noise of the exhaust, bark of the shifts, was like pure adrenaline being pumped into my system.  I became an addict of speed in this car.  Let that sink in.  A Lexus made me fall in love with pure horsepower.

But there was one moment of pure bliss with that car.  My best friend was having his bachelor party that weekend, and I offered to drive him and two others to the many festivities.  As we drove through the empty streets, I looked around and saw the grins on 3 non-motor head faces.  These gentlemen, owners of cars that get them from A to B, were hooked.  Every corner, every acceleration, every bark in the shift made their smile even more permanent.   I felt bad, as if I had just introduced them to a new, addicting drug, but at the same time, welcomed them to the party.

It’s a series of mixed emotions I have with this car.  It’s not practical for me, but that’s only because I live in Colorado.  Any other state, such as Arizona, and I would have this in my garage in a heartbeat.  But as I look around at the other rides on the market, I am not seeing anything that will truly fill this need, this missing part of my addiction to speed.  And every bit of it was caused by a Lexus.  No more was I looking at this as a grocery-getter for the upper middle class.  No longer did Lexus fit in the ‘kind of cool’ category as they have proven they can delivery something that invokes pure motor head emotions.  Now, instead, I wait to hear of the next insane ride that will grace the streets.  And I only hope it exceeds the top-class that the IS-F delivered.

One day,  I will find a way.  I will justify this ride.  I am sorry I ever doubted it.