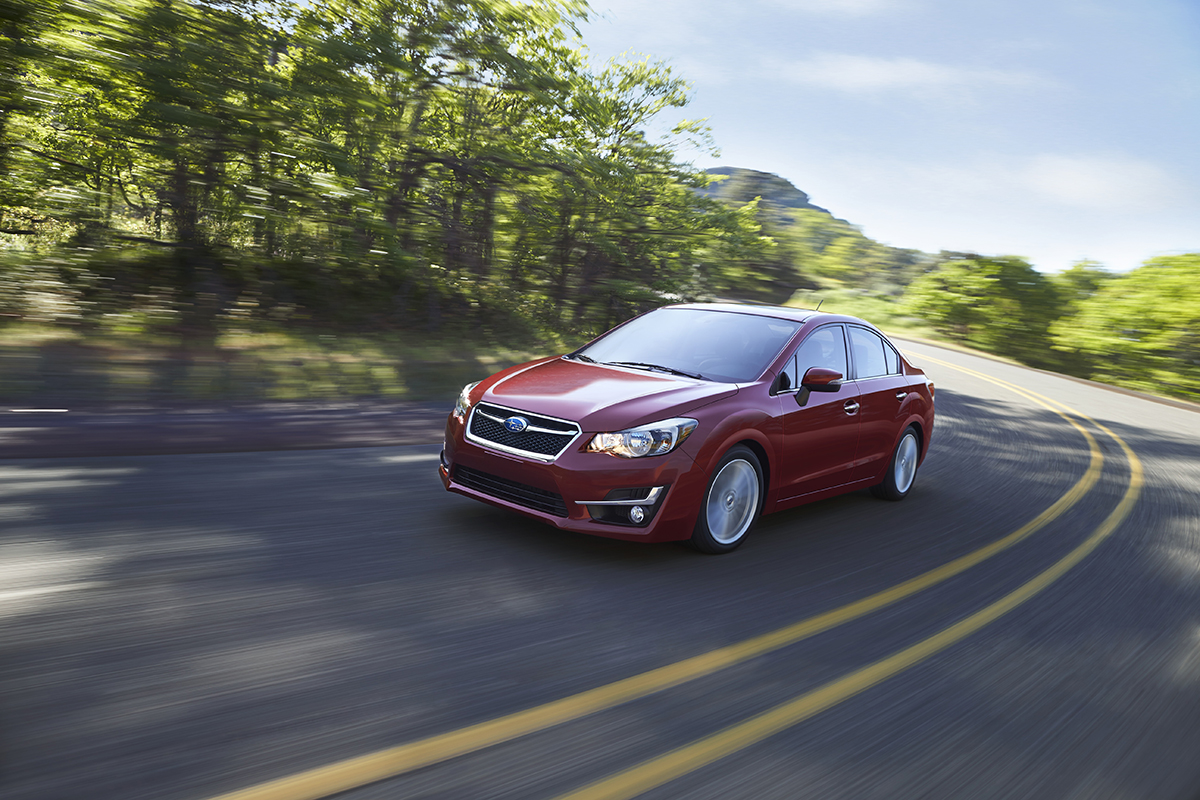 The Impreza is Subaru’s most popular model which sells in quite large figures in the market. It has formed the basis of many other models like the Crosstrek which uses its basic construction. The company introduced the latest 2015 edition of this car making this car even more capable than before by ironing out the irregularities of the previous generation model., while bringing in some great updates bringing the vehicle to a better level of value for money.

The Impreza always followed a simple style theme and the latest update has tweaked things up a bit by making the car look more elegant by providing properly positioned clean creases. The car is available in both hatchback as well as sedan configuration. Up front the large trapezoidal grill looks very prominent which is flanked by nice sleek headlamps which gives the car a sharp look. The profile view is kept very simple and there is no details except for the shoulder crease running its length. The rear section is also kept very clean by providing compact tail lamps which look neat and compliment the car’s elegant looks. Although the car does not pose any striking design features, but it certainly does very neat and impart a sense of elegance in its nature.

Subaru has paid great attention to improve the customer experience and that is depicted by the refreshed interiors which is way better than the previous generation model. The dual tone black and beige interiors combine sportiness and classic appeal into a single entity. Although the cabin quality cannot be called luxurious, but Subaru has given the interiors a very up market feel by using high quality materials and soft touch plastics. Space was never a problem in Impreza, and the car continues to keep its occupants in utter comfort by providing good headroom and legroom. Even at 6ft 2in, I found that I had plenty of headroom, especially when compared to the previous generation.

The central console features a 6.2 inches touch screen infotainment display which is surrounded by the regular control switches. The dashboard bears a purposeful look and the numbers of dials and buttons are kept to a minimum to give the dashboard a clean look. A big upgrade from the previous generation. the ease of use of this new dash is improved, with most of the buttons very intuitive and out of the way while driving.

There is still some engine noise and vibration seeping into the cabin, but apart from that the overall cabin quality is top notch. A 2.0 liter 4 cylinder powers this car and produces 148 horsepower and 145 foot pound of torque. The engine cannot be termed as sporty as it lacks on the power front, but it still handles the hills of the Rockies just fine and highway speeds are easily reached. The power is transferred to the all wheel drive system by either a 5 speed manual transmission or a CVT. The CVT is tuned to churn out maximum fuel efficiency from the engine which it does very nicely and the car returns an average of 34 miles per gallon, which is pretty impressive even at our mile high altitude. It takes its own sweet time to gather speed, but has enough power for maintaining its momentum on the highway.

The ride quality and driving dynamics stay true to the Subaru legacy and the car handles very well around bends and the brake system is effective to impart confidence in its driver to stop the car immediately.

The car with a decent feature list as it includes Bluetooth connectivity, touch screen infotainment module, iPod connectivity, USB ports, cruise control, rear view camera etc. Although the car is not loaded with features, it scores pretty well by providing essential features to the driver. The car is equipped with many modern safety features which are usually found in higher segment cars such as adaptive cruise control, camera monitored lane assist, pre collision braking system and 7 airbags to provide complete safety to its occupants.

The Subaru Impreza has always been a good car, and this latest iteration has increased its appeal by several notches. It has improved its cabin quality while maintaining its good driving dynamics. All these improvements makes it a very capable contender in the sub 30,000 USD segment.