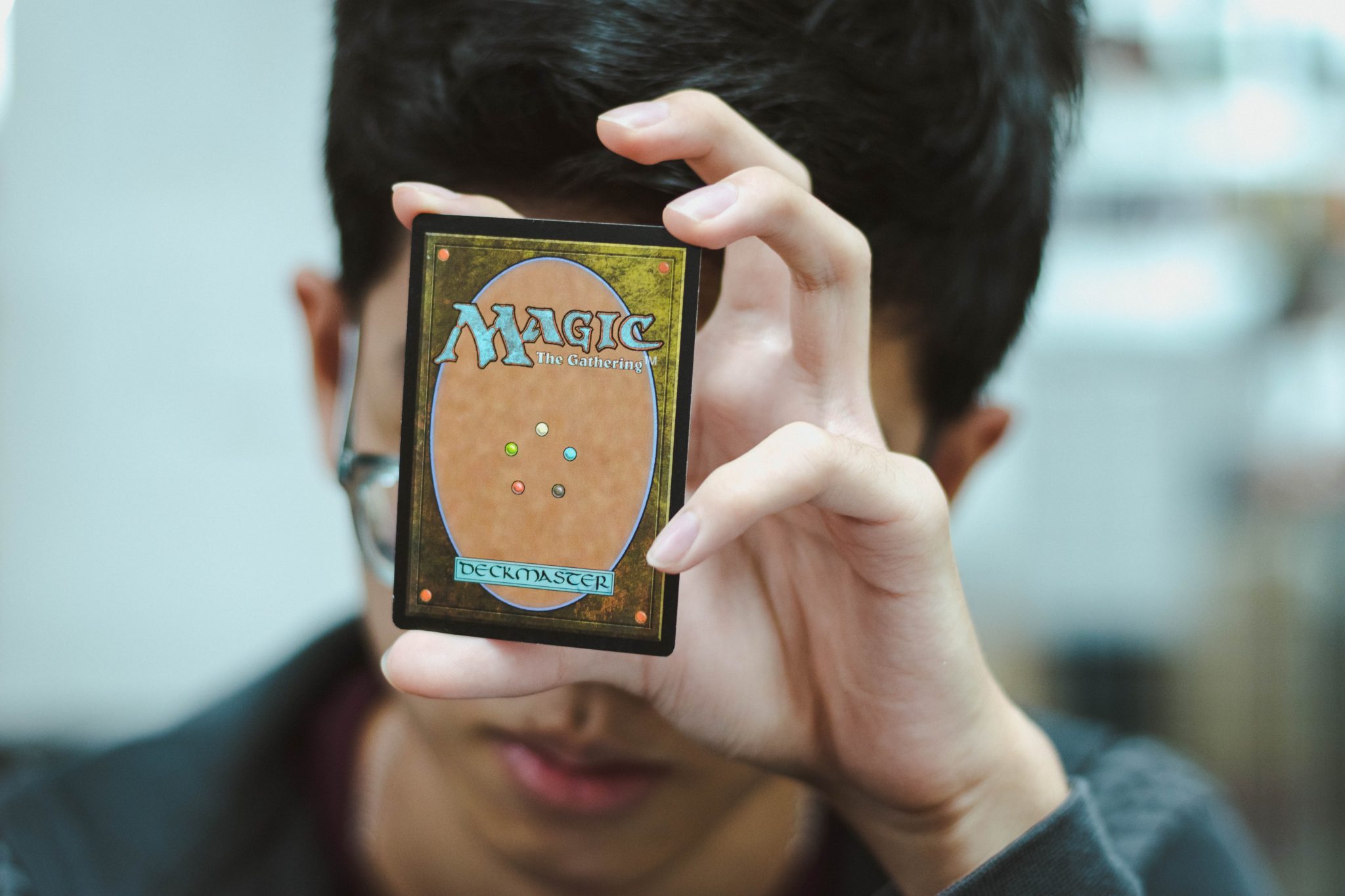 There are so many great gifts for Magic players out there that it’s hard to know where to start. Here’s a list of some things I’ve either seen or own and would recommend. Also, a couple of the items on this list veer into “inside nerd joke” territory, but please don’t let that stop you from giving them to the Magic player(s) in your life. Chances are they will only appreciate the humor behind it all if they’ve already been indoctrinated into the culture, but that’s okay. It’ll be our little secret.

Dice play an important role in Magic games as they determine who goes first, but they also bring that intangible quality known as luck into the mix. And nothing says “I think you’re lucky” like a nice shiny D20 die sitting on the card table next to your favorite card player’s elbow. If you want to up the ante a little, there are also coin-flipping dice and even a die that looks like a 20-sided but is a percentile die. Also,  if you happen to play Dungeons and Dragons, this is one of those rare occasions when it might be appropriate to bring up your character.

Custom card sleeves with their name on them

When it comes to card sleeves, variety is the spice of life – so much so that it’s probably worth mentioning that not all card sleeves are created equal. Thanks to advances in printing technology, card sleeves manufacturers are now able to print full-color images onto clear plastic card sheets before cutting and folding them into card-shaped rectangles. It’s quite impressive if you’ve never seen it before, but I digress. The point is that having personalized card sleeves made is an easy way to show your loved ones how much you appreciate them.

There are some websites (like this one) that specialize in articles covering the game of Magic: The Gathering; but if your special someone also makes use of other major MTG news sites like Star City Games, Channel Fireball, or Hipsters of the Coast then why not make their life more convenient by sending them an annual subscription? You might even consider picking up two subscriptions (one for yourself and one for your significant other) so you can both enjoy all of the great content on these sites without having to worry about whether or not you’ve got enough money to do so.

Magic T-shirt (or hoodie) with artwork from their favorite card

Because the Magic: The Gathering logo is so recognizable, finding a T-shirt or hoodie for any one of the five colors (red, black, green, white, and blue) should be pretty easy. Of course, if they happen to play a different color then you’ll have to do some extra searching. Also, there are legendary creatures from the game that also make great inspiration for shirts like Sliver Queen or even Oloro Ageless Ascetic. You can also go on and make a customized T-shirt or a hoodie with the theme of their favorite card printed on it. This is now something that they can wear into a casual tournament and it also shows that you know their style.

A book about the history of their favorite card

It’s always nice to know how much you’re appreciated, and this is one gift idea that will leave the MTG player in your life feeling special. There are numerous books about the history of MTG, but there is something particularly charming about a book written by someone who not only appreciates and admires their favorite Magic card but can also communicate why it has such a special place in their heart. Plus it’ll allow them to tell you all about why their card means so much to them so be sure to let them take over when they see the book come out of the wrapping paper.

For some reason, this idea seems to be more popular among girls than boys… but it’s a great gift that shows your partner just how much you care about them. This can be made in one of two ways – either pull an image from online and then have them printed onto standard Magic: The Gathering tokens or pay for someone to create a custom Magic card featuring the drawing/picture framed by official MTG borders & text boxes. It may seem silly but be assured that they’ll remember you every time they read the text.

Magic The Gathering players are a special breed of people who deserve to be appreciated especially. If you’re thinking about getting them something for the holidays or a birthday, then hopefully this list has given you some great ideas on what they’ll love the most.