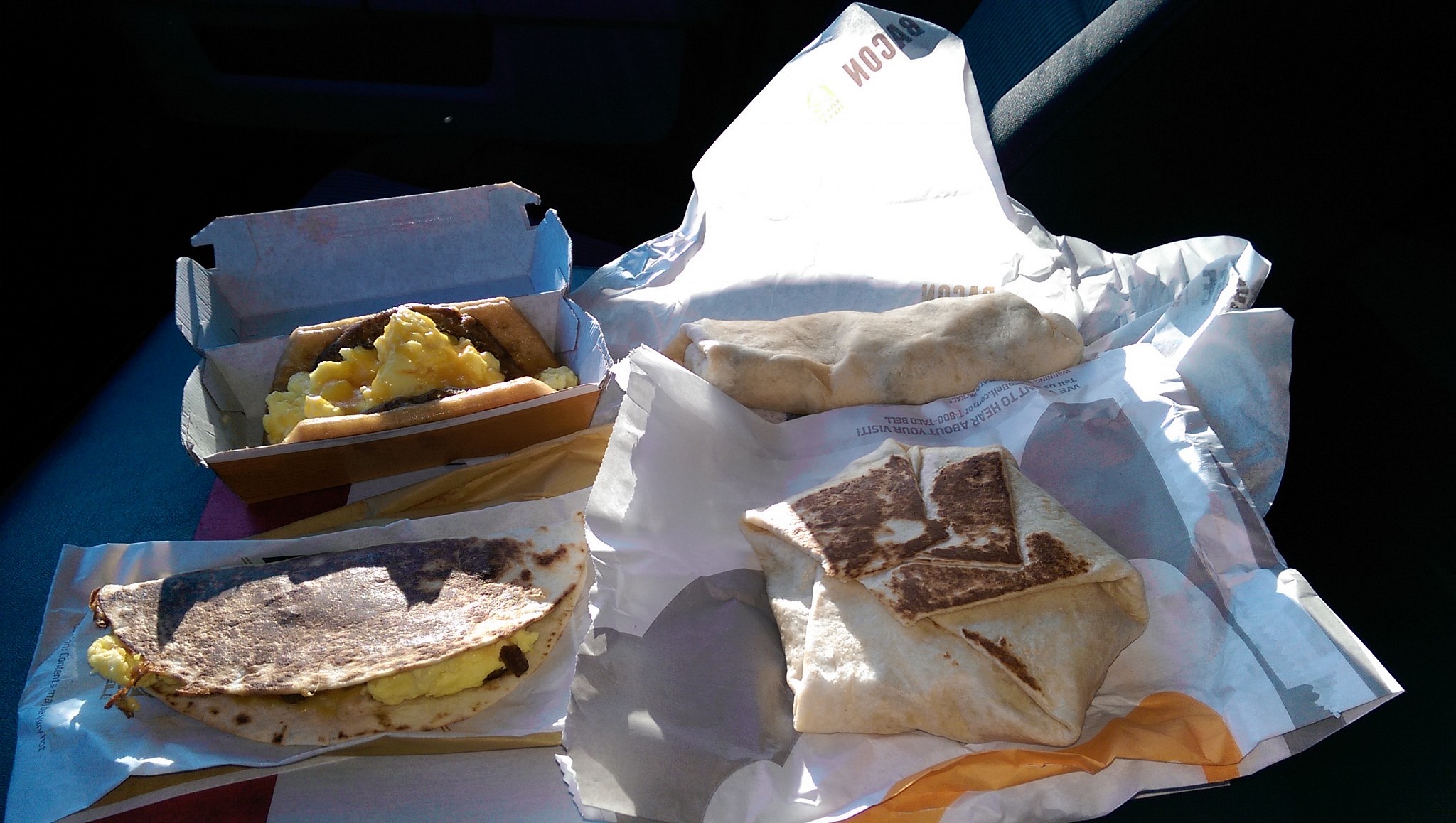 (Editors note: Michael Pitts was invited to share his experience with FactoryTwoFour after posting a lightened version initially on reddit.com.)

As you may or may not be aware, Taco Bell started selling breakfast yesterday. I’ve been eagerly anticipating this for a long time. Ever since I saw the articles about the breakfast menu rolling out in test markets, I wondered what magical delights Taco Bell would bring to me early in the morning. I finally got my chance to find out and I may or may not have gone far beyond the confines of good judgment when I ordered my 1.5 pounds of self-abuse. I bought one of everything because I’m an idiot and some part of me thought that I wouldn’t immediately regret my decision. Maybe you can learn from my mistakes

Can we pretend for a minute that this doesn’t look like one of the worst ideas I’ve ever had? It’s a waffle with sausage and eggs. How can that be anything but delicious? Well for starters, the “taco” was greasy. Really greasy. Like “what the hell is this thing” greasy. It also tastes nothing like a waffle. The flavor was kind of bland and the texture was chewy with a crunchy outside. Not terribly unlike a crispy sponge. Syrup makes it better, but do you really want to do that to yourself? I mean look at the thing. Does dumping high fructose corn syrup and maple flavoring on top of that sound like the right thing to do? Doesn’t matter, because I did it. I’m not proud of my actions, but I won’t hide from the shame when I deserve it.

The “breakfast taco” is a lot of scrambled eggs with some cheese and those little rabbit turd sausages on a tortilla. They slap it on the grill press to crisp the outside and melt the cheese, which also sort of makes it look more like a taco and not just some scrambled eggs on a tortilla.

This was so… what’s a word that means bad, but is more likely to get you to stay the hell away from this thing? It’s scrambled eggs in a Taco Bell tortilla. Nothing helped this. Not the brown sugary goop they call syrup, the picante sauce, the ketchup, or even my tears were enough to make this worth the price of admission.

I have been told by citizens of New Mexico and Texas that my opinion of a breakfast taco has been tarnished by Taco Bell’s meager attempt. Apparently a properly made breakfast taco is a thing of beauty, but Taco Bell managed to screw the pooch on this one. That’s pretty much what I expected. Please calm down, breakfast taco fans. I don’t hate all breakfast tacos, just this particular one.

This is pretty much your standard breakfast burrito, but with less effort. Usually in a breakfast burrito you’ll have some onions or some peppers, maybe a little salsa. Not this time! In here we find eggs, meat, and cheese, sprinkled with sadness. This thing might have been better had it not been half eggs and half steak, so that I got nothing but eggs for the first half and nothing but steak for the second. You can kind of see it in the picture. See how the burrito is all brown on the left and yellow on the right? That has nothing to do with my pro phone photography skills. Chalk that up to a healthy dose of Taco Apathy by the artisan who lovingly crafted my bagful of shame this morning. I was regretting my decision about 2 bites into this thing, and I still had to eat the Crunchwrap.

This one is hash browns, more scrambled eggs (I’d probably consumed at least half a dozen eggs at this point), bacon, and what appears to be a chipotle queso. I popped it into the toaster oven so that the taste wouldn’t suffer from being cold. The bacon tastes more like Bac-Os than real bacon. Same weird half-squish-half-crunch texture when you bite them, and the same plastic aftertaste. Ketchup helps, but that’s not saying much. When your starting point is “Why would you do this to yourself” you could probably drag it across your b-hole and make an improvement, depending on what you had for dinner the night before. As I wrote this, I had 4 bites of the Crunchwrap remaining. I was tempted to throw it away, but I ain’t no punk. I finished the last of the unholy quartet of gastrointestinal abuse like a man who has yet to realize that decisions have consequences.

It has been roughly 8 hours since I embarked on this ill-fated endeavor, and I can tell you that I have learned my lesson. After a few hours of cramping, quite a bit of shaking, sweaty palms, and the inability to trust my own farts, I will never try to be a 4-time champ at Taco Bell again. I’m not built for it. I skipped lunch for obvious reasons (not the least of which being 1700 calories for breakfast) and I’m still not hungry. There’s a pain in my guts that can only be described as karmic retribution, as I imagine my intestines are paying me back for putting them through the misery of processing a deep fried waffle before the sun had gotten all the way above the trees.

Was this a bad idea? Most assuredly. Do I regret it? For the next few hours, definitely. But there’s no point in growing old if you don’t have fun stories to tell people once you’re there, so why bother being so cautious? The pain in my gut will fade and I’ll still have the memory of that time I was dumb enough to think that scrambled eggs from a fast food joint wouldn’t ruin my poop chute for the rest of the day. As long as it makes for a great story that gets people to laugh, it was worth every bite.