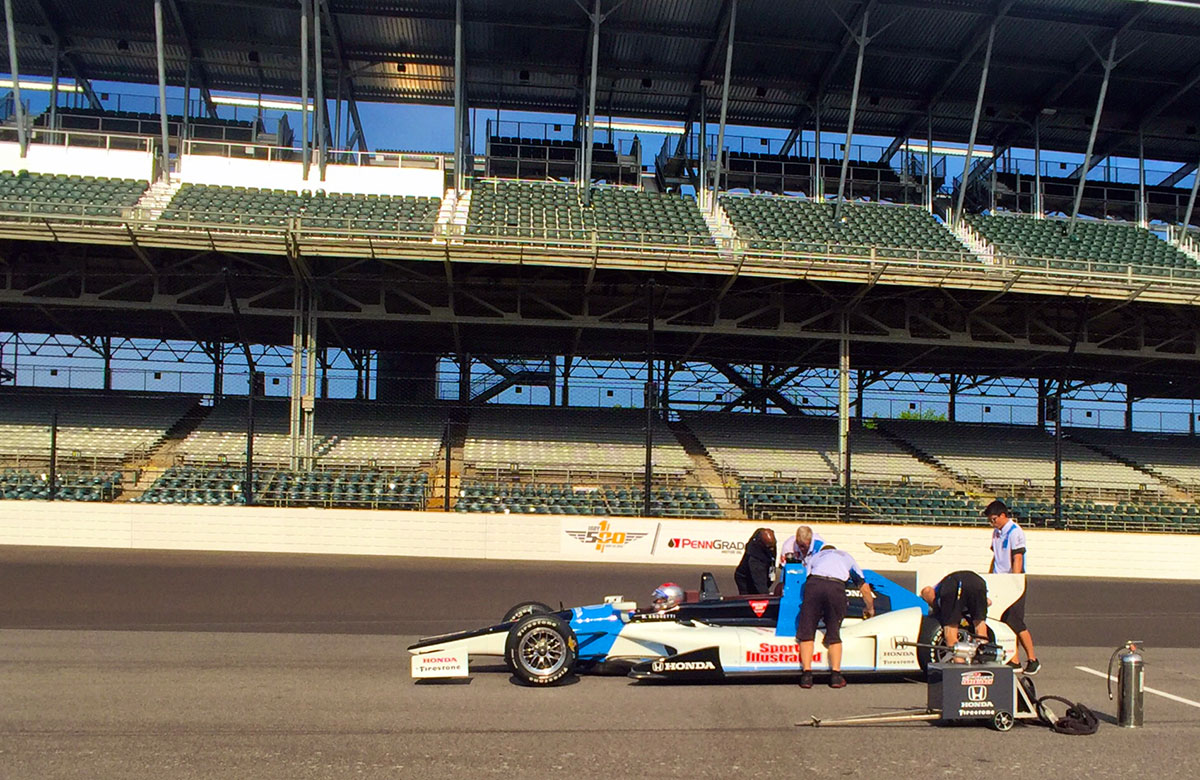 Life at 180 MPH: An Exhilarating Ride at the Indy Racing Experience

Mario Andretti, Sr. comes to a hard stop just 50 feet in front of me. His stare is transfixed on the curve ahead of him as he slowly regrips the steering wheel. He revs the engine. I can only imagine the itchiness world-class drivers must feel when they’re forced to stop. That need for constant motion is instinctual and ever-present. The empty rear seat of the purpose-built tandem IndyCar he’s piloting awaits the next rider.

“Next!” a pit crew member shouts, shattering my daydream.

Is he talking to me? Elated at the thought of Mario-fucking-Andretti personally chauffeuring me around the track, I half-step forward long enough for another crew member to break my stride. Placing his palm flat against my chest, he utters a stern: “Not you.”

This is the Indy Racing Experience at the legendary Indianapolis Motor Speedway. For racing enthusiasts, there’s almost nothing like it on earth. When would-be organizers of the IRE approached decision-makers at the Speedway, they were almost laughed out of the room. Their vision was to allow average Joes — anyone with a pulse and the height to reach the steering wheel and pedals — to pilot legitimate IndyCars at speeds of up to 130 mph. It sounds insane because, of course, it is insane.

But, if any city in the world could figure a way to realize this lofty goal, it would be Indy — home to one of the world’s premier auto races. With plenty of persistence, patience, and — I’ll hazard a guess — palm-greasing, their vision became a reality. Today, Indy Racing Experience visitors can choose from one of two options. The Drive Program allows wanna-be race car drivers to command their own authentic, detuned IndyCar for three full laps at up to 130 mph. With the Ride Program, riders hop into the rear of a tandem IndyCar to scream around the track for two laps at up to 180 mpr. Riders experience g-forces that few others — aside from fighter pilots and astronauts — on earth will ever know. Deciding which program to choose isn’t easy. But, because I love speed, I opted for the latter.

By the time my non-Andretti driver arrived, I’d been suited up for only 20 minutes, but it felt like hours. I was itching to just go. I climbed into the rear seat while the pit crew pulled my racing harness into place. My helmet was barely secured before we pulled hard out of the pit as though we’d been rear-ended by a freight train. I didn’t know that level of acceleration was possible without leaving the ground. My head, arms, and body felt magnetized to the seat behind me. I couldn’t move. For a second, I thought, “This is what astronauts must feel like upon lift-off …” and all I could do was scream. A raw, pure, animalistic howl which was completely drowned out by the engine roar. I couldn’t hear it. My driver couldn’t hear it.

We were through the first turn and into the straightaway in seconds. The driver goosed the pedal and we hit the max 180 mph almost immediately. My painfully tight-fitting helmet began to pull away from my head. Gravity and nylon were no longer enough to keep it reliably in place. The engine roar was so loud that my hearing was reduced to a narrow hum somewhere between my ears. The world on either side of the car — the track, the fencing, the bleachers, the spectators — all melted into a streaky watercolor painting without edges or definition. Still, I continued to howl.

I closed my eyes as we pulled into the second turn and time suddenly stood still. I couldn’t comprehend how the car was physically staying glued to the track at such speeds. What’s more: how was my driver skilled enough to keep the car on the asphalt?

As we completed the first lap, we passed the pit we’d just left seconds earlier. I later learned my girlfriend was waving, screaming for me, and snapping photos the entire time. Unfortunately, she was but a mute blur in my periphery.

We lapped once more before returning to the pit where I exited the car as quickly and unceremoniously as I’d entered. In minutes, I’d collected my personalized IRE plaque, stripped off my fire retardant racing suit, and returned to the parking lot. The ride was over and I struggled to ground myself back on planet earth. I was seeing stars and my hearing had yet to return. But, try as I might, I could not stop smiling.

Even though I’d only experienced a fraction of what world-class drivers contend with on any given race day, I left with a whole new appreciation for the sport. It was an exhilarating and, quite literally, once-in-a-lifetime experience.