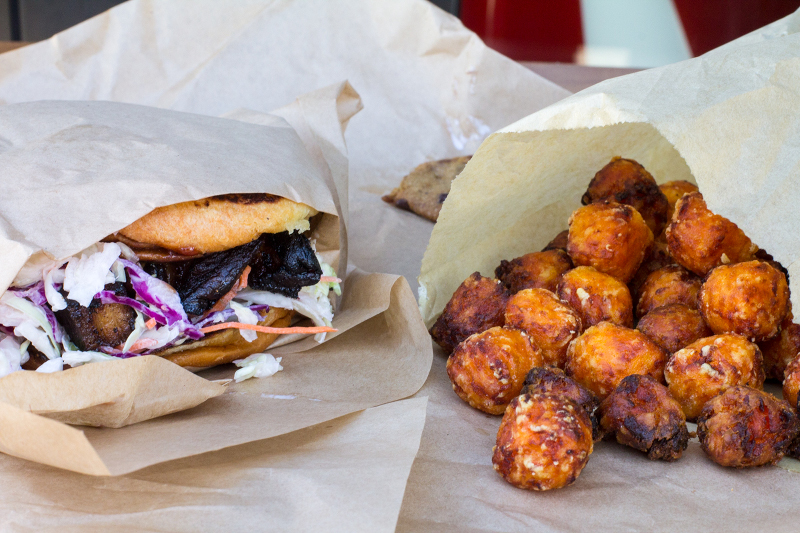 Is This The Best BBQ in America?

Is this small shack  tucked away in Venice Beach named Chop Daddy’s putting out the very best BBQ in America? Well no, that would be insane. What constitutes the “best” BBQ is likely the only more divisive subject in these United States than your political party or your view on the Kardashians. BUT I can say – and do to anyone who will listen – that Chop Daddy’s is putting out some seriously delicious grub that will satisfy any “wet” BBQ fan or southern cooking aficionado.

Located on Venice Beach’s Abbot Kinney Blvd, Chop Daddy’s is tucked between an organic cafe and a froufrou wine store. No they don’t belong on this bock of upscale furniture and sun dress boutiques, and I love them for that. They’ve really gone for it too, with a huge mural of a skateboarding Z-Boy on the side of their shop and an “outdoor patio” out back that is a decidedly non-chic picnic table on astroturf.

So it’s a non-pretentious kitchen pumping out finger licking BBQ, but what do you order? After an absurd amount of visits and menu explorations, my go-to recommendation is The Chop. This perfectly smoked brisket sandwich is topped with creamy southern slaw (damn Southern) and served on an impossibly airy brioche bun. This isn’t one of those grey meat sandwiches with a impotent squirt of BBQ sauce on top for some flavor, no this meet is swimming in its subtle sauce from before it ever touches the roll. That’s not to say it is a complete disaster on your hands or clothes either. The thick sauce clings to the meat like it should and never overloads your taste or distracts from the honest brisket flavor.

Don’t even think about getting any of their fantastic sandwiches without picking up a side of sweet potato tots or even better their crispy fried pickles. These things are the bane of my existence – and I mean that as the highest praise possible. These pickle chips are doused in a light batter, fried to just beyond golden brown, and served up pipping hot with a side of spicy aioli dipping sauce. I swear I taste paprika in that batter, but whatever it is these aren’t your run of the mill fried pickles that rely solely on the chip to provide flavor. The batter nicely balances out the acidity of the pickles and the firm crunch as the aioli dissolves on your tongue is pure food paradise.

If you’ve got room after a sandwich and side – and I don’t know how you would – Chop Daddy’s has you covered with a bread pudding that is ethereal in its texture but with a decidedly worldly punch of sweetness. Served with a cloud of whipped cream and drizzled with a light caramel to provide balance, I’m always able to gobble down about half a serving before I want to just lay down and wait for my body to die.

It might not be the best BBQ in these United States, but nothing is. What Chop Daddy IS, is a bastion of good ‘ole flavor and quality that rises above superficial fare with which it competes. If I balloon up to 400lbs next year, Chop Daddy will be the reason why. God bless ’em.