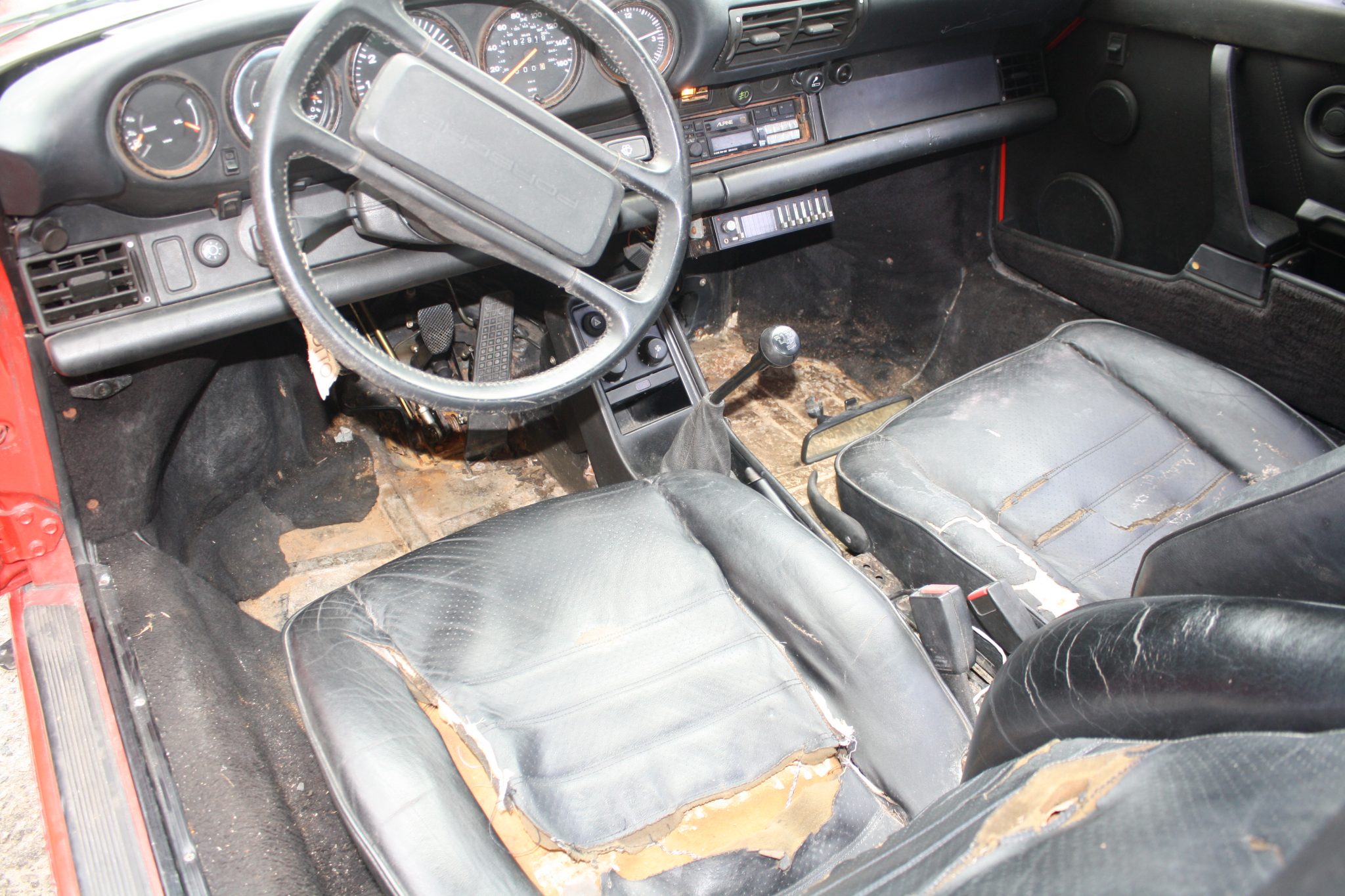 There’s something about a car being delivered on the back of a flatbed tow truck that is a combination of strange feelings. On the one hand, it is the ultimate in delivery service – making sure the car is safe and doesn’t collect a single dead bug or even put on any additional miles. On the other hand, 90% of cars on tow trucks are seriously broken and in need of some love. It is with this cognitive dissonance that I greeted my new Porsche. I giddily informed the truck operator that he was delivering a massive amount of happiness and that I’d wanted this vehicle for a decade. He was nice enough to pretend to care for a whole 20 seconds.

At first sight, this 1988 911 Carrera Coupe was certainly rougher that the online listing. There were more small rust bubbles throughout the body than the single one that was photographed, including a small but worrying one on the rear window frame. While on the inside – holy shit the was half missing, all rotted, and had a unique funk of a drowned smoker. But no matter! My dream car 911 was in front of me and I wasn’t going to be brought down.

Once the car was on terra firma, I grabbed at the key and jumped in like it was Christmas morning. Nothing. No action from the battery. Who sells someone a decently expensive car and doesn’t charge up or replace the battery? I move past it.  The truck driver connects a jump pack and she starts up with the beautiful racket of a bag of hammers inside a clothes dryer set at permanent press that only an air cooled engine can make. She runs! Well, she was supposed to, but it is exciting nonetheless. I am grinning like an absolute idiot. I see the fuel gauge is sitting well below empty. Who sells someone a car and doesn’t have the decency to throw in a quarter of a tank? Still moving past it and filled with joy. The truck operator leaves as he senses I’m about to hug him and ask him to have a cry with me, and with that I’m all alone with my new Porsche.

Sit Rep: The interior is a total loss. What little carpet there is left is as good as ruined. The seats are more ripped than 1970’s Lou Ferrigno, and the dash gauges somehow all have rust on just their bottom bezels. This car has seen some water. After a panicked rummage through the floors and carpet, I’m sure this isn’t a Hurricane Sandy or flood car. The water damage is too light and the floor is sound. It looks like the sunroof has been left open for one or more Florida rainy seasons. A look around the sunroof shows that it has been totally scavenged and just the metal cover is being “securely” held into this German precision sports car with a wedge of cardboard. Moving outside, beyond the half-dozen rust bubbles, the front bodykit has a decent crack from too many valet curb kisses and all the black rubber trim is looking seriously tired.

This is all fine and mostly what I signed up for – why pay for nice exterior panels or interior carpet when I’m going to replace most of it anyway? All I needed – and paid a hefty inspection to ensure – was a strong engine and running gear. And my test drives did not reveal exactly that. Shifts are good, low end pull is strong, and the handling is on point. But on full bore, when I crest 4000 RPM, our little 911 looses all power and starts coughing and trying to find its place either in fuel delivery or timing. This is not good. I can look the other way on a dead battery, or an empty gas tank, and even on a mostly missing sunroof system. But now engine trouble on a car I had independently inspected? My cool was officially gone.

I can’t blame the seller, it is his job to offload the car. I can, and do blame the Florida shop I paid decent coin to for an unbiased walkthrough and opinion on the car since I couldn’t see it in person before I bought it. After an angry exchange of words over email and phone with the shop, they refunded my money in exchange for not being named here. I will just say this: if I needed any Porsche work done in the Miami area, I wouldn’t be going to any shops that rhyme with Bertex Auto.

With the worrying development of engine trouble right in front of me, there’s nothing for it but to get stuck in and get to work. This full Porsche backdate project where I turn this run-of-the-mill 1988 911 into a very special 1972 RS should take me about a year and cost anywhere from $10,000 to infinity dollars. My goal is to be smart and crafty and come in at a total out-of-pocket of  that low end $10K by doing the work myself and selling as many parts off the car as possible.

The full order of operations will be as follows:

Along the way, there will be lots of broken knuckles, bruised egos, and too much fun. In the next post I’ll be tackling the suspension and brakes, and remove that crusty interior. Let the work begin!