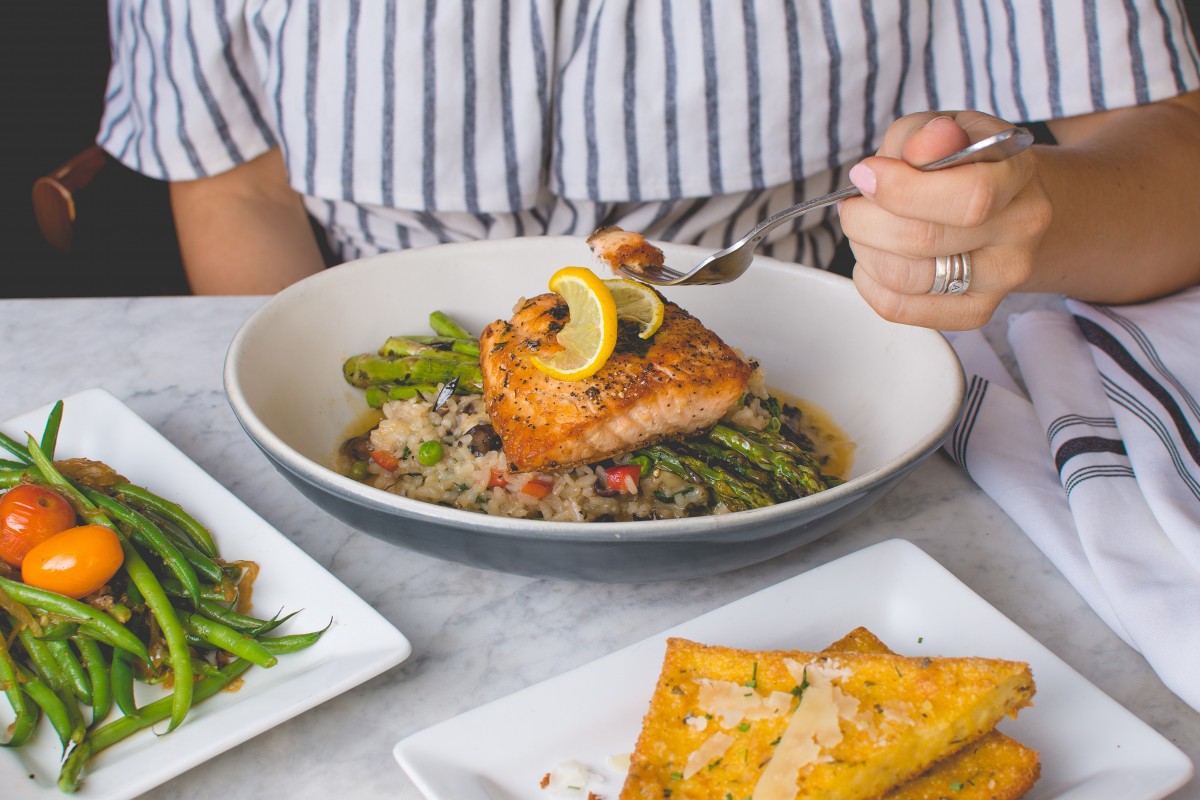 Health Benefits of Including Salmon in Your Regular Diet

Eating food incredibly healthy and amazingly delicious at the same time – is that even possible? Yes, if you include salmon in your regular diet! It is hard to think of something more scrumptious than a juicy salmon steak or a heavenly refreshing slice of smoked salmon. But just as we said, this fatty fish is not only one of the tastiest but also officially one of the healthiest foods on earth. If you are a beef buff who is still reluctant to replace it with this unique gift of nature, it is time to find out how salmon can benefit your health and well-being!

Born in the river, salmon prefer to spend life at sea but return to the birthplace to spawn. That is why they are considered anadromous, which means they can live in both salt and freshwater.

Did you know that salmon can change color? During their lives, some of the species can do it up to three times, being light and often spotted when they are “young”, getting silvery blue when adults, and finally turning stunning red when it’s time to spawn. By the way, there are many types of salmon and each of them has its own virtues. Five of the six known species – Chinook, Coho, Sockeye, Pink, and Chum – are native to the Pacific ocean while Atlantic Salmon is the only one native to the Atlantic ocean.

Just one more thing, scientists consider salmon keystone species, which means they have a disproportionately huge impact on their ecosystem in comparison to their number. Certain valuable nutrients from salmon bodies were found in mosses, herbs, trees, insects, bears, wolves, and even songbirds because the rotting carcasses of these fish transfer them from the ocean to land. If salmon were to disappear, it would negatively affect the entire ecosystem that is home to a wide variety of animals and plants.

Now when you know how salmon benefit our planet, let’s take a closer look at all the good things this fish brings to our health.

It is common knowledge salmon is a precious source of omega-3 fatty acids (EPA and DHA) and potassium. According to numerous medical studies, taking just 0.45 to 4.5 grams of omega-3 fatty acids can improve your cardiovascular system, contributing to enhanced heart function. Those acids are also real game-changers when it comes to problems with high blood pressure, and high levels of “bad” cholesterol. Regular intake of delicious salmon can also help to reduce artery inflammation and prevent the retention of excess fluid. The majority of cardiologists recommend their patients salmon as a natural way to minimize the risk of developing various heart-related conditions, with heart attacks, arrhythmia, high triglycerides, and high blood pressure to name just a few.

Salmon is not only fatty, but it is also very rich in protein. The latter is one of the most important “building” elements for our muscles, bones, skin, and cartilage. Our bodies can’t function properly without a sufficient amount of protein, and with 25g of protein in a 100g serving, salmon is just a great supplier, isn’t it? People who have been injured need to eat salmon in order to speed up the process of building new and repairing broken tissues. Salmon is also great support for all those who want to lose weight but maintain muscle mass and keep a healthy metabolic rate.

It’s hard to find a better source of the entire vitamin B group than salmon. Decent amounts of each and every vitamin from the B spectrum is the reason why this fish is unrivaled food when it comes to supporting a healthy nervous system, which in its turn, is a strong basis for health in general. There are plenty of foods that are rich in just one or two vitamins B, for instance, only B3 or B12 but the thing is, the B group only works when all its members are present to create and repair DNA. Salmon is just this kind of product, with the whole assortment of B vitamins vital for a healthy nervous system, as well as for hormonal balance.

Salmon is incredibly rich in minerals and one of them is selenium, which is in charge of a healthy thyroid and its proper functioning. Just one decent portion of salmon can give your body enough selenium to protect your thyroid gland from oxidative damage that usually occurs as a result of the synthesis of the same-named hormone.

Salmon Is Good For Your Brain

Again, omega-3 fatty acids and their fantastic abilities. Thanks to a winning combination of high levels of Docosahexaenoic acid (DHA), vitamin A, vitamin D, and the already mentioned selenium, salmon is a real booster for your brain function. There is no energy drink that can compare to this fish in terms of improving your cognitive abilities, both short- and long-term memory, and other vital brain functions. Some studies even show that consuming salmon during pregnancy can help the development of the fetal brain.

More and more people are getting affected by osteoarthritis, the most common form of arthritis that is now seen even in a younger population. It occurs when the protective cartilage that cushions the ends of your bones wears down over time. Even though virtually any joint can be affected by osteoarthritis, this disease usually damages the knees, hips, spine, as well as hand joints. Apart from omega-3 fatty acids that reduce joint inflammation, salmon also contains bioactive peptides that encourage collagen synthesis, helping to protect cartilage and reduce the possibility of developing osteoarthritis.

As you can see, salmon is an ultimate catch. This fish is not only heavenly delicious but also brings plenty of health benefits. Given today’s crazy busy life and often a lack of opportunities to have a healthy meal, salmon can easily become your next favorite. It is tasty, easy to cook, and loaded with proteins, vitamins, minerals, and good fat. Can you really afford not to include this treat in your regular diet?