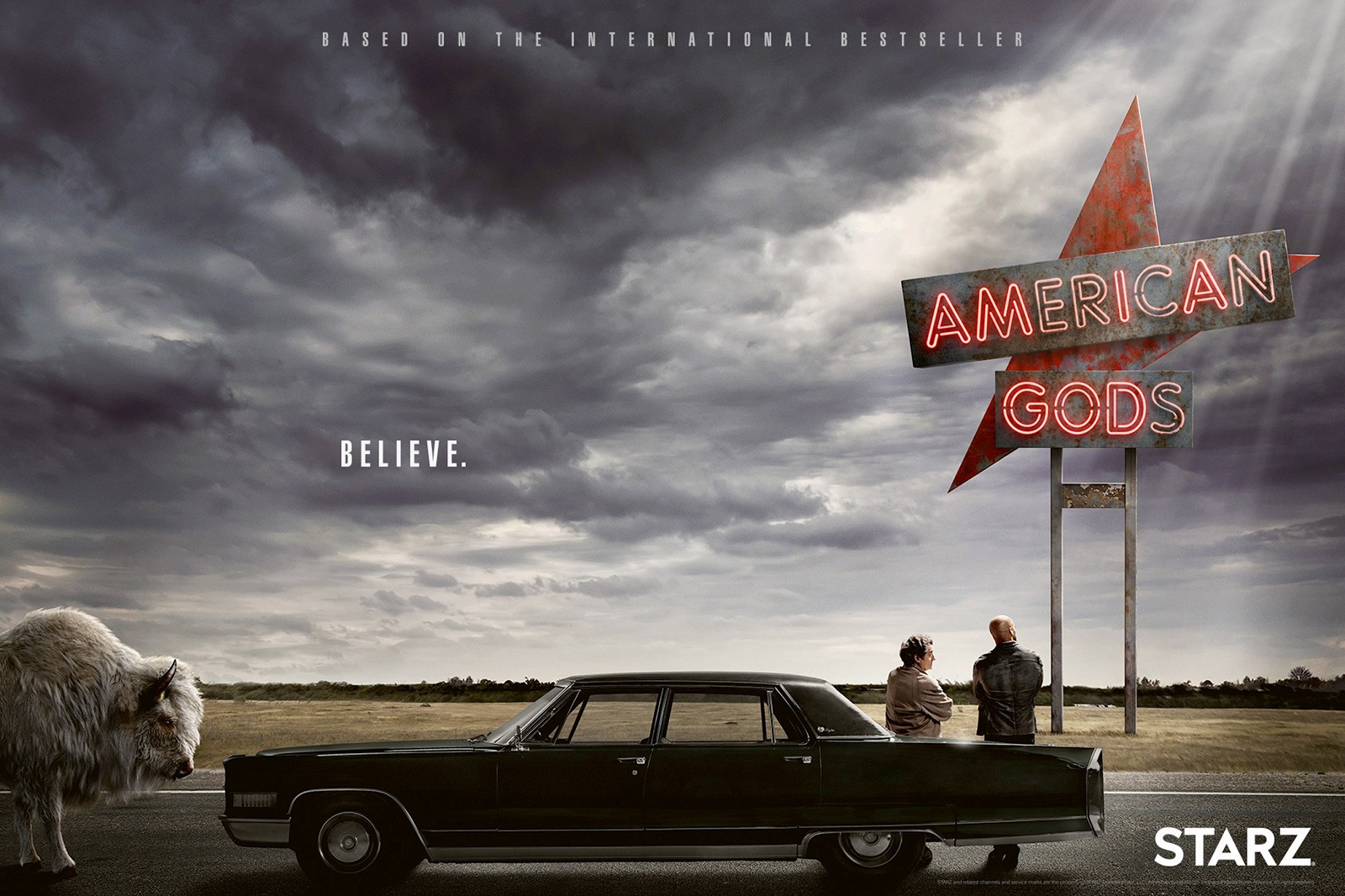 All Hail the Sacred and Profane World of American Gods

Maybe it’s the atheist in me, but after its first awe-inspiring episode, American Gods feels very praiseworthy. Or maybe it’s not atheism so much as not knowing what to call the universal energy that others may call God. But for a man of my wavering beliefs, such a TV show isn’t mere entertainment, it actually takes on some religious bent — for how often do I really sit down and think about God? Or Gods, as Neil Gaiman’s 2001 novel would have us believe, and Bryan Fuller’s (Pushing Daisies, Hannibal) vivid new STARZ adaptation of that Hugo and Nebula Award-winning seminal work.

“American Gods begins with a bloody and borderline-comedic prologue that finds Vikings landing in 813 America, where they quickly learn they are not welcome. But to move on to a more pillage-able people elsewhere, they need wind. So they make increasingly more sacrificial offerings to Thor’s dad.”

Even if you’re so blessed as to not be struggling with your faith, the new series should at least get you thinking about that relationship. The premise of the show is that the mythological Old Gods are real, if you but believe in them, but they have fallen from favor, lost power, and landed on American soil. But in order to survive, they’ll need to band together and wage war against new gods, like Media (Gillian Anderson) and Technical Boy (Bruce Langley). As Odin (Ian McShane) —the man responsible for stirring up the Old Gods in this fight — says in the trailer below: “War, it will be glorious, win or lose.” And yep, after one episode, glorious it is.

The show begins with a bloody and borderline-comedic prologue that finds Vikings landing in 813 America, where they quickly learn they are not welcome. But to move on to a more pillage-able people elsewhere, they need wind. So they make increasingly more sacrificial offerings to Thor’s dad.

After that spectacle, we are introduced to the show’s main narrative: the unfolding story of sturdy and philosophical con, Shadow Moon, played by Ricky Whittle (who’s perhaps best known for kicking ass in 2009’s season of the BBC reality series, Strictly Come Dancing). Big, buff, thoughtful Shadow is killing the rest of his limited time in jail, feeling like something wicked his way is coming. He speaks to his loving and waiting wife, Laura, (Emily Browning of Sucker Punch fame) who assures him that all will be well, and that she’s planning his imminent coming-home party with Shadow’s best friend Robbie – who’s got a gym job waiting for him.

Alas, all isn’t well, and Shadow gets let out early to attend Laura’s funeral back home, across the country. Yeah, he didn’t see that one coming. It’s at this point that the show gets infinitely better though, as Shadow meets a charismatic and enigmatic fellow traveler, who we’ll presumably find out at some episode down the road — SPOILER ALERT — is Odin. For now though, let’s call him Wednesday, as that’s his day.

Wednesday offers Shadow a job as his driver/bodyguard. From there, the show starts to take some very dark twists, into the toothiest crocodile bar around, where Wednesday and Shadow meet the biggest societally-oppressed leprechaun ever; from perhaps the craziest sex scene ever — featuring the Old God, Bilquis (Yetide Badaki), making you really wonder how far you’d go for a great lay – to one of the hottest non-sex scenes to ever take place on grave. Yeah, it gets a bit depraved at times.

But isn’t that why you need God, or Gods, in the first place? The sacred and profane, and all that? Well, I don’t know if American Gods is going to sort that all out for me. But so far, it’s kept me wholly riveted and thoroughly entertained, all while somehow inspiring me to think about those important yet easily ignorable universal questions I so often hide from. And that much I know is worth my praise.