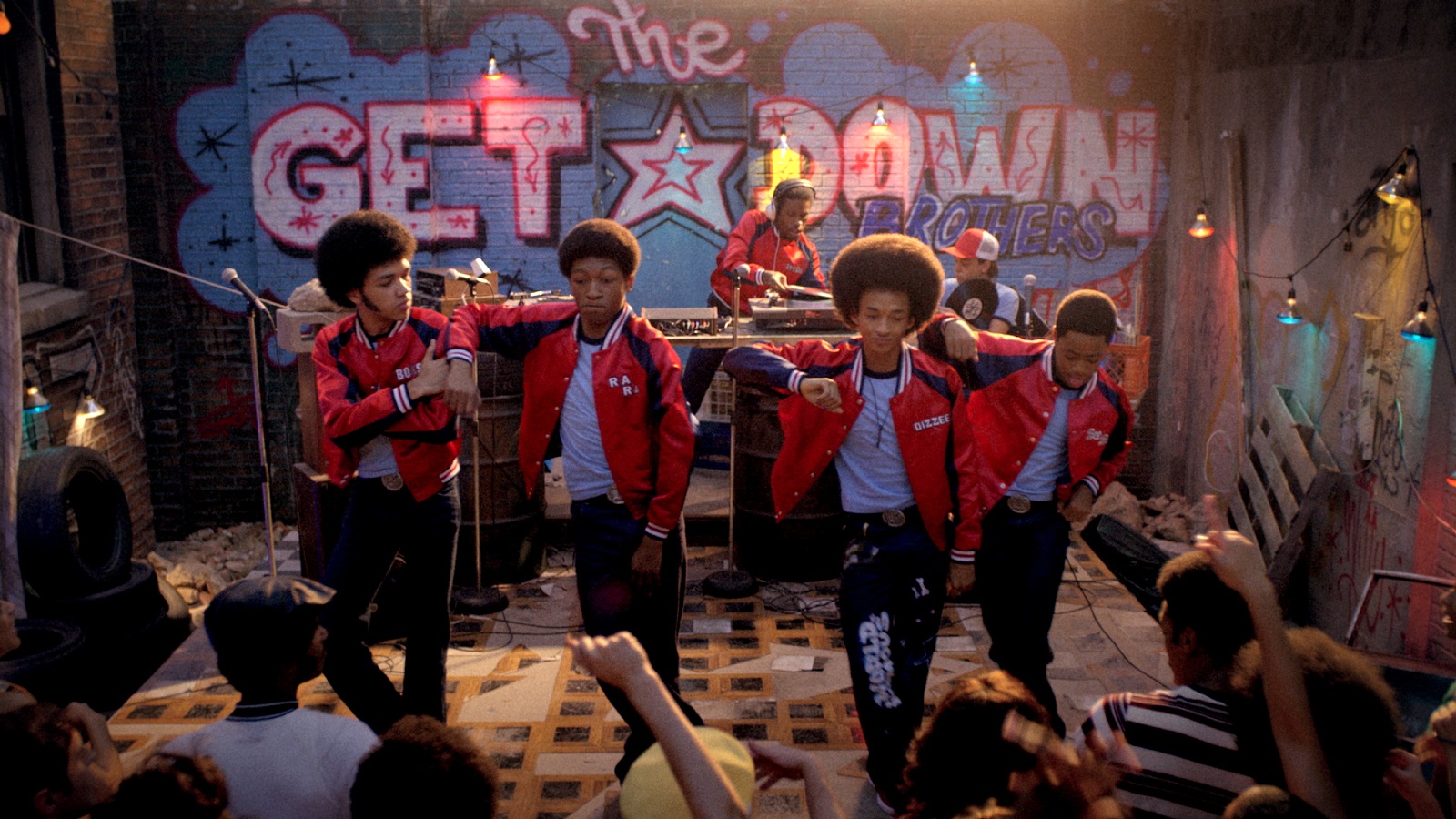 The Get Down: The Most Dynamite Time You Can Have Watching TV

If there’s more fun to be had on TV than watching Baz Luhrmann’s The Get Down, I’ve not found it. Well, at least for the first episode — the only one directed by Baz. But that’s enough to safely call it the most electric, eclectic, and reflective representation of 1977 South Bronx around, and the finest and most exuberant expression of the hip-hop, disco, graffiti, underworld, and Kung Fu communities therein.

The heroes of this sometimes true, mostly fantastic hip-hop origin story are many, but ultimately, it’s the story of four neighborhood kids led by gifted wordsmith, Ezekiel “Zeke” “Books” Fiuero (Justice Smith), who pines for another neighborhood friend, Mylen Cruz (Herizen F. Guardiola) while ably aiding her quest for disco glory. When the four meet mysterious graffiti legend, part-time underworld boy-toy, and aspiring super DJ Curtis “Shaolin Fantastic” Caldwell (the incomparable Shameik Moore), Puma-kicking-Kangol-tipping-record-scratching fireworks erupt, and the Fantastic 4 Plus 1 are born. With a little help from Grand Master Flash, who’s revered as much like a Kung Fu Grand Master as a DJing one, the crew sets out to take over not just the Bronx, but the world, despite the forces of poverty, organized crime, and disco working against them.

Luhrmann co-created the show, along with Pulitzer Prize-winning dramatist Stephen Adly Guirgis. Luhrmann also directed the Shaolin-Fantastic first episode, in all its frenetic, majestic, fluorescent glory. It’s the same type of glory I saw when I first fell for Baz, with Romeo + Juliet – perhaps the only Shakespearean production I’ve ever really loved. And The Great Gatsby is my favorite book of all time, a sacred text, somehow made all the more magnificent and telling in the modern hands of such a master visionary. Both source materials are iconic pieces of art, treated with passionate understanding and vibrant expression, and made all the more vital by Baz. That he has given the origins of hip-hop such legendary light is a testament to those funky forces who lived it, those who soared above the graft and poverty all around, who rose from the ashes of a world on fire, and created something bold and new.

Though Luhrmann relinquishes the directorial reins after Episode 1, and there is a bit of a drop in subsequent shows, his stamp is all over The Get Down, as he remains the Executive Producer. Nas is an EP, as well, and also dubs the raps for the grownup wordsmith, Zeke during flash forward arena shows, which serve to make the Fantastic 4 Plus 1’s origin story all the more epic since you know at least one of them “made it.” The raps also serve as story bumps before and after episodes, like a dope Greek chorus that catches you up far more eloquently than your typical “scenes from last week” fare. Nas’s stature also obviously serves to bolster the creative team’s hip-hop credibility, along with consulting help from the genre’s originators, like Kool Herc, Grand Master Flash, and Afrika Bambaataa.

One thing the show certainly doesn’t lack is music cred, not just of the hip-hop variety, but everything else that was popping in 1977. Indeed, it’s the music that glues this whole she-Baz-shebang together. But it’s more than just a great soundtrack; it’s a celebration of creation, no doubt, and the magical, mythical, world-changing forces that can unleash. Netflix just released the final five episodes of season 1, so do yourself a favor and get down with The Get Down. Your street cred depends on it.