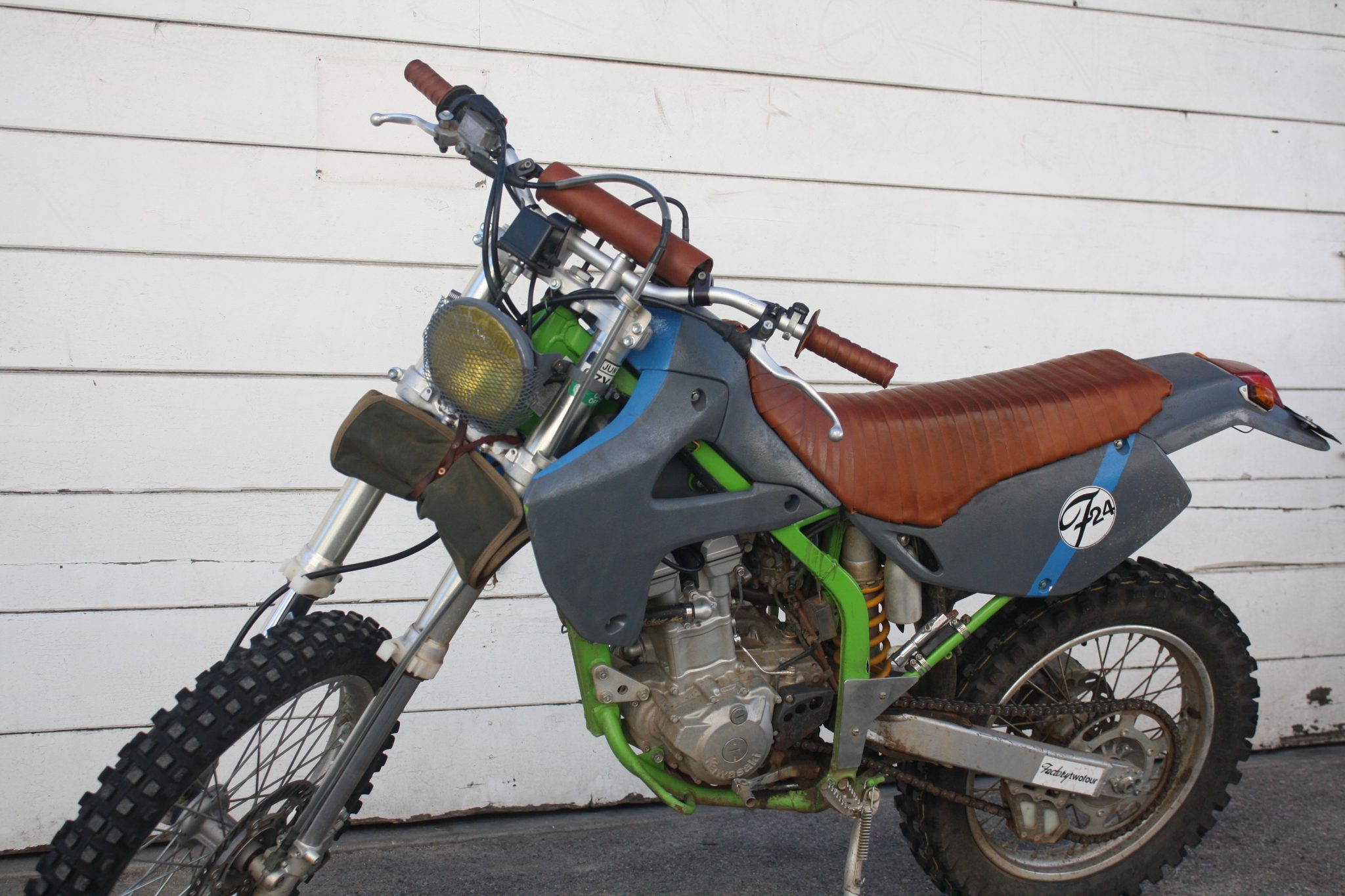 So by now we’ve gotten our Kawasaki, stripped it down, painted it, and added a new headlight and so go-faster F24 stickers. She’s looking pretty good, but not good enough yet. It is not yet exuding it’s urban tracker feel we’re going for. To that end, this week we got rid of the sparse black seat in favor of a more old-school leather affair and add the Iron and Resin tool roll we recently took a look at.

When we got it, this moto was covered in your standard offroad accoutrement like nasty and gummy grips, a Walmart handlebar pad, and a plain-jane black seat who’s better days had seen better days. This could not stand. We are good friends of the Travlr team, we did a review of their fantanstic GoPro case in June, so we reached out to them and asked for a little advice on leatherwork. Instead of hanging up on us like smart people, they stepped up big time and not only taught us how to work with cowhide (pro tip: burn your cuts with a lighter to remove rough edges), but also sent us out a huge piece of their buttery-soft leather to work with. Great guys! Now what to do with it?

First up, we’ve always wanted try wrapping the grips of a motorcycle like you do for the bars of a bicycle. I personally have never seen this (certainly not saying it doesn’t exist), and we had the itch to do it. So we did! We cut off 2 long strips of the Travler leather and wrapped them around the existing grips so there would be some give and cushion. Next up was the god-awful handlebar pad that was the kind of shiny plastic only drugstore Halloween costumes have any right to be. We kept the phone, but cut out a new leather square to go over it. Add in some velcro for easy on-and-off (just like the plastic protector) and that’s two of the three leather pieces done. Next up – the seat. 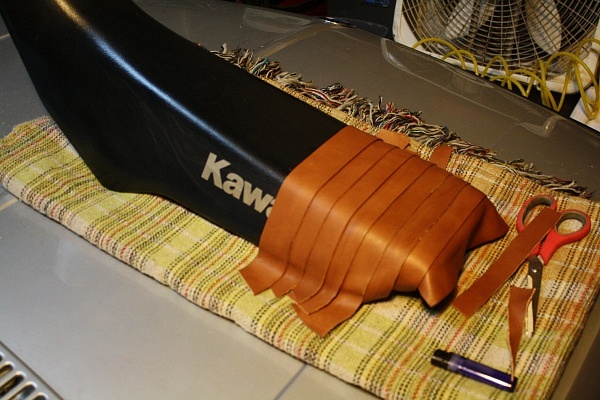 Now the first two projects were a doddle, but the seat was a much different, much bigger, much more complicated deal. To match the wrapped grips, and for something different than the standard quilted diamond pattern, we decided to do a series of strips running up towards the front. Rather than completely strip the current seat, we used the existing black pleather as a good base for our strips to adhere to without damaging the foam underneath. One at a time, we cut strips, glued them down, and set the next one at a precise measurement overlapping. In this manner, over the course of 2 hours or so, we had the seat pretty much completed. We even included a little 4″ loose strip near the top of the seat to tuck gloves or maps into, or just hold onto like at a rodeo…

As the pièce de résistance, we strapped on Iron and Resin’s excellent tool roll to the front forks to hold our tools/Pez dispensers while we are far in the backcountry. You don’t want to do without either of those in an emergency. The FactoryTwoFour bike is really coming together now. Sometime in the future, we may tackle a new exhaust and a custom front fender, but up next we tackle some modern LED lighting for night riding!