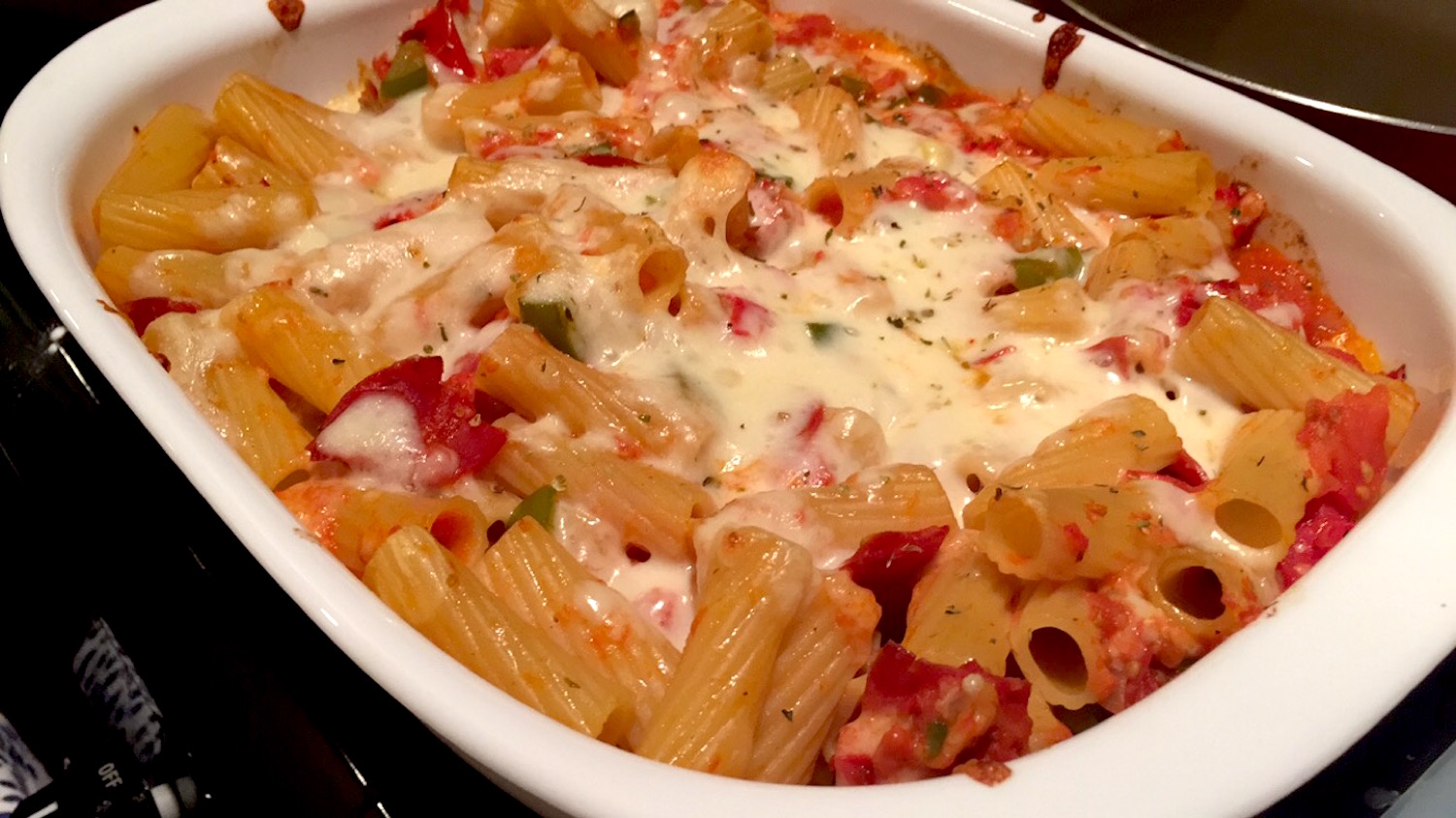 Summer is a hard time for cooking, especially in a Brooklyn apartment, because it’s so damn hot. I wish I could subsist only on salads and smoothies but it only goes so far. I try to make big portions of things so it lasts me for a few days and then I don’t have to make a sauna out of my kitchen too often. This is what pasta is for. The beauty of a pasta bake is you can put literally whatever you want in it- meats, vegetables, cheeses, close your eyes and point to something in the grocery store and throw that in too!

Here’s the major key to a good baked ziti: don’t fully cook any part of it. The whole thing is going to bake together, so if all of your ingredients are already fully cooked, it’s just going to overcook in the oven. 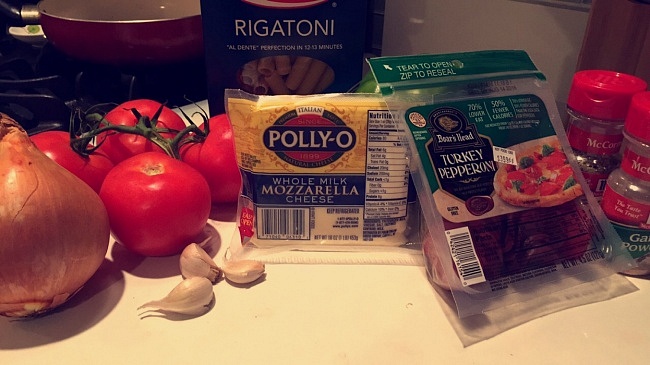 There isn’t really an order to this, but I like to go: sauce, water, veggies, pasta. I’ll explain.

Sauce first. Smash up your nice, ripe tomatoes into a mixing bowl and make sure to squish out the chunks. I like to leave little pieces of tomato for texture, but that’s up to you. Be careful of the splatter tendency- I speak from experience. Once they’re all nice and smushy, pour them into a saucepan and sprinkle in salt, pepper, garlic powder and oregano. You want to leave this on super low so it just simmers nicely without reducing. Make sure you stir it every once in awhile.

This is a good time to boil your water. Use a really large pot so your water covers all the pasta. I went with rigatoni. Yeah yeah, I know, it’s supposed to be baked ziti, but I like rigatoni. Deal with it. Cover the pot so it boils faster.

I waited to preheat my oven until the last possible second because of the whole apartment sauna situation, but whenever you do it, preheat to 375 degrees.

Now the veggies. Finely chop half a green pepper (I prefer green because they stay crunchier, but you pick whatever color you want), a quarter of a yellow onion and two fresh garlic cloves. Dump this into a saute pan and add in three tablespoons of olive oil. You want it to be a little extra oily so the veggies stay moist. Let them sit in there until everything starts to sweat. 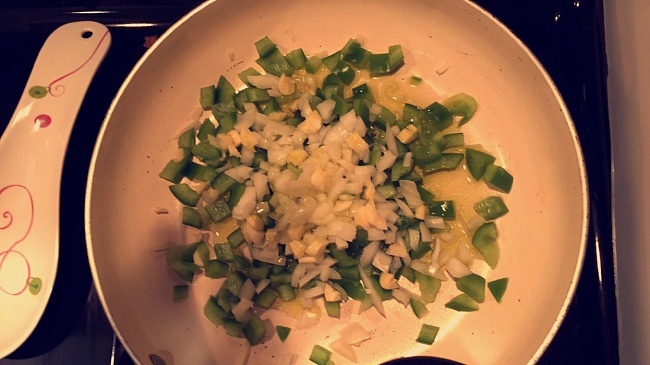 While they’re cooking, cut up your pepperoni. I feel the need to explain the turkey pepperoni in the above photo. Normally, I would never get packaged pepperoni, or turkey cured meats, however, it’s too hot and being a lazy New Yorker, I paid someone else to do my shopping through Instacart (#noshame), and that’s what he picked up. Surprisingly tasty, by the way, as it’s just a little spicy and a lot salty. I used the whole bag, chopping big stacks into quarters. 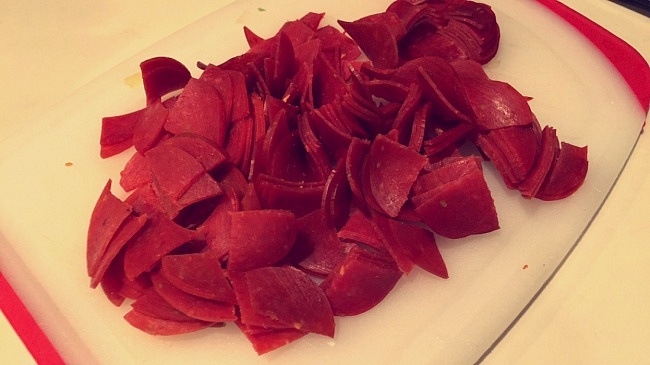 Your water should be boiling by now, or it probably was during the veggie cooking phase. Once boiling, pour the whole box of pasta in and turn the heat down a smidge so it doesn’t boil over, and stir consistently. You’re looking for a nice al dente, going back to that key of “don’t fully cook anything.” 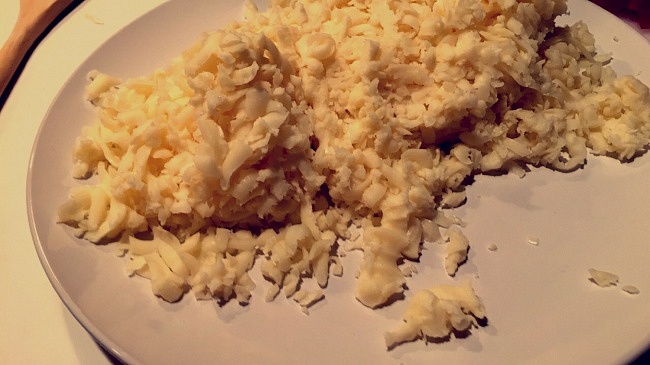 Now is when you shred your cheese. No surprise, but I used the entire block of mozzarella. I guess you could use the pre-shredded stuff; I personally think it tastes just a little like sawdust, but you do you.

When the vegetable mixture is getting translucent, toss in the pepperoni and mix it around until the edges start to get dark. Once done, pour all of this into the sauce, mix it up and let it sit while your drain your pasta. 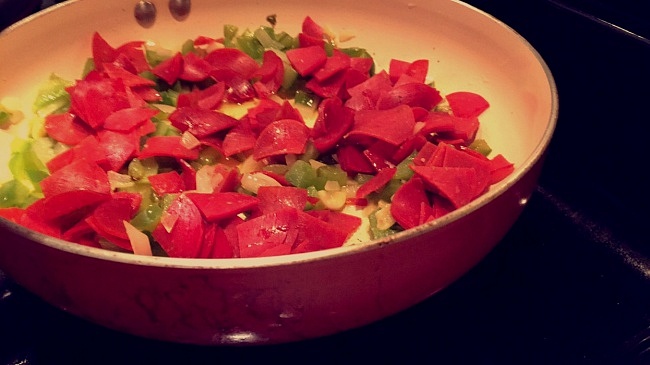 Pour everything back into the pasta pot and mix it up nice and evenly. By the handful, use three-quarters of your cheese in the main mixture, making sure it’s distributed throughout. 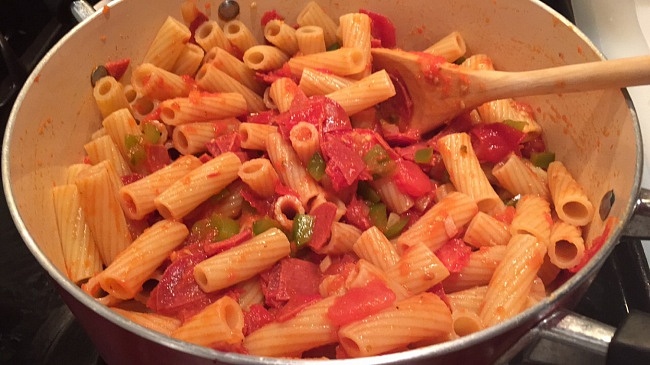 Dump the whole thing into an oven-safe container, top with the rest of the cheese and just a sprinkle of oregano. Bake for about 18 minutes or until melty and golden. 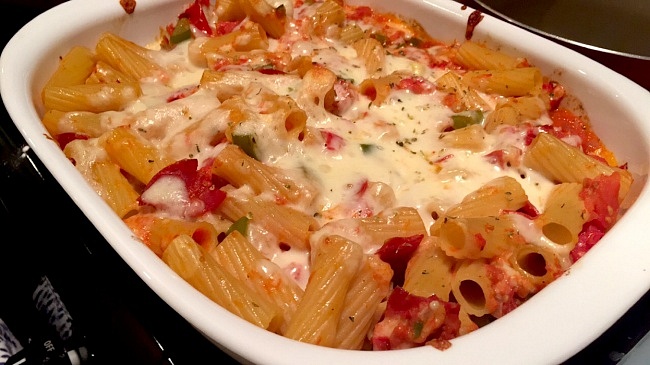 Be careful! This stuff is quite warm when it comes out. Pair with a salad and some chilled white wine for a tasty meal, sure to please everyone.