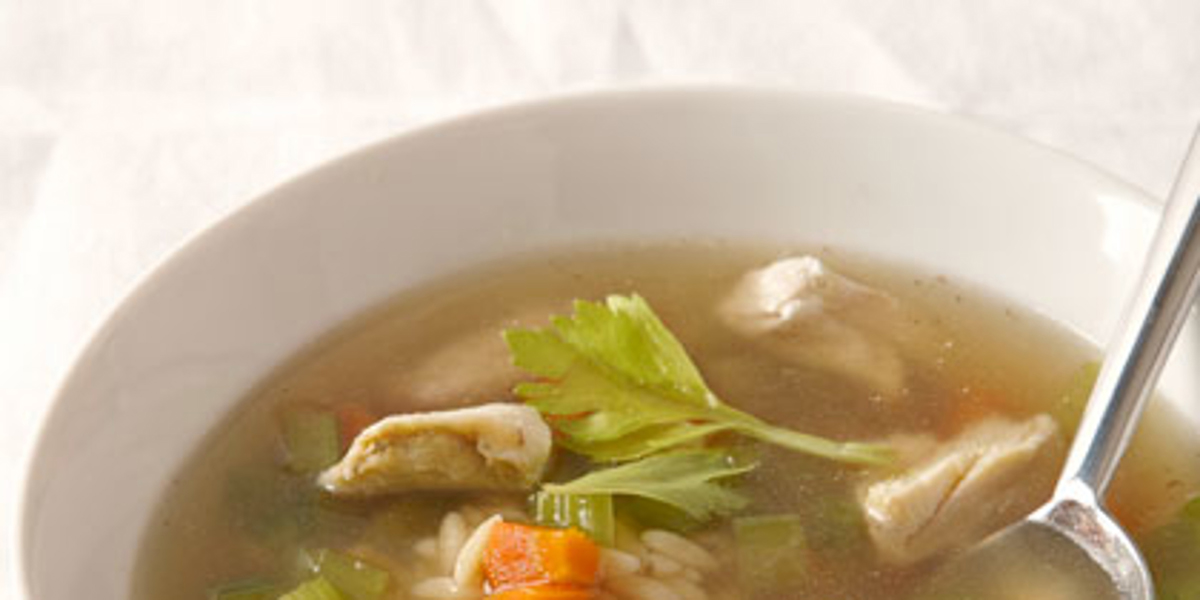 Chicken stock goes into that category of things that I refuse to buy because I can make at home. There are a few reasons why: 1) It is just so absurdly easy. 2) It’s much, much healthier than the boxed or canned versions which tend to have insane amounts of sodium. 3) It tastes so much better than anything processed.

Stock, of any variety, is a staple to anyone who actually uses their kitchen because it’s a part of many major recipes. It can be used for deglazing vegetables, a base for yummy soups, and of course, it heals anything that may be ailing you (re: Jewish penicillin.)

It takes all of ten minutes to prep, about four hours to cook, and eight to twelve hours to cool. You can freeze it for long periods of time, reheat it whenever you need, and it’s easily adaptable!

Okay, on to the important part.

To start your stock, you need the chicken.

Pro-Tip #1: NEVER use boneless breasts for stock. Bones are what give flavor to everything.

For my stock, I used two chicken thighs and one chunk of random bones that I prefer to not describe or look at. I happen to have access to an amazing butcher that is breaking down chickens all day so it was easy to get these extra parts. If you have a local grocer (not a chain store) or even a specialty butcher shop, you can go in, tell them you’re making stock, and that you need chicken bones, and they’ll probably hand them over for free. You can use all random bones or even a whole roasting chicken if you’re planning to use the meat after. 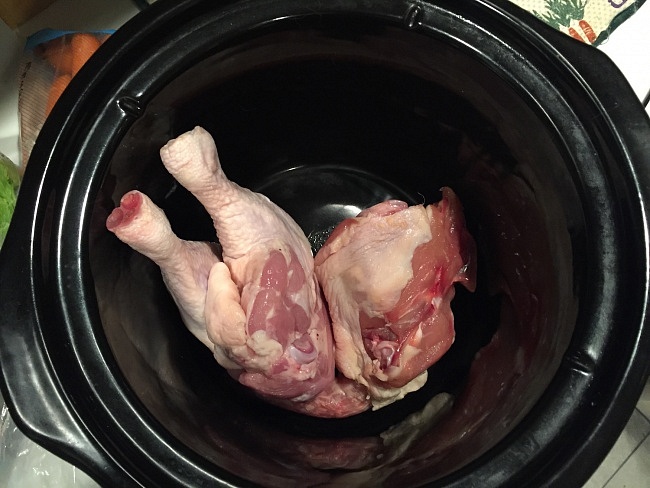 I am doing this in a slow cooker because I don’t have a large stockpot. Really, it doesn’t matter the vessel, you just want it to be a heavy-bottomed vessel that you can cook in over an extended period of time, and you want it to be at least eight quarts.

Now, for the vegetables. The base of almost any soup or stock on the planet is called mirepoix, otherwise known as onions, celery, and carrots. You can learn about the history of it here if you’d like.

Anyway, give these a quick rough chop, keeping them in fairly large chunks, and toss them in with the chicken, along with a couple whole, peeled garlic cloves. Next, come the spices. I go with salt, whole peppercorns, and a couple bay leaves because I like to keep it simple. There are no measurements for these because it’s up to you. 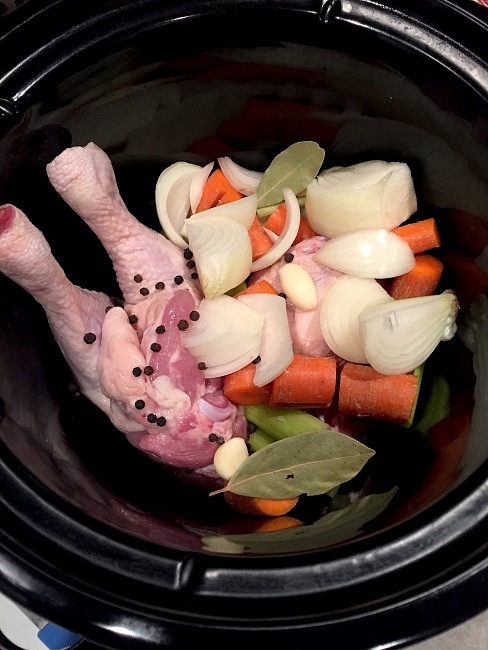 Remember that the more ingredients you’re putting into the pot, the less water goes in, so there won’t be as much actual stock that gets produced because it all reduces down.

Pro-Tip #2: Go easy on the salt. You can always add salt later but you can never remove it.

Be mindful that this is chicken STOCK, not soup, so you want to make it flavorful, but also mellow so you can use it for many things.

Everything goes into the pot with the chicken and now it’s time for the water. You want to fill up your pot or slow cooker almost to the top but leave room for it to boil. For me, this was 9 cups of water. 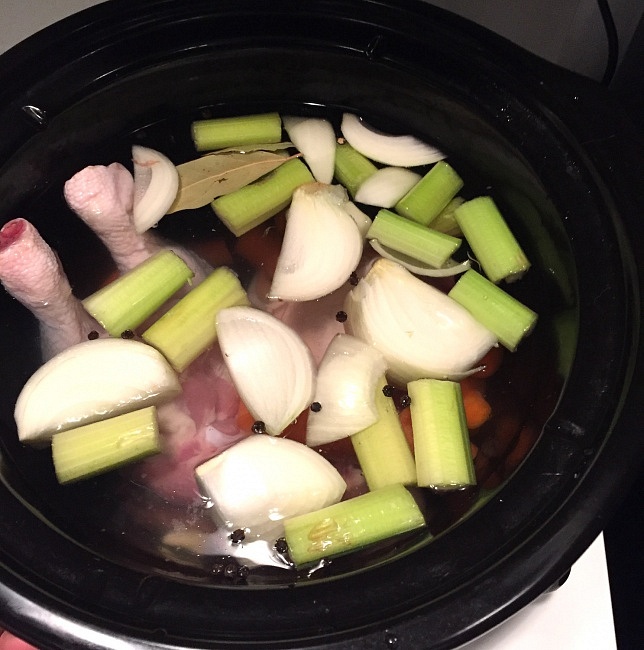 And that’s all she wrote, folks! Turn on your pot, put the lid on, bring everything to a boil for a couple minutes, and then let it simmer on low for about 4-5 hours. After it’s done and the chicken is cooked completely through, strain it out and let it cool for about eight to ten hours, or until there’s this nice layer of fat on top. You’ll scoop this off once it’s completely cool and be left with delicious, smooth chicken stock!

Pro-Tip #3: Don’t use your stock until you’ve scooped the fat off the top or it will be really greasy.

How to freeze: You can freeze it in ice cube trays so you can add it to soups or random recipes. I freeze it in plastic, air-tight quart containers, personally, but it’s up to you. When you’re ready to use, just boil it for a couple minutes and voila! I told you it was easy.

Basically, this is chicken soup pared down to its most basic form. Winter is coming and we all know that means the flu is on the way. Having stock handy is great for healing your icky sickness and all you have to do is boil up some chicken and toss it into your already made stock!