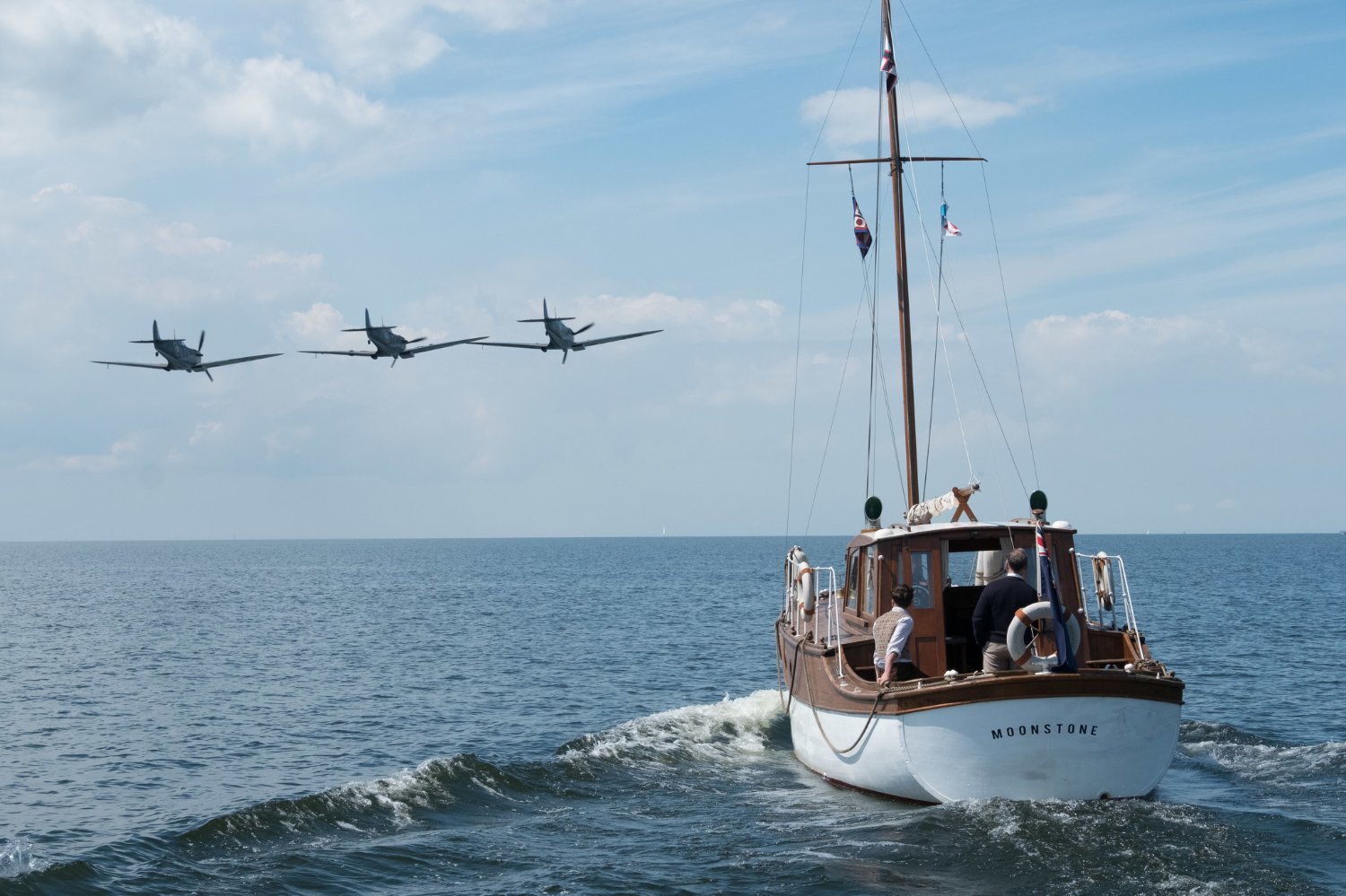 Dunkirk: Death Everywhere and No Pretense of Hope

God, I was dreading having to see Dunkirk. Not that I don’t have all the faith in the world in (is he a Sir yet?) Christopher Nolan, having written and directed the very best comic book movie of all-time, Batman Begins, among other masterpieces.

But Dunkirk is a war movie, and an epic one at that about the miraculous evacuation of the British Army off the beaches of the French port town of Dunkirk, after the Nazis stormed France and the Low Countries in the early, dismal days of WWII. And I bloody hate war movies.

Why? Well, there’s a few main reasons. First and foremost, they always make me feel so much less heroic, which Dunkirk also excels in. Nolan sets his unsteady, take-you-into-action camera on three main storylines: by land, by air, and by sea — each replete with heroes of the highest might. There’s the pilot (Tom Hardy) whose gas gage becomes a ticking clock to ramp up the plenty-high-already stakes, but that doesn’t stop him from bearing down on German bombers in some of the best dogfighting footage since Mav.

“But the biggest reason I hate war films, and one that Dunkirk nails, is they just make me feel so damn sad about the nature of man. How the hell could my fellow man allow things to get so out of hand? Though Dunkirk is visually stunning and, continuity issues aside, a finely crafted film, I found it impossible to stay in the story without thinking about how such death and destruction got started in the first place.”

Then there’s the civilian boat captain (Mark Rylance) and his two boys, who set sail across the channel along with an armada of fellow non-military vessels, hulls full of life vests for the boys left stranded on the beach of France, with German guns and Luftwaffe planes all around. And finally, there’s the men on the beach, both the grunts and the officers, trying to stay alive and help others live throughout a desperate situation. So yeah, heroes all around, except for this one, of course, sitting in the theater thinking of things nitpick about.

But Dunkirk doesn’t just hit that hated war movie trope, it also ticks the haunting-my-nightmares box, too. Have you ever dreamed of drowning to death? How ‘bout burning to death? How about having to choose as you’re beneath the burning sea? Yeah, Dunkirk is that kind of terrifying. But, thankfully not nearly as gory as many war films, which is one the biggest issues I usually have with them. All. That. Blood. Yeah, I get it, war is hell, and you’re going for veracity. But we’re talking about me here, and I’m a pussy. Fortunately, though Dunkirk goes a long way towards making me feel like I’m doing nothing with my life, at least it generally doesn’t make me feel queasy while doing so.

But the biggest reason I hate war films, and one that Dunkirk nails, is they just make me feel so damn sad about the nature of man. How the hell could my fellow man allow things to get so out of hand? Though Dunkirk is visually stunning and, continuity issues aside, a finely crafted film, I found it impossible to stay in the story without thinking about how such death and destruction got started in the first place. Sure, Hitler took death and destruction to new lows, but he was very much a product of the world that made him. Throughout Europe’s history, and civilization’s really, it was just one people trying to eliminate another, rape their women, take their land, and enjoy the new view. What was Hitler doing differently? Other than using more vile means? The ends remained the same. And that’s just goddamned depressing, as Dunkirk thoroughly reminds me.

Alas, Dunkirk gives no pretense of hope, except for maybe in the black and white, good guys vs bad sense of things. But though you might dread being reminded about the horrors of war as much as I do, I suppose a film like Dunkirk also helps you realize we’re duty bound to acknowledge such horrors exist. To shake us from our more enjoyable pop-culture distractions, and remind us that life is fragile, and never guaranteed. Still, as far as entertainment goes, I’ll take escapism every time.