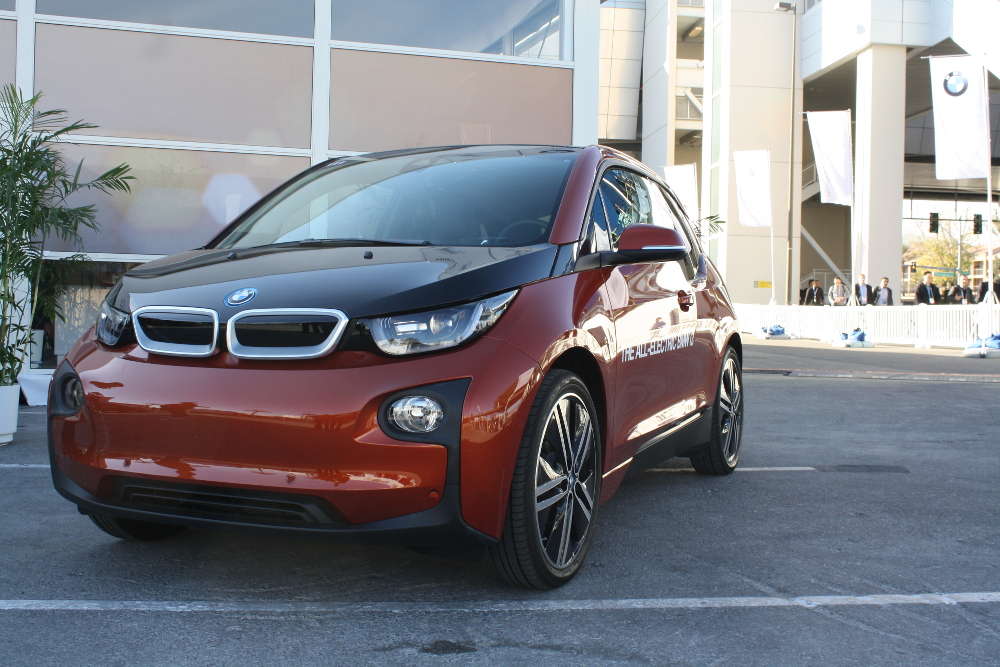 The BMW i3 Wants To Change The World

So you say you want a revolution? Well BMW has been working their Teutonic asses off to bring you one with their new i line. While we’ll have to wait to get our sticky fingers on the i8 sports car, BMW was kind enough to host us in Las Vegas and give us a spin in their pocket-sized i3. It’s a hell of a first shot at the establishment.

Walking up to the i3 is an exercise in identifying surfaces and following creases. This motor is a riot of angles and eye-points. While the BMW kidney grills and badge are present and accounted for, every other part of the design language is unique to the i range. This is great news for those considering an i3 as it means your eco-chariot will not be lost in the tidal sea of 2 and 3 series that populate the roads. we took a spin the sunburst orange and black example and found the colors to perfectly match the futuristic quality of the vehicle. Every i3 will be two-toned from the factory, with the black sections moving backward from the hood and fog lights forming the boundaries of what BMW calls the “functional load compartment.” And while it might sound like a crude reddit caption, they are trying to explain that all the action from both the drive-train and the pilot occur between those black bands.

You could swear the this whip would fit in your pocket. This car is seriously tiny. Visually it appears on par with the Smart car, but the actual dimensions tell a different story. As does the interior. Not only is it roomy inside, but the interior engineers in Leipzig have outdone themselves. If the exterior is all hard edges and creases, the interior consists solely of swoops and curves. It is easy to say that the interior of this vehicle is the most forward thinking and revolutionary part of the whole car. The i3 team clearly started with nothing but a blank sheet of paper and happily entertained ideas from half-crazed graduate students and struggling performance artists. This place is mental. And I mean that in the best possible way. The wood used as trim is unvarnished and coarse. the layout of every nook and cranny is fresh and exciting. the materials are, for the most part, luxurious and upgraded. BMW is clearly thinking beyond the driver here and is aiming on making a huge impression on any passengers’ ideas of what a BMW is.

But BMWs are known for their driving. So how does the i3 stack up to that heritage? The standard i3 is a pure electric car tipping the scales at 2.635 lbs, but we’re tootling around Sin City in the upgraded range-extender version. This option ads a 264 lb convention 650cc gas engine that can generate electricity for the on-board batteries but never physically powers the wheels. Because it’s all-electric, the i3 gets up and gos. 0-60 clocks in at 7 seconds, but being a city car the more interesting figure is its 0-30 time of just 3.5 seconds.

This pocket rocket was thoroughly designed to live its life in our urban environments and it shows. Quick, light steering, fluidic lane changes and sudden bursts of acceleration all make the i3 a downtown dream. The 100 mile maximum range of the power pack also chains it to city centers and developed areas, as does the 30 minute recharge time when equipped with the optional quick-charge package.The most unusual aspect of our drive around the Vegas strip was the rabies-level aggressiveness of the energy capture braking system. As soon as you let off the accelerator, the re-gen system begins to convert the movement of the wheels into harnessed energy and recharges the 450 lbs worth of Macbook batteries. This has the practical effect of forcefully applying the brakes every time you lift off the accelerator. At first blush this process was violent and led to a very see-saw riding experience. Quickly, however, I adapted and learned to stay on the accelerator longer (since there is no such thing as coasting in this car) and only using the actual brakes for aggressive stopping or to come to a complete halt. BMW might very well find it difficult to traverse that learning curve with potential customers during brief test drives. Then again, they can always sell customers on the “one set of brake pads to last a lifetime” angle.

Those Armani cologne sporting salesmen will have plenty of other selling points to use as well. BMW is betting billions on Deutschmarks that the i brand is their future, and the i3 is their volume model for the brand. They have crammed this electric buggy with as much new technology and fresh ideas as it can carry on it 101 inch wheelbase. They want every upwardly mobile yuppy going from their loft to their startup in an electric i3, and they’re off to a good start. Although it packs largely the same drive-train tech as a Chevy Volt, its had the Bavarian magic sprinkled all over it. The i3 is revolutionary for BMW and the upscale EV market, and you can fully expect this revolution to by heavily televised.

Take a stroll through our extensive gallery below for more i3 goodness: