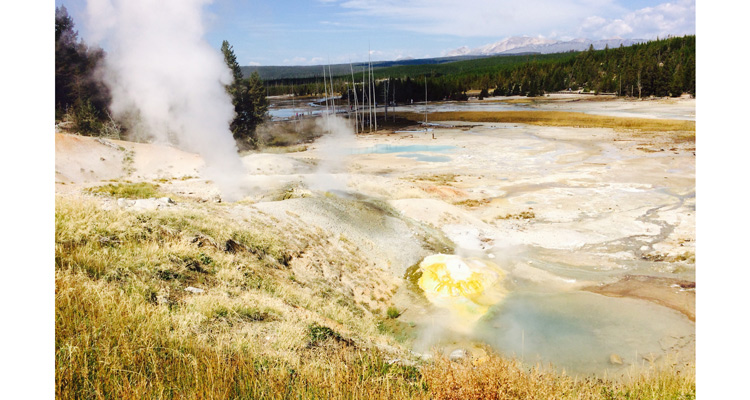 We decided we had seen enough of Grand Teton and given how big Yellowstone is we had to go back in there and find a new environment to set up our camp. We took the tent down and packed the car ready to head to Canyon Village. We bought whiskey and drove back through the gate to Yellowstone straight to Canyon and pitched the tent all over again. On the way, though, we saw a sign for “Mud Volcano” so we made a quick pit stop there. It’s a super strange and interesting mud pit, full of boiling hot water from the lava deep underground which apparently has been steaming and boiling for hundreds of years. 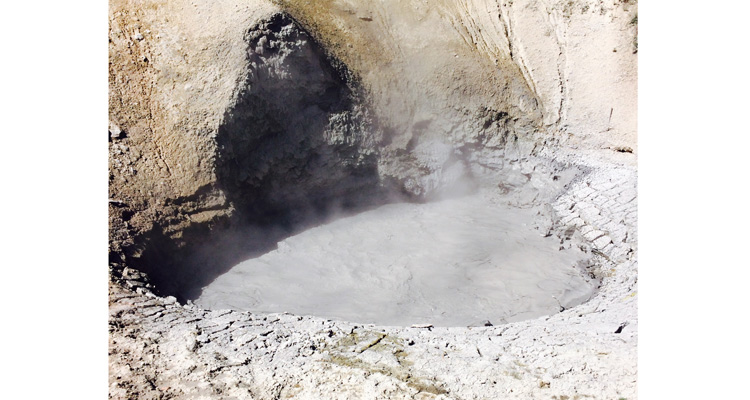 Once we got to Canyon campground and settled in we left to hike the Grand Canyon of Yellowstone. Oh, did I mention how many giant ravens call Yellowstone home? They’re everywhere, and they’re as big as chickens. 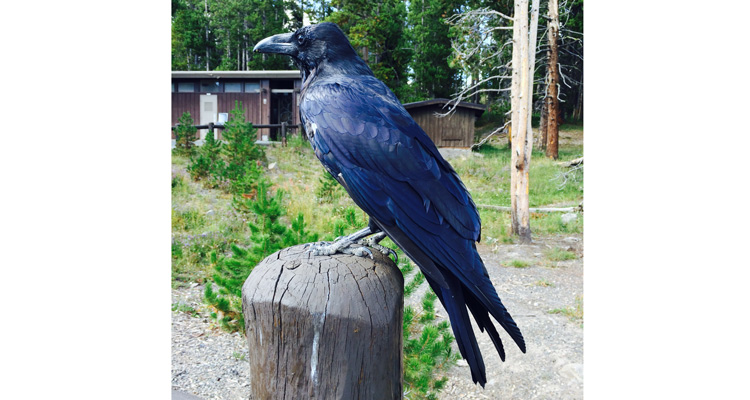 Anyway, we go to Yellowstone’s Grand Canyon (please don’t confuse this with The Grand Canyon in Arizona), and it’s seriously hypnotizing. 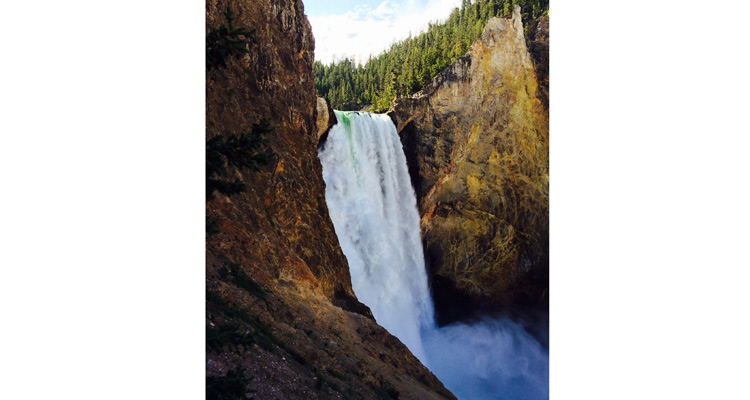 And the waterfalls at the canyon are HUGE. 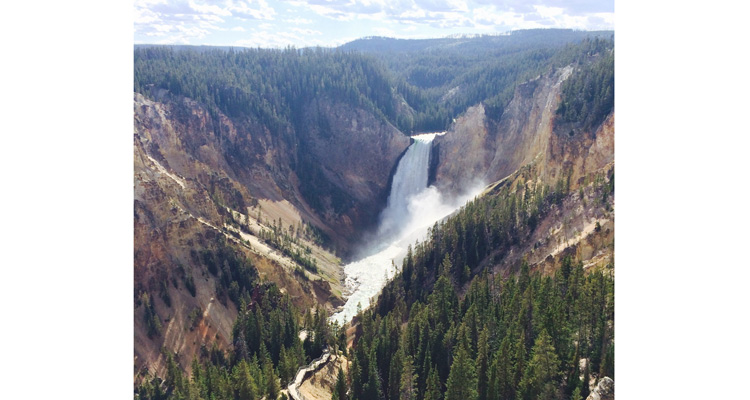 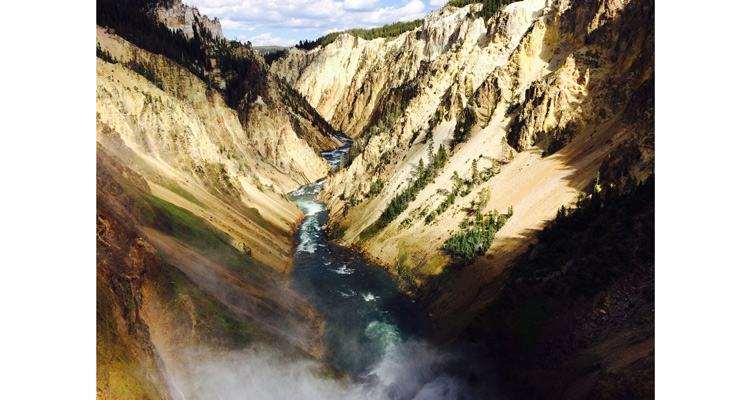 The hikes at the Grand Canyon of Yellowstone were plenty to keep us busy for the whole day, and we went back to Canyon campground before dark to build a fire and prepare for the next day.

We wake up a head out to a tiny village called Mammoth (with a population of about 300), with plans to stop at some geysers on the way. However, it’s important to note that Yellowstone is covered by burnt forest. That’s right, most of the forest there is burnt to a crisp from a seriously major wildfire in 1988 that burned just about all of it down. So along most roads we saw burnt trees like these: 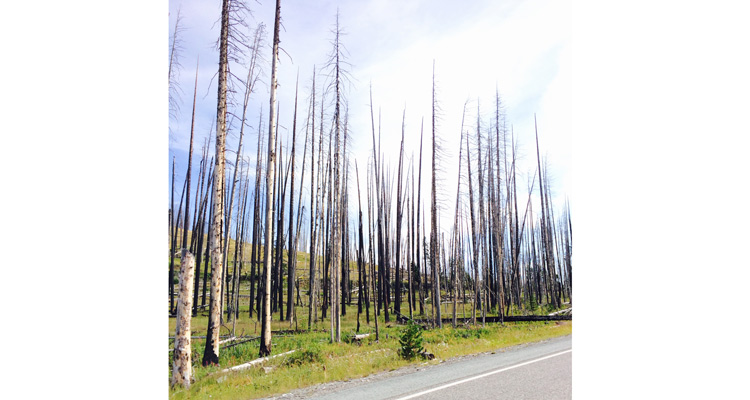 We stopped in a valley covered by geysers with this scary little sign at the entrance: 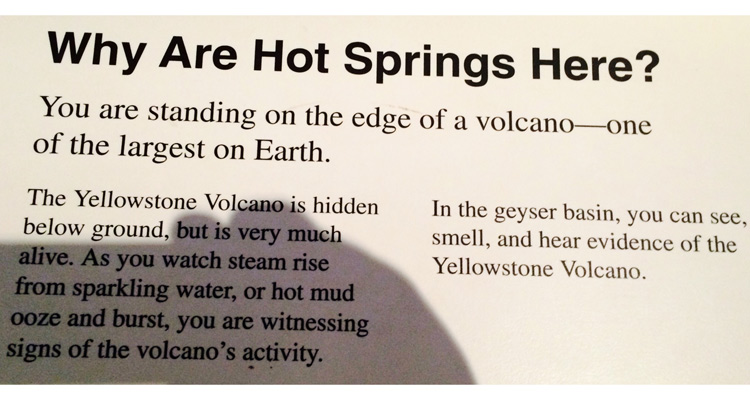 Upon entering, we see water basins, pits and geysers – all of which are bursting with hot steam. The ground is too hot to walk on so there are narrow boardwalks for people to stay on without burning themselves. Any water we saw in this area was boiling hot and would seriously scald anyone who dares touch it. Again, it feels like you’re on an alien planet at Yellowstone. It’s definitely otherworldly.

After checking out that geyser-covered valley, we continued our short journey to Mammoth. First stop on arrival: Mammoth Hot Springs. I can’t emphasize enough how much this place DOESN’T look like planet Earth. The surface is too hot for any vegetation to survive, so it mostly looks like a dead planet around here. 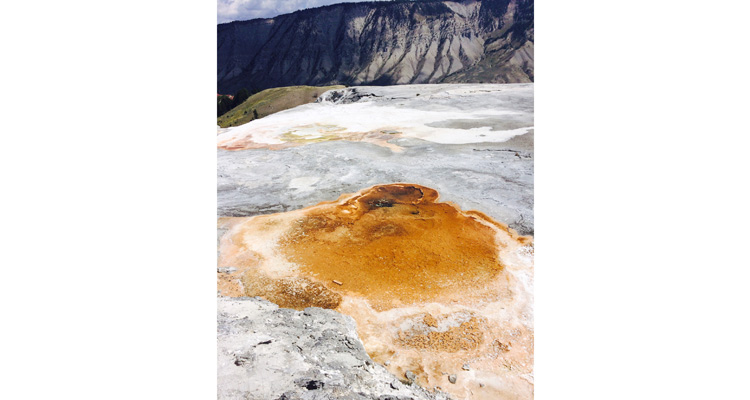 Other parts glisten in the sun by a thin layer of scalding hot water flowing down. 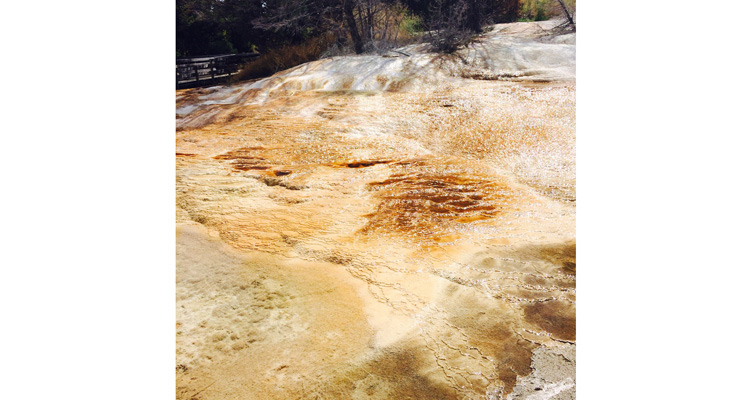 And the rest of the Mammoth Hot Springs is in a terrace-like hillside, too hot to touch. 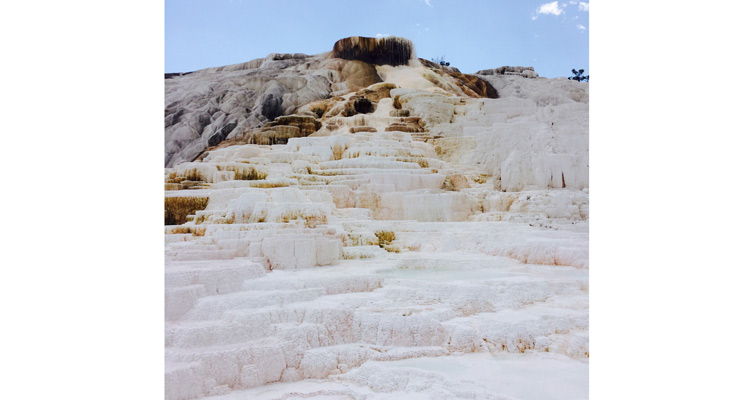 Next, we went into town, in search of hot springs that people can sit in like a Jacuzzi. To get there, we had to cross through the tiny village, and there were elk EVERYWHERE in town. 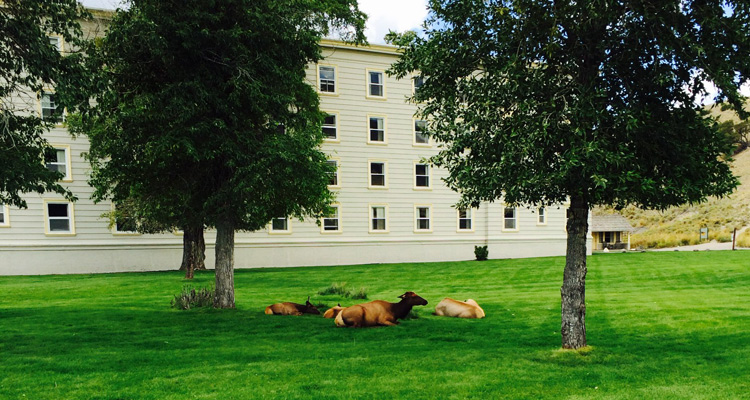 Sure enough, we found our “hot tub” destination. It was a point where an extremely cold river meets a boiling hot spring from the lava underground. When the boiling hot meets the freezing cold, it’s exactly like sitting in a hot tub. So we put our swimming shorts on, grabbed the bottle of whiskey and experienced a true sense of relaxation. It was exceptional. If you are in Yellowstone, go to Mammoth and ask where the hot spring is for people to sit in. It’ll be a major highlight of your trip. Oh, and more elk… 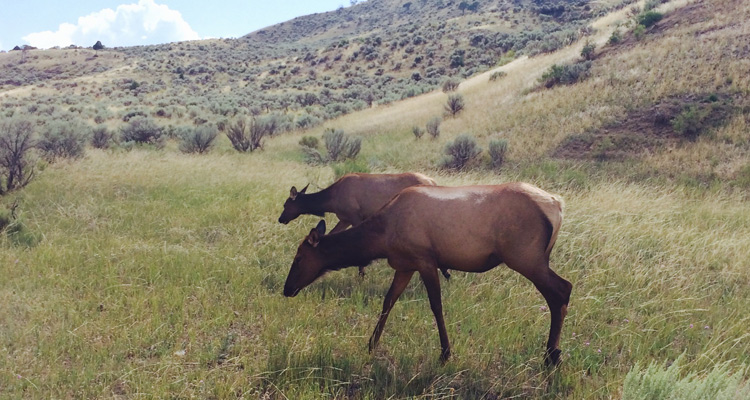 After soaking for a couple hours in the late afternoon, we headed back to the campground and drove through Blacktail Plateau on the way.

One of our main goals of that week was to see wolves and bears, but it was our last day and we still hadn’t seen any. We intentionally set our alarm clocks for 5:00AM because everyone who works in Yellowstone told us the best time of day to see bears is early morning. So we went to Lamar Valley (which we heard was the ideal location to spot bears). We walked around in the early morning fog, equipped with hunting knives, bear spray and binoculars – desperately searching for dangerous animals. To our surprise, we see bald eagles in the distance, and right next to them we spot wolves – three of them. Two gray wolves and a black one. Boom. If you want to see wolves in Yellowstone, go to Lamar Valley in the morning because there are wolf dens there. But be patient and bring binoculars.

We crossed that off our bucket list and continued bear hunting. After a couple hours and no luck, we gave up and went back to the campsite to cook up a meal.

During the entire week, the Ancient Aliens blessed us with perfect weather, so when we arrived back to the tent and it started to downpour with thunder and lightning, we couldn’t complain. We were really tired anyway, so we did our best to start a fire and cook in the rain, then retreated to the tent and took a nap. It was our only shelter.

After a long nap, we woke up and miserably took the tent down, packed our suitcases to prepare for the flight the next morning, and packed the Subaru. We had to leave some stuff behind, like our cooler. However, there is a store relatively close to the park that will ship items home for you at a low price. It’s called Send It Home and they’ll treat you right. Once the car was packed, we drove a couple hours back to Bozeman, but not without saying good-bye to one last elk. 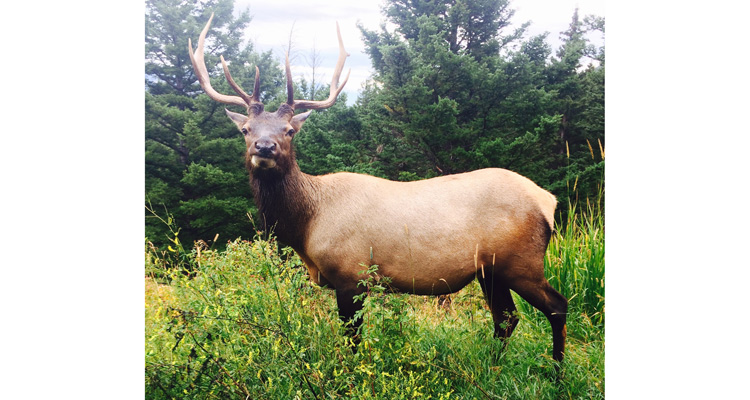 During the ride back, we we discussed how it was really unfortunate that we never saw a bear. And in the middle of that conversation, we spotted a huge black bear galloping at full speed along the road beside us. Then it sprinted it off into the woods. Our mission was officially complete.

We arrived in Bozeman around 10PM, so we decided to kill time by seeing “As Above, So Below” at the movie theater. Despite the shitty ratings, I actually really enjoyed that movie and I definitely recommend it. Go see it for some serious entertainment. When the movie was over, we entered the airport and snapped back to reality.