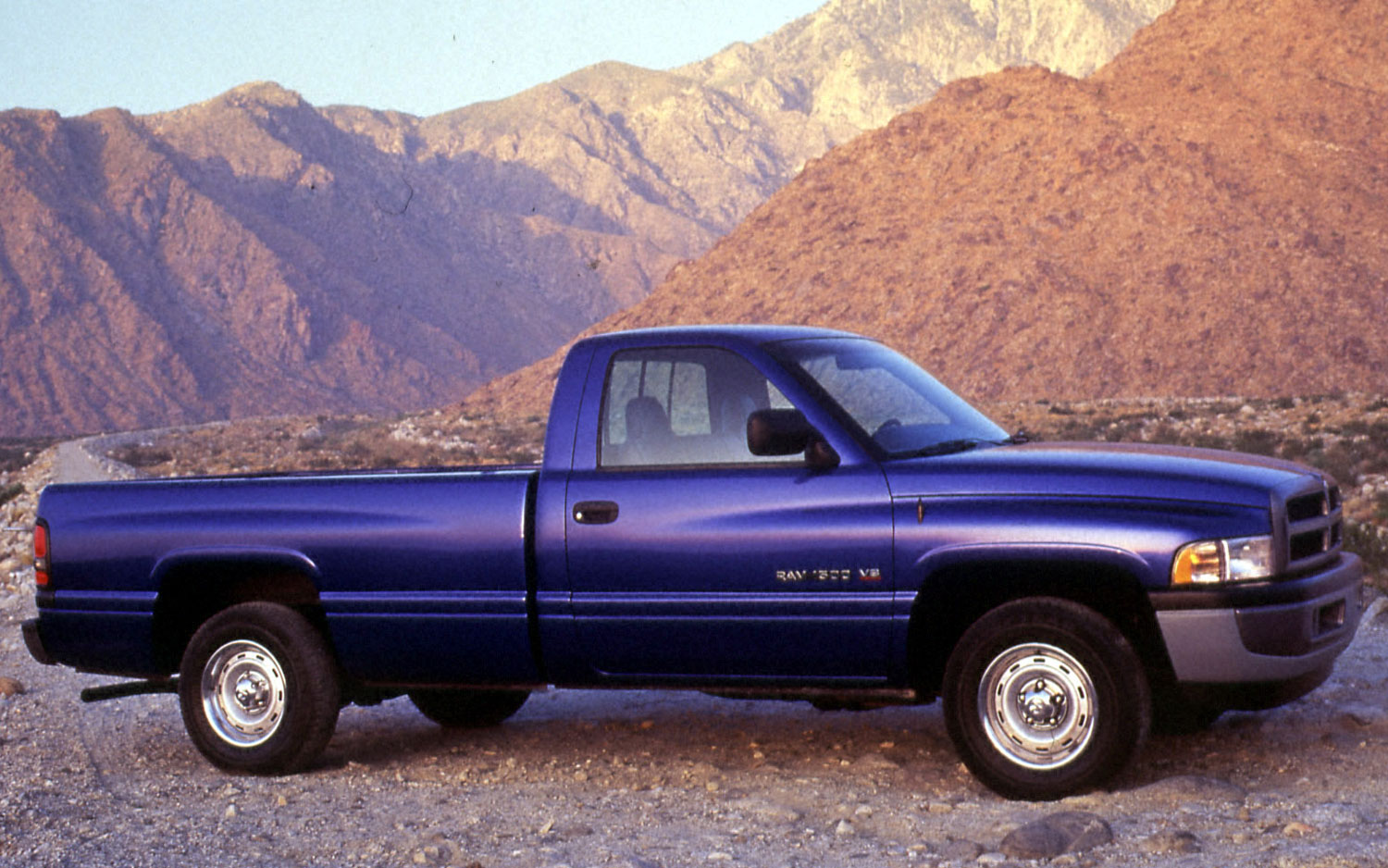 The Dodge Ram is the most innovative truck the Big Three have ever made – and no, I’m not talking about the current Ram with its air-suspension and Eco-Diesel.  I’m talking about the Ram that came out way back in 1994.  It represents a massive shift in design focus.  Before it, trucks were sparse, utilitarian boxes made for work.  People drove them because they had to, either for their job or because their life required cargo-hauling versatility.  After it, trucks increasingly became things to be seen in.  The “lifestyle truck” had been born.

One need only look at the trucks that came before the 1994 Ram, and the ones that came after it to see the paradigm-shift in truck design.  Prior trucks were boxes with boxes out back.  Slab-sided fenders and rectilinear shapes abounded.  The overall air was stern and austere.  The only nods to styling to be found were varying amounts of chrome in the grille, and perhaps a stepside bed for that vintage feel. This was especially true for Dodge, whose Ram was also the oldest design on the market by 1993.  Though the Ram name dated only to 1981, the body was essentially a lightly-refreshed version of what had been introduced in 1972.

Designers at Dodge recognized a need for drastic change.  Sales of their full-size trucks had dropped to less than 100,000 units by the early 90’s.  Given how thoroughly entrenched the pickup market is, drastic new sales were unlikely to be drawn from the competition, so more sales from outside the traditional truck market were needed.

To that end, Dodge decided to be daring with the new Ram’s style.  For the first time, a light-duty pickup was being designed to evoke images of something – specifically, vintage big-rigs and post-war Power-Wagons.  In place of flat fenders you got bulging, stepped ones.  At the front there was a daring prow tapering back in a very carlike fashion to each side.  Centering it all was a very in-your-face crosshair grille.  Even the rear fenders got testosterone-fueled bulges.  Buyers were supposed to feel like they were piloting their very own big-rig.

The market certainly bought it.  Sales skyrocketed – more than tripling in the first year of the new Ram’s life – once the runt of the pickup truck sales figures, the Ram found itself the darling of new truck sales.  Suddenly, people were buying Rams not because they needed a truck, but because they wanted a truck.  Away from cattle ranches and job sites, Dodge pickups were increasingly finding their way to suburbia – doing duty as mundane daily-drivers, rather than beasts of burden.

However, the 1994 Ram’s influence extended beyond sales.  It changed the truck industry.  Ford were first to react in 1997 with their daringly wind-swept F-150.  It too eschewed a purely functional form for a dramatic set of duds.  A more ergonomic, carlike interior showed up as well.  GM were slower to react and more conservative, but by 1999 they had shaved the edges off the GMC Sierra and Chevrolet Silverado, and while the outside shape may have been a more conservative reaction to the newfound styling wave, the inside was notably carlike – at least by the standards of the day.

It’s rare for one vehicle to make such an impact so quickly.  The 1994 Ram changed the way consumers and carmakers alike thought about trucks.  Thanks to an increased emphasis on style, we wound up with the truck market we have today, where the average buyer can be expected to haul little more than air on a daily basis, and where the look of a truck drives the sale.