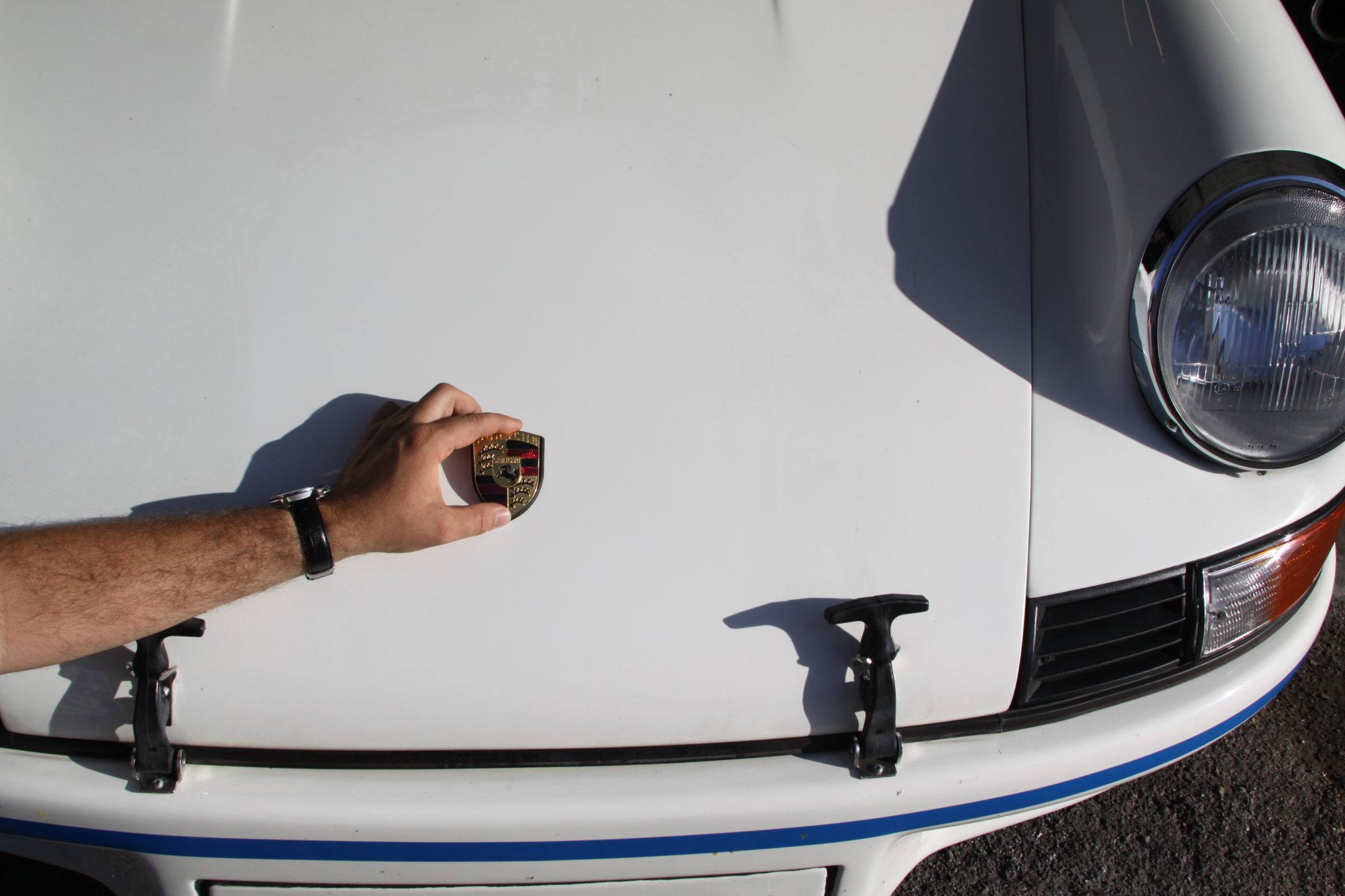 Welcome to the finale of our grand FactoryTwoFour Porsche Backdate 911 Build! Every month we’re going to update you on the broken bolts and knuckles of this project as we turn our Miami Vice 80’s Porsche into a unicorn 1972 RS 2.7. If you’re just joining us, you can catch upon the series here.

In the previous update I passed SMOG, installed the side graphics, and got the car tuned up. So what’s left to do? Fixing some gremlins, installing a performance chip and pretty seats, and a reckoning on just how much this project cost me in time and money. 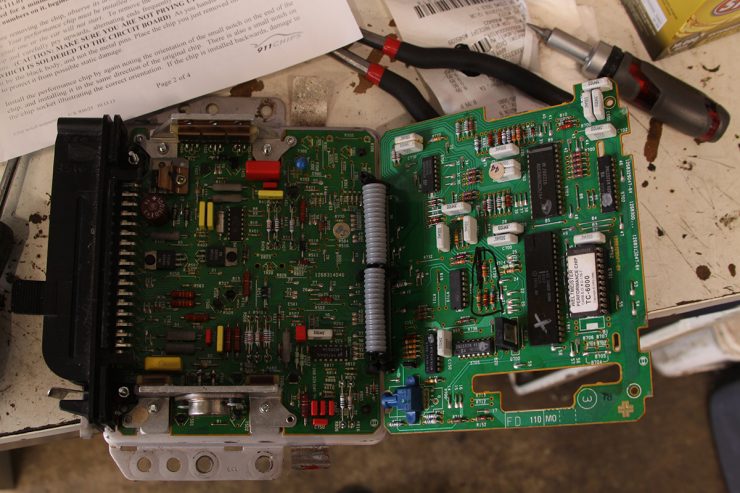 I haven’t done much to finesse the powertrain, save for installing a race exhaust and a performance chip. For the latter, that involved taking out the car’s ancient 1980’s computer, prying off a chip with a screwdriver (fancy!), and installing the 911 Chips doodad. Curiously, when I opened up my CPU I discovered that the car already had a performance chip from a lesser-known outfit installed. Nevertheless, 911 Chips is supposed to be the go-to chip supplier, so that’s what I installed. I’ll give it this, it smoothed the cold engine response and almost eliminated the exhaust drone in 2k-3k range. Well worth it. 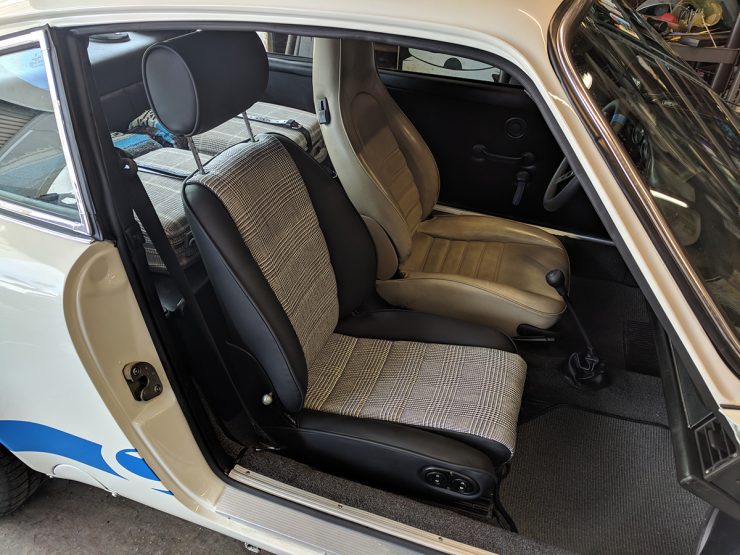 Once the computer was replaced in the car, I could install my new seats from GTS Classics. These are something a little special. I had this great firm out of Texas take their existing Monte Carlo seats and marry them to the motorized seat pan of my factory seats. Vintage look, modern function – pretty much the whole theme of this build.

As to the small problems I’ve been chasing – the transmission hates going into 3rd gear, the doors don’t lock, there’s some minor fit and finish issues with the headliner and sunroof, and it needs an alignment pretty bad. I know this because my set of front tires on the car scrubbed off their outer edge in the blink of an eye. So that was fun.

Basic items first, I took the car into a local Porsche tuner to get an alignment, in case I need to be driving it around to other shops to fix the other items on the to-do list. Luckily, while there, they identified that a small bushing was the cause of my shifting woes and I was able to knock out these two problems at once. The door lock problem was traced back to the fact that I tore out the central locking button, so I needed to bridge a connector to make the motors work. Fixing all these small problems was the easy, and frankly never-ending part. This is a vintage car after all, little issue are going to pop up all the time. The hard part was running the math on what this project cost me.

I’ve saved every part receipt for this project since day one, so the actual collection and addition of the costs was easy. What hurt was running the final SUM function on the Excel sheet and seeing in black and white just how financially irresponsible I am. So let’s just jump right in to my idiocy:

I bought the car, sight unseen on eBay, on October 26, 2014 for $21,000. I then immediately gave myself a budget of 1 year and $10,000 to complete my RS 2.7 backdate. I vividly remember being angered that one forum-user openly mocked these targets and my naiveté. He thought he knew better than me. He thought I had no idea what I was talking about. He thought better mechanics than me have taken twice as long and spent three times the money on just such a build. He was right.

When I got the car in front of me in November of 2014, I carefully calculated that if I worked diligently every night and weekend on the car I would have my dream complete by Christmas 2015. Remember, this was a mechanically sound but ugly Porsche. All I needed to do was install an interior, change the paint color, swap out the hood and tail, and upgrade some mechanicals, . How hard could that be? Obviously since this article is timestamped in 2018, pretty damn hard. All in, this build took me three years two months, and cost me $39,318.17.

I completely failed in keeping to either my calendar or my budget. Tasks that were so simple to put down on a gantt chart turned out to run into snags, both physical and mental. I know, I know – break out the Crayolas and color you surprised. But what I learned along the way to completing this car makes that all worth it. 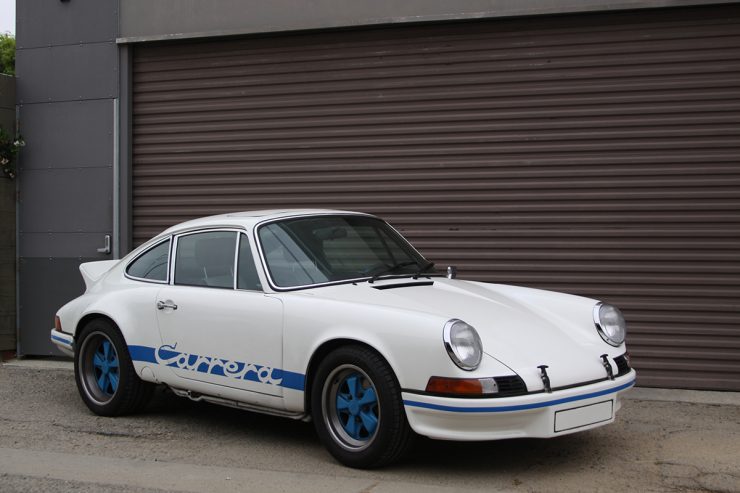 About halfway through the project, I came to look at it as a kind of self-led vocational school. I suddenly was forced to understand how automotive brakes and shocks worked. I had to figure out the fine art of bodywork. And I had to learn how to weld. These things can never be forced from my brain. I can crash this car, but I can’t crash my knowledge. Suddenly, a RS 2.7 became the trophy, with the skills and self-assuredness the actual accomplishment. Over 3 years and 2 months, I learned that I can stick to a cause and sacrifice countless hours and personal time for something I believe in. Spending $40k, I realized what I’m willing to prioritize for my goals. I learned not to sacrifice what I want for what I want right now. I made time with friends count. And I realized that smacking your head against the same problem can be solved by walking away for a few days and letting inspiration come to you. THAT is why this project, and this car is called “The Point”

And you know what? I got a benefits out of this project I never counted on either. I met all my neighbors by being in the garage every night and weekend. I made friends with the more stable homeless people who wandering down my alley at night. I helped complete strangers fix their bikes and scooters. I’m now the go-to guy on my block when your car won’t start, or you need something welded up. I’ve received helping hands from very good friends and complete strangers. I’ve gotten encouraging words at every step along this project from tourists, bums, and good friends.

I can crash this car, this vehicle, this object tomorrow and I’ll still have all of this. This white Porsche is now worth far less to me than who I am now. When I look back after parking, my smile is because I built that – with the emphasis on “built” far more than the “that.” I started a kid who learned from his father how to do an oil change and swap a flap tire, and now I’m the kind of person who has clutch spline grease on his shelf. I’m different now.

Go after your dreams people. Sacrifice what you need to in order to achieve them. Sacrifice time, money, and most importantly who you were when you started. Shoot for the moon, and grab a whole bunch of stars on your way to landing there. It might take you a year, or it might take you 3, but there’s no time limit on improving yourself.

Ready for the good stuff? Here’s the high-res photo gallery of The Point

We could not have done this build without our fantastic sponsors:

If you would like to follow the nitty gritty details of this build, they are posted on a Porsche technical forum here.