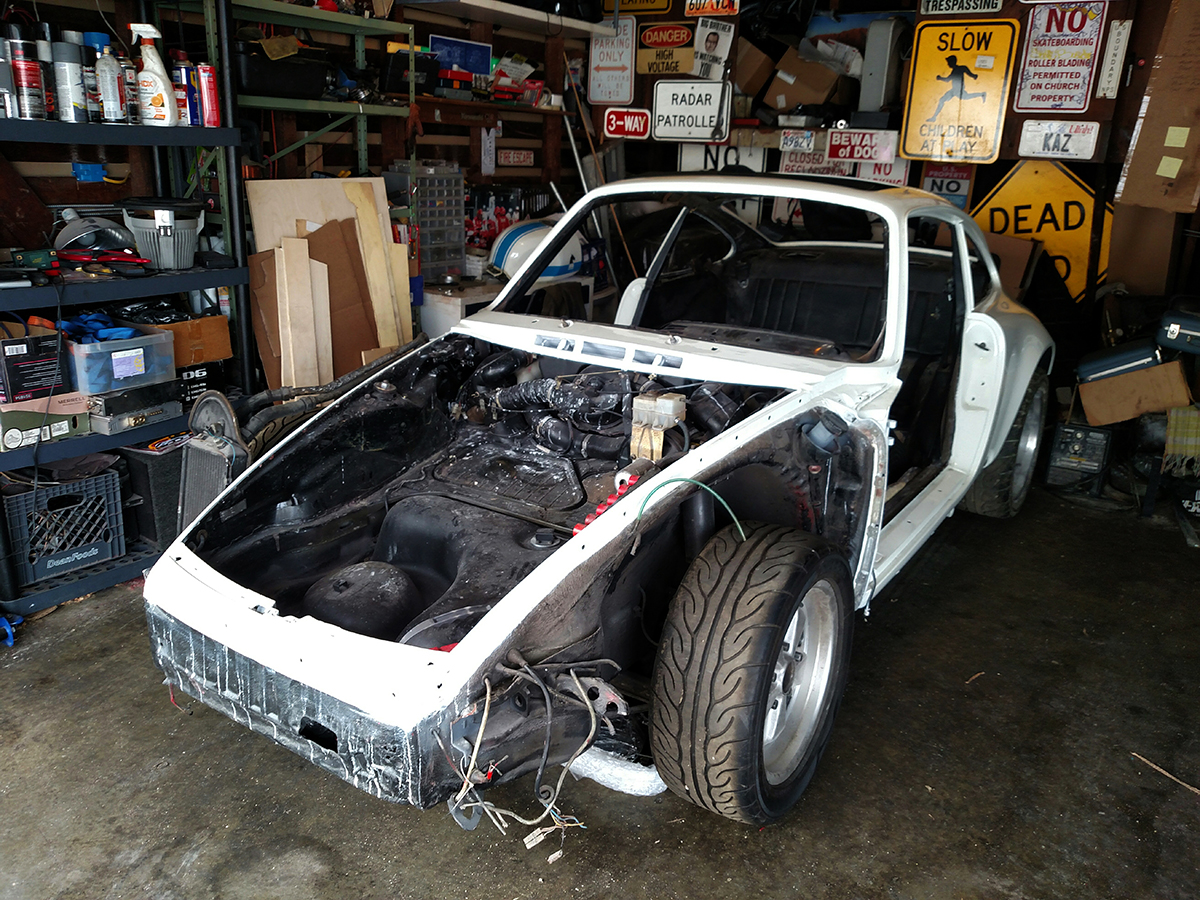 Well it’s been a while since we’ve met here, hasn’t it? Sorry about that. Turns out most paint shops now couldn’t care less about full re-color jobs. Fender bender fixes and insurance claims are their bailiwick now and painting a whole car from bare metal is just a time-intensive distraction for them. For full color changes you’re left with a choice between the ultra-cheap MAACO/Earl Scheibs of the world or ultra premium shops that charge $25k and up. There is no middle ground, or at least there isn’t one in Los Angeles. There was no way I was going to do a bargain job on this, my dream car, There was also no way I was going to spend more on the paint than I did to purchase the car. So I chose to will a third option into existence.

One reason it has taken months to get to this update is all the conversations I had with potential shops trying to talk them into taking on this project. I’d already ripped the engine out, so I couldn’t exactly drive the car around to get quotes. Instead, I was left to email them cellphone pictures and harass them via phone. I can only imagine that getting pics of stripped cars in email attachments from some guy doing a restoration is a paint shop’s favorite thing. After many near-deals that fell through, both on the high end and small shops in the ghetto I finally found a crew that would do the re-color for a reasonable 5k. There’s no way you could have convinced me $5,000 was reasonable at the beginning of this build, but restoring a Porsche has a way of numbing your wallet fingers so here we are.

Even once I found a shop I liked, they decided to take their sweet ass pimp time refinishing my chassis. What was promised as a couple weeks for the whole car turned into two months for just the rolling chassis. Hopefully it’s an example of the old adage that you can choose two out of good/fast/cheap. Oh, and remember all the work I did stripping the car oh-so-carefully to preserve the zinc  (and thus anti-rust) coating on the body panels? Yeah, the shop just sanded it off anyway to give the paint something to bite into to. Awesome. But regardless, I have the chassis back now and it is absolutely glorious. I love this Porsche-correct Grand Prix White more than I love many of my own fingers. Now if only I had the whole car… See, the shop has asked to take the car in pieces and currently still has the fenders, doors, and hoods to go. The chassis is the most important piece right now, however, as it allows me to work on the last major hurdle for this backdate build – the interior.

I’ve separated this build into 3 major components and tackled them in order – mechanic upgrades, exterior refinish, interior refinish. With the first two achieved, we’re finally in the home stretch. 2 years, an uncountable amount of money, and many a late night In-N-Out burger has brought us here. I’ll just take this moment to remind you that I originally called this build at 12 months and 10k. Those predictions disappeared about as fast as strong pornography left at the Vatican.

So now I’ve got this awesome white body shell that I often just stop whatever I’m wrenching on and stare at, and I am happy in a way unknown to the science of man. I’ve got a special little project planned for the interior that is either going to be legendary, a quagmire of terrible, or both knowing the internet. I’ll show you that next time, for now I’m going to go back to staring at my suddenly white car.