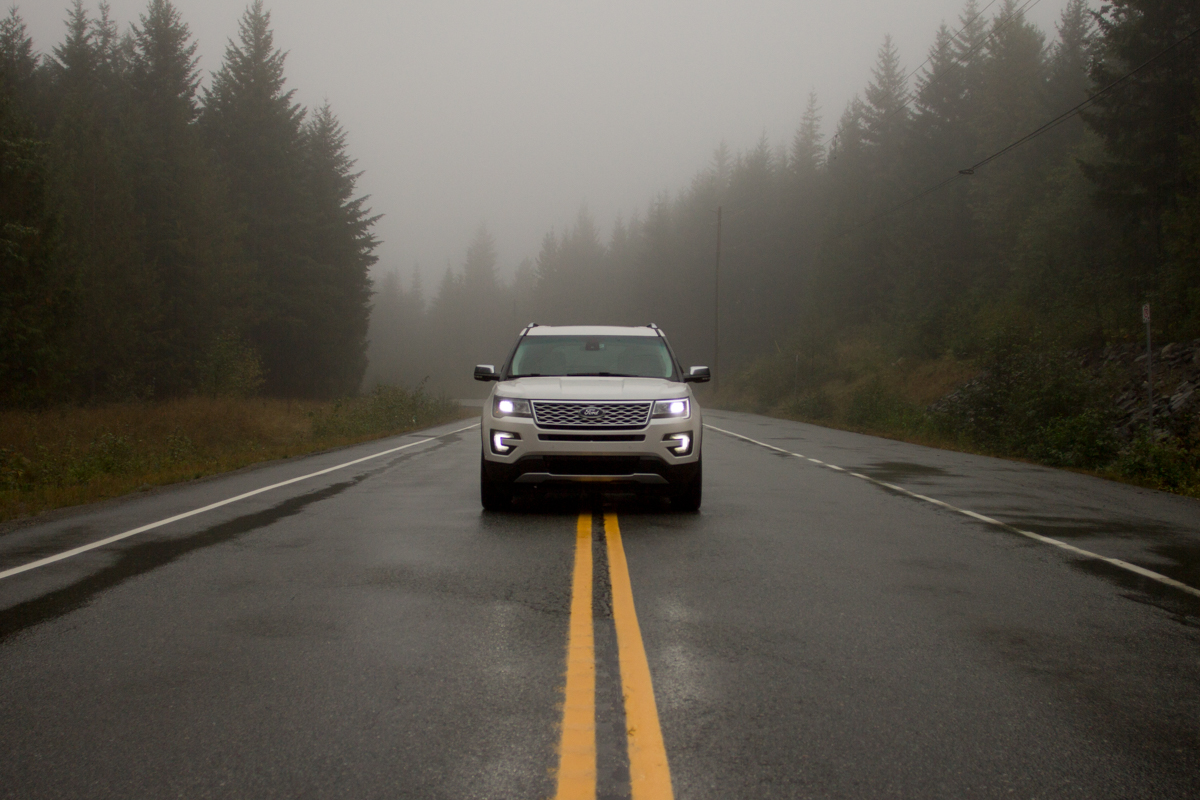 A spacious full size SUV, the Explorer has been given a new lease of life with the introduction of the 2016 model. In Platinum trim, it ranks higher than any other example in the range and, true to its moniker, it brings additional refinement to an American icon.

Apart from its imposing dimensions, which create a powerful impression at first glance, the 2016 Ford Explorer Platinum’s exterior is a suppler reinterpretation of the previous iterations of the vehicle. More aerodynamic and more modern looking, its satin chrome grille rests between a pair of falcon-like Halogen headlamps with signature LED lighting. Elegant chrome ornaments decorate the length of the car’s body, underlining its stature; in the rear, the silver dual exhaust tips subscribe to the same theme of refinement.

Included as part of the XLT Appearance Package, the 20 inch bright-machined face alloy wheels with dark tarnish-painted pockets make the Explorer stand out in traffic, as their silken facade complements the Platinum Explorer’s silhouette. Several convenience features, such as the rain-sensing wipers, the sensor activated power liftgate and automatic LED headlamps offer additional ease of mind.

Behind the tinted privacy glass, standard for the second and third rows, an ample interior unfolds. Three rows of seats allow up to seven occupants inside the SUV, with the third fitted with a 50:50 power folding bench. The boot capacity, with all seats in place, measures 21 cubic feet; with both the third and second rows folded, it rises to a respectable 81.7, allowing for the stowing of long objects and heavy cargo. We were able to store our bags out of the way, as well as have plenty of room for souvenirs collected along the way throughout the back country.

Leather upholstery with quilted inserts covers the entire interior, augmented by genuine wood veneer and aluminium inserts. Ambient lighting and the generous dual panel moonroof help create varying ambiance levels, depending on the time of day, disposition and necessity. A powerful 12 speaker Sony signature audio system with an output of 500 watts with Clear Phase and Live Acoustics technology envelops you in an unprecedented sensory experience. Simply put, the quality of the music played even over streaming was incredible, providing more than the auditory experience than what is found in vehicles double its price.

Residing underneath the power dome bonnet, a 3.5 litre EcoBoost V6 is in charge of powering the Explorer. Providing an output of 365 horsepower and 350 ponds feet of torque through the means of turbocharging and direct injection, the power plant replaces the former, less efficient V8 unit. A SelectShift six speed automatic transmission comes standard, while a refined Intelligent 4 Wheel Drive system, which adjusts the drivetrain in real time relative to the driving conditions, insures your piece of mind, even in the harshest conditions – on or off-road. Heading over each mountain pass, up random mountain roads, there was never an instance of not enough power hitting the road.

What can I say more about the 2016 Ford Explorer Platinum that hasn’t been said before? This standard of the road SUV has been taken to the next level, elevated to elegance that has not been seen before, and yet even with each of its creature comforts, there is no denying that this Explorer belongs with the big boys of European quality.