Costa Rica is Central America’s Switzerland – it’s in the middle of it’s landmass, it is neutral in local conflicts, and it is a dream vacation destination. The general theme with traveling south of Texas is that the flight might be fairly pricey, but once you get anywhere down there it is chuckle-inducing cheap to get around within the respective areas and countries. Costa Rica certainly holds true for that. $20 sit down meals for two were common, and we were hardly trying to be frugal. There are certainly things that are a waste of money, so allow me to guide you through a visit, locals style:

Get out of the capital

San Jose, the capital of Costa Rica, is a hole. And I hate it. A lot. The only bad experiences during our FactoryTwoFour trip happened in San Jose. From terrible food, subpar lodging, to hours-long traffic jams, San Jose is the home of it all. Land, get off the plane, sleep there if you MUST recuperate, but get out as soon as you can. The rest of this beautiful country is so much more interesting.

Driving in CR is full-on  Mad Max. Rules are for the weak and soon to be dead. Yes, the public transport here is cheap and ubiquitous, but you don’t want to deprive yourself of the pleasure and adrenaline rush of piloting a rented Daihatsu through mountain roads full of switchbacks at night. Also, many of the main highways are very new and a joy to drive on. We’re already planning a supercar or motorcycle trip through the country.

Among Costa Rica travelers, there’s a bit of beef between those that swear by the Caribbean coast, and those the say only the Pacific is worth visiting. Squash that beef and visit both. The Pacific had far and away the best surfing while we were there, but the Caribbean had better coastal towns and friendlier locals. The country looks a lot easier to cross than it is, but it is certainly worth half a day’s drive to go from one coast to another halfway through your trip.

Stay in a jungle treehouse

You came down here for the jungle didn’t you? Well there’s nothing more Tarzan than staying in a treehouse. There are a multitude of treehouse to choose from, between all-inclusive resorts to small Airbnbs. No matter what you choose, you’ll have an other-worldly time waking up to howler monkeys or flocks of exotic birds. This is the kind of accommodations that memories are made of. While you’re at it…

The Airbnb options in CR are just too varied and good to ignore. Pass by all the luxury accommodations meant to make old white people feel safe and mingle with people who actually live there. From expats to locals, all are offering up pretty breathtaking and comfortable rooms or cabins for you to relax in. These are also the people who will steer you towards the hidden spots and attractions, while helping you avoid the tourist sections. We stayed in all Airbnbs, and we didn’t regret a single night, and at around $60 a night, it’s hard to go wrong. Hell, at that price double book and sleep in the one you like the most.

Airplane bars are a thing – enjoy them

No joke. For some reason, airplanes in the middle of the forest are all over Costa Rica, and they are all bars or restaurants. The quality of food varies at each, but what the hell, you’re in an airplane!!!

From arroz con pollo to roadside ceviche, the eating in CR is legit. And inexpensive. Expect to pay under $10 for every meal, and that’s with a bottled water (because safety) and an appetizer or side (because fat kid). The best spots are in out-of-the-way diners along the road and are full of locals. The worst spots are along the tourists stretches and are full of Germans or Swedes. Choose wisely. One spot in need of a particular shoutout is El Pescado Loco. Located in the Pacific surf town of Dominical, this eatery serves up fresh fish tacos and the best fried pickles in the country. Finally, do yourself a favor and pop into a local grocery (called Supers) and pick up a bag of Yipys. Take a sugar wafer and add vanilla cream and you have something close to these little bundles of goodness

Swim under a waterfall

What’s more picturesque than that? There are several options in the country to choose from (especially on the coasts), and doubtless you’ll find yourself fairly close to one no matter where you are staying. This is what feeling alive is like. Which is a great way to sum up what it’s like to visit Costa Rica. As the man said, “If you have the means, I highly recommend it.” 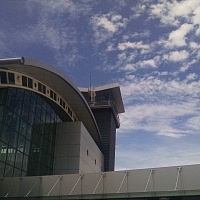 Arrived at San Jose Airport after a redeye flight from LAX, tired but ready to conquer the country 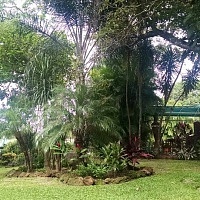 Our first stay just outside the city gave us an early peak at the views we had in store for the trip. 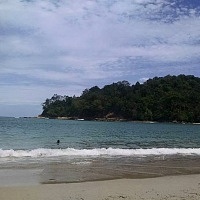 2nd day we arrived at Puerto Viejo on the extreme South side of Costa Rica’s Caribbean coast. Bad surfing this time of year but excellent people, great food, and new friends to remember. 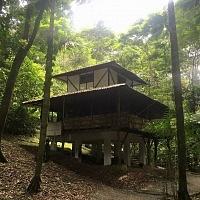 Proper Tarzan-level accomodations, all the way down to the Howler Monkey morning wake up call. Great way to kick off our trip. 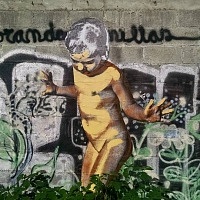 The best street art we found during the whole trip was this wheat paste on some abandoned shell Viejo. Not a big scene in Costa yet. 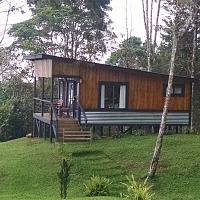 Our third stay was in the central mountains of the country on a large mountaintop estate run by the nicest couple. They took us on a forest walk through their property, made us great meals, and gave is the low down on where to visit next. 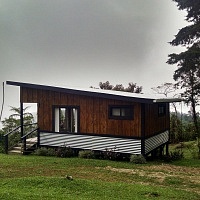 Our modern cabin was perched right at the top of this lush mountain overlooking several small sugarcane-farming towns. Waking up to this view in the clouds was not terrible. 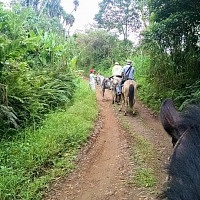 We took a private horseback ride through their property with a couple of nature guides and saw our first sloth. 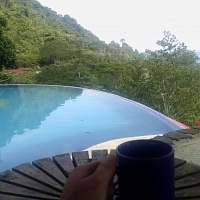 Our final and longest stay was on the Pacific coast at Dominical. Our residence was a large hillside villa at among several other North American couples. We learned some French, found the amazing Costa Rican candy called a Yipy, and I’ve certainly worked in worse offices than this cabana. 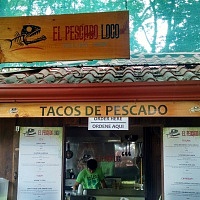 One night at a local bar we met some expats who just purchased this restaurant. Great guys slinging some great food. Best fried pickles in the country. Period. 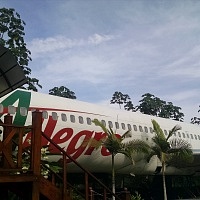 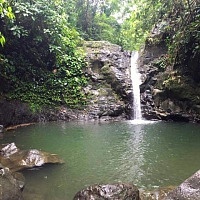 On one of the few rainy days we took a hike up to this secluded waterfall for a swim. Naturally we ignored caution and judgment and slid off the waterfall right into the pool. Totally amazing and the best $2 spent during the whole trip. 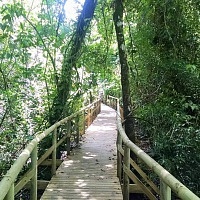 Heading North up the Pacific coast we stopped by a national park that included forest walks and several beaches. 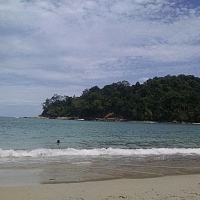 The beach in the park was beyond picturesque with soft white sand and a calm lagoon overlooked by dense forest. 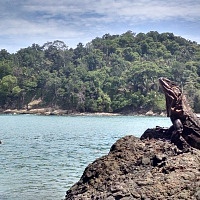 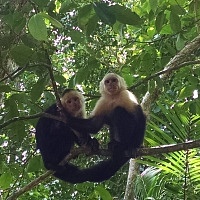 In the national park we made some new friends named Sid and Nancy. They wanted to share our food but we just weren’t on those items yet. 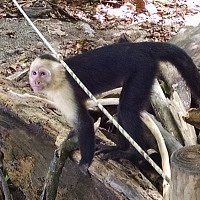 Sid was a little troublemaker, but he made a mean margarita. 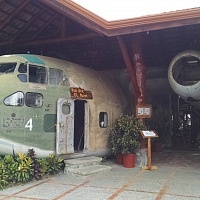 These plane/bars a were becoming a theme, this one up the Pacific Coast just outside the national forest. Extra points here for constructing a whole building around it. 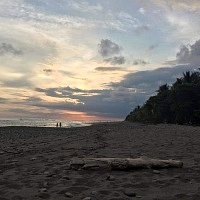 There were so many stops and experiences I couldn’t be bothered to photograph, mostly because I was living them, but this collection will have to do. Costa Rica was amazing, the people always generous, and the experiences many and varied. It is the perfect place to unplug and reset a lot of your priorities. Can’t wait to go back.


Error: API requests are being delayed for this account. New posts will not be retrieved.